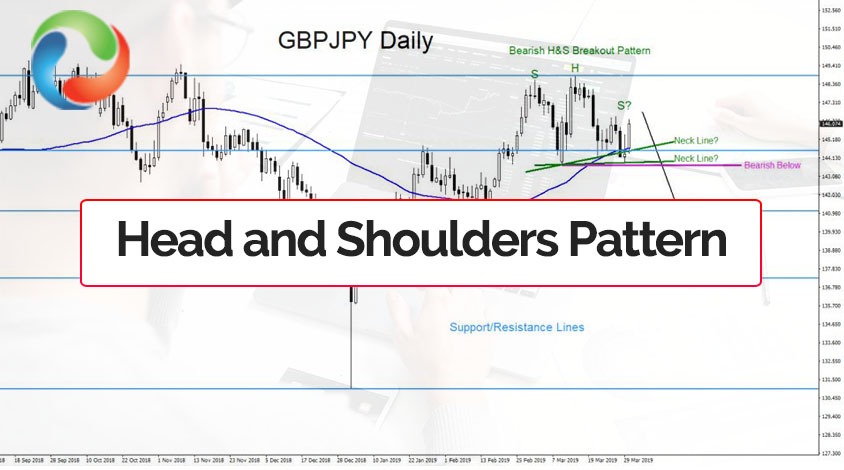 What is Head and Shoulders Pattern?

The center peak is the highest and the other two side peaks are of roughly the same height. The Head and Shoulders pattern occurs when the price of security starts rising, marking the bullish trend, and reaches a new high level. However, the rise in prices is short-lived and the prices start to drop. This drop in prices is not for long when the bullish trend makes a comeback and the prices escalate reaching new higher levels. Price starts dropping again after reaching the highest level, marking the bearish trend. The prices rise again when the bullish trend makes another comeback. This time the price fails to reach the previous high.

The chart formation of the Head and Shoulders pattern is one of the most reliable to predict the reversal in the market trend from bullish to bearish.

The Target is calculated by measuring vertically from the highest point of the chart to the Neckline. The neckline is drawn through the troughs on either side. It is then projected downwards from the breakout. 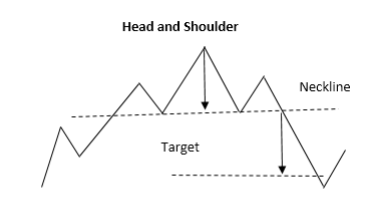 Get to know the best covered call stocks to buy now.

The chart formation of the Inverted Head and Shoulders pattern is one of the most reliable to predict the reversal in the market trend from bearish to bullish.

The Target is measured vertically from the lowest trough to the Neckline. The neckline is drawn through the peaks on either side. It is then projected upwards from the breakout above the neckline.

The Head and Shoulder Neckline is very important in understanding and trading this pattern. The neckline is drawn manually on your chart. To draw the line you need to identify the two bottoms of the pattern-the bottom just before the formation of the head and the bottom just after the formation of the head. These two bottoms are then connected with a line. One noteworthy point here is that the neckline can be horizontal, inclined and in some rare cases declined. The inclination of the neckline has no impact as long as the price movements follow the Head and Shoulder Pattern.

The breakout point is the most crucial for trading as this signal indicates an action on the part of the trader. It occurs when the pattern completes its course and hits the neckline.

Let’s take an example of a fictional stock – PIB, in real life trading.

How to Interpret Head And Shoulders Pattern

The Head and Shoulders Pattern is the most practical technical analysis tool which is used to evaluate and calculate the minimum expected range of price movement from the neckline. It also indicates when the market trend shifts from bearish to bullish and/or from bullish to bearish. Once traders understand how to recognize this pattern, the Head and Shoulders Pattern can be one of the most effective tools the traders can implement in their trading strategies.

The volume of the market has a lot of value in the Head and Shoulders Pattern. Normally volume, of shares traded, increases with rising prices. In the Head and Shoulders Pattern, the volume generally picks up when the first (or left) shoulder is formed. The first shoulder is formed amongst the highest volume indicating the aggressive nature of traders. Next, the head is formed with a comparatively lesser volume which reflects the buyers aren’t as aggressive as before. And with the last shoulder, volume further shrinks indicating that the buyers are currently pausing their trading activity. From this point onwards, the focus of the traders is shifted on selling,  because of the downward trend of prices. The chart hits the neckline and the pattern completes itself. Once the pattern breaks the neckline the volume is expected to rise again.

The Head and Shoulders Pattern has no limitations in terms of time. It can be formed in a few minutes to a day to a month. However the longer the timeframe, the more chances of success increase.

Trading the Head And Shoulders Pattern

Trading the Head and Shoulders Pattern should be done with caution and patience. You should let the pattern complete its course before trading upon it. If the Head and Shoulder Pattern starts to form, you should not act instantly on the assumption that it will fully develop. The market is always volatile and unpredictable. Changes take place rather quickly. Hence, you should let the pattern fully form itself.

Once you observe a Head and Shoulders pattern starting to form, it should be observed only. No trades should be made upon partial or nearly complete patterns till the chart reaches the breakout and crosses the neckline. The wise approach here to hold your trades, plan according to the pattern, note down your entries and stops, and profit goals. Once the breakout point is reached then you can act instantly.

When a regular Head and Shoulders Patterns is developing, your expectations should be that the price will eventually move below the neckline. For that, first set a profit target for the stock by calculating the height of the head peak to the neckline. Then open a short position when the pattern completes its course and reaches breakout.

In the case of an Inverted Head and Shoulders Pattern, your expectation should be that the price will eventually move above the neckline. For that, first set a profit target by calculating the difference between the lowest trough ( the head of the pattern) and the neckline. Then take a long position when the pattern completes its course and reaches breakout.

One advantage you have in both these cases is that you can exit near the target you have set or choose to hold it till the price moves in a favorable direction. Always remember to set your stop-loss orders.

If you are interested in making money out of this pattern like a pro, there are a few basic rules you need to watch out and follow.

A wise trading strategy always incorporates its risk tolerance level in all its trades. Therefore, you must choose your trades carefully while keeping in mind how much risk can you absorb. The Head and shoulders Pattern has proved itself to be a reliable pattern in the chaotic market trends. Moreover, it is fairly easy to recognize. We don’t guarantee that this pattern is 100% accurate but when this pattern shows itself on the chart and signals a major trend change it also signifies a major profit opportunity. Learn how Elliott Wave Forecast can help you improve your success.