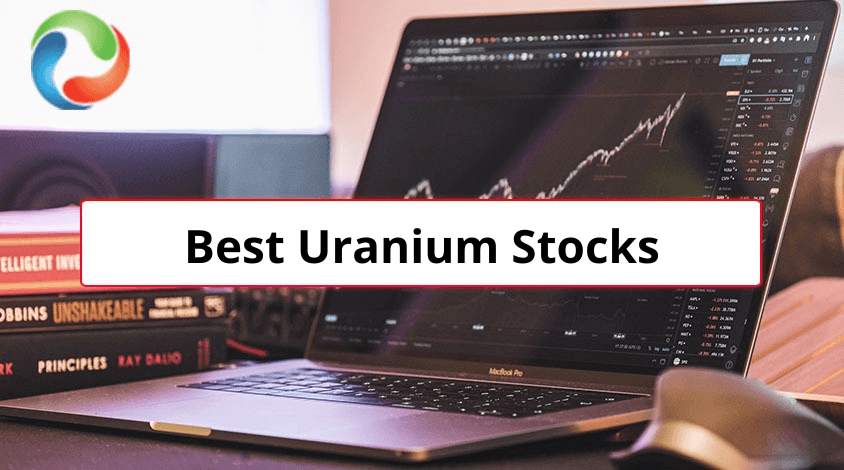 Uranium is a heavy metallic element that has been used as a reliable source of energy for many years. It is naturally found in the Earth’s core. Uranium is of very high value. Despite the high value, it is found abundantly in Earth’s core.

Its value can be identified from the fact that one kilogram of uranium can generate energy that is equivalent to the production capability of about 1,500 tons of coal. Semiconductor stocks are also one of the best investment opportunities.

The top 10 countries that produce uranium are:

Uranium has become increasingly popular because of the rise in the nuclear energy industry. It plays a vital role in the production of nuclear energy which is expected to fuel the future energy demands. Because of its high value and increasing demand, there are a few factors that highly affect the price of Uranium. These factors are:

Since the start of 2022, there have been announcements from countries like the United States, the United Kingdom, France, South Korea, and Belgium. These countries are focusing on preserving and expanding the life of their existing reactor fleets as well as on building new reactors. There is also momentum building for non-traditional commercial uses of nuclear power around the world such as the development of small modular reactors and advanced reactors, with numerous companies and countries pursuing projects. Investing in Long-term stocks involves building wealth over a long period.

Best Uranium Stocks for Investment in 2022

Cameco ( NYSE : CCJ ) is one of the largest global providers of the fuel needed to energize a clean-air world. For three decades, Cameco has been safely and reliably producing uranium and nuclear fuel products to generate electricity at the world’s nuclear reactors. Oil stocks are one of the riskier yet most profit-generating sectors.

Cameco has interests in tier-one mining and milling operations that have the licensed capacity to produce more than 30 million pounds (our share) of uranium concentrates annually, backed by more than 464 million pounds (our share) of proven and probable mineral reserves. The company is also the leading supplier of uranium refining, conversion, and fuel manufacturing services. Cameco proudly owns Canada’s largest employers of Indigenous people, and land holdings are spread around 2.1 million acres.

The below chart shows the production volume of Uranium by Cameco:

There has been a significant pipeline of contract discussions in a strengthened price environment. Since the beginning of 2022, the company has been successfully adding 40 million pounds to its portfolio of long-term uranium contracts. 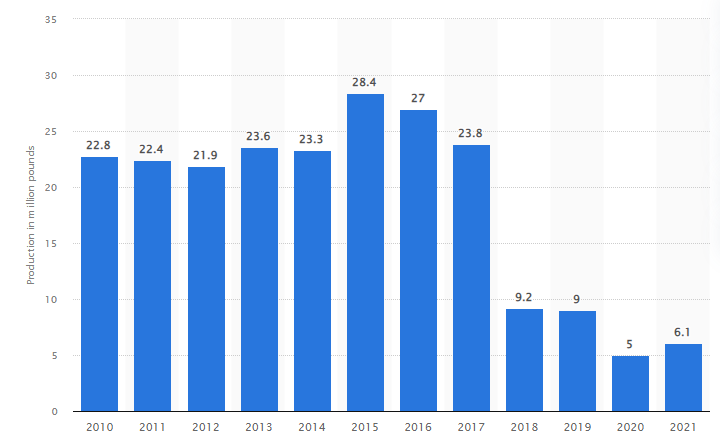 NexGen Energy ( NYSE: NXE ) is a Canada-based company which is focused on being the largest low-cost producer of uranium, globally, all the while incorporating the highest levels of environmental and social governance. If you are seeking a steady stream of income, you should invest in REIT stocks.

Canada is the world’s second-largest producer of uranium, with approximately 13% of global production. NextGen Energy is amongst the active mining companies.

The Company has a strong portfolio of highly prospective projects:

NexGen Energy has a market capitalization of around $ 2.3 billion. Its shares are trading at a price of $ 5.04. The below chart shows the stock performance for the past two years.

Despite multiple dips and peaks, the stock has maintained an upward trend. In 2021, the stock rose from $ 2.76 to $ 4.37, representing an approx. 60 % increase throughout the year.

Uranium Energy Corp ( NYSE: UEC ) is America’s leading, fastest-growing, uranium mining company. UEC is a pure-play uranium company and is advancing the next generation of low-cost, environmentally friendly In-Situ Recovery (ISR) mining uranium projects. The Company has two productions ready ISR hub and spoke platforms in South Texas and Wyoming, anchored by fully licensed and operational processing capacity at the Hobson and Irigarayan plants. Get to know the best vaccine stocks to invest in now.

Uranium Energy has other diversified holdings of uranium assets:

Uranium Energy has a market capitalization of $ 1.14 billion. Its share is currently trading at $ 4.03. The below chart shows the stock performance for the past two years.

With a production-ready capacity of 4 million pounds and a substantial pipeline of additional projects, UEC is the next-generation producer, ready to provide low-cost, low-capital fuel for the country’s large electricity-generating nuclear fleet. Hence it is one of the best Uranium stocks to invest in with huge growth potential.

Energy Fuels ( NYSE: UUUU ) is the leading U.S. producer of uranium – the fuel for carbon- and emission-free nuclear energy. It supplies U3O8 to major nuclear utilities. The Company also produces vanadium from certain of its projects, as market conditions warrant, and is ramping up to full commercial-scale production of RE Carbonate. Get to know the list of crypto mining companies that are leading the industry.

The White Mesa Mill, which Energy Fuels own, is the only conventional uranium mill operating in the U.S. today. This facility has a licensed capacity of over 8 million pounds of U3O8 per year and has the ability to produce vanadium when market conditions warrant.

During this quarter Energy fuels did not report any Uranium Sales. But it is actively engaged in pursuing selective long-term uranium sales contracts.

Energy fuels have a market capitalization of over $ 1 billion. The share of the company is trading at a price of $ 6.46. The below chart shows the stock performance for the past two years. Get to know the best tech stocks to invest in now.

Energy Fuels continue to benefit from increases in the prices for all of the critical elements and materials they produce. U.S. uranium and nuclear fuel suppliers may be seeing increased interest from U.S. utilities as a result of the $6 billion civil nuclear credit program, which prioritizes reactors that purchase nuclear fuel and uranium from U.S. suppliers, which would include Energy Fuels.

Therefore, it is the best time to invest in Energy Fuels to take advantage of the expected growth of the company in the near future.

There are many trading blogs designed for individual investors that are interested in choosing individual buzzing stocks.

Denison ( NYSE: DNN ) is a uranium exploration and development company. Its exploration and development portfolio consists of numerous projects covering approximately 280,000 hectares in the Athabasca Basin region. The Athabasca Basin is home to the world’s largest and highest-grade uranium mining and milling operations – including the McArthur River and Cigar Lake uranium mines, as well as the Key Lake and McClean Lake uranium mills.

The flagship project of Denison Mines, Wheeler River, is the largest undeveloped uranium project in the eastern portion of the Athabasca Basin region. Exploration activities are ongoing, with a current focus on the discovery of additional high-grade uranium deposits.

During the year, other operational highlights include:

Denison Mines has a market capitalization of over $ 1.01 billion. Its shares are trading at $ 1.24. The below chart shows the company’s stock performance over the past two years.

Centrus Energy is a trusted supplier of nuclear fuel and services for the nuclear power industry. Centrus has world-leading expertise in uranium handling, nuclear fuel design, and criticality, and is working collaboratively with the advanced reactor community to develop next-generation nuclear fuel. Centrus has designed, manufactured, and successfully operated the world’s most advanced gas centrifuge enrichment technology, the American Centrifuge, which has undergone rigorous testing by the Department of Energy and is available for national security deployment.

At its 440,000-square foot, state-of-the-art Technology & Manufacturing Center in Oak Ridge, Tennessee, the company’s team of scientists and engineers transform innovative ideas into proven designs and high-quality products and components. With deep technical expertise and capabilities, a billion-dollar order book, and long-term supply agreements through 2030, the company is well-positioned to support its customers and the growth of the nuclear industry.

Uranium Royalty Corp. is the world’s only uranium-focused royalty and streaming company. URC provides investors with uranium commodity price exposure through strategic acquisitions in uranium interests, including royalties, streams, debt, and equity in uranium companies, as well as through holdings of physical uranium.

Ur-Energy engages in the identification, acquisition, exploration, development, and operation of uranium projects. Ur-Energy owns and operates the Lost Creek in-situ recovery uranium facility in south-central Wyoming. The company has produced, packaged, and shipped approximately 2.6 million pounds U3O8 from Lost Creek since the commencement of operations. The company holds interests in 12 projects located in the United States.

Ur-Energy has recently filed its second-quarter results for the year 2022:

Westwater Resources Inc is an explorer and developer of mineral resources that are materials essential to clean energy production. It holds mineral rights in the Western United States and the Republic of Turkey for both lithium and uranium deposits, as well as licensed production facilities for uranium in Texas.

The company recently shared its second quarter results for the year:

The stock of the company has been on a downward trend since 2021. The stock started the year 2021 at $ 4.93. After an initial spike when the stock spiked up to $ 9.01, the stock started declining. This bearish trend continued till the end of the year and closed at $ 2.15 representing a 56 % decline during the year.

Rio Tinto Group is an Anglo-Australian multinational company that is the world’s second-largest metals and mining corporation. It engages in the exploration, mining, and processing of mineral resources. It operates through the following business segments: Iron Ore, Aluminium, Copper and Diamonds, Energy and Minerals, and Other Operations.

In 2021, Rio Tinto produced approximately 65,000 pounds of uranium. The company’s uranium production has seen an overall decline from a peak of 11.4 million pounds in 2010.

Rio Tinto has a market cap of $ 87.9 billion. Its shares are trading at $ 52.83. The stock has been exhibiting volatile behavior in the past two years.

In 2022, the stock continued its volatile behavior while steadily declining. The stock last closed at $ 52.64 representing a 21.4 % decline to date.

The demand and need for green energy projects are on the rise due to the continuous increase in global energy consumption. Many leading countries like China and Russia are focusing on nuclear power energy. The future of uranium stocks seems promising, and now might be the right time to invest. The increased awareness regarding renewable energy resources is making governments more inclined to approve nuclear projects in different countries.

The uranium stocks listed above have been carefully selected after analyzing the historical performance, market cap, company outlook, and capital management & leadership. Moreover, with the global acceptance of nuclear energy, these top uranium stocks are expected to benefit hugely. Therefore, the best time to invest in these companies is now to enjoy explosive growth in the investment portfolio in the near future