As we have mentioned, every trader besides ability to forecast the market well, should also have good psychology and good money management in order to be successful. One of the most important things is to know how to manage the risks well and keep them as low as possible. As the rule says, you shouldn’t risk more than 2% of your account for each trade you make. If you find a 2% rule overrated and you think being consistent to it is irrelevant, keep reading this blog and you’re going to find out how bad money management could affect your trading account.

Take a close look at the chart below. It’s showing performance review of 4 traders, getting exactly the same trade setups just taking different risks. All of them are starting with the same initial capital of $50.000, with the same entries, stop losses, take profit areas and same risk/reward ratio (1:2). The performance review covers a 3 month period, from January 4th to March 20th 2016, with the exception of Purple trader who ended trading after 2 days, discouraged by a huge drawdown. 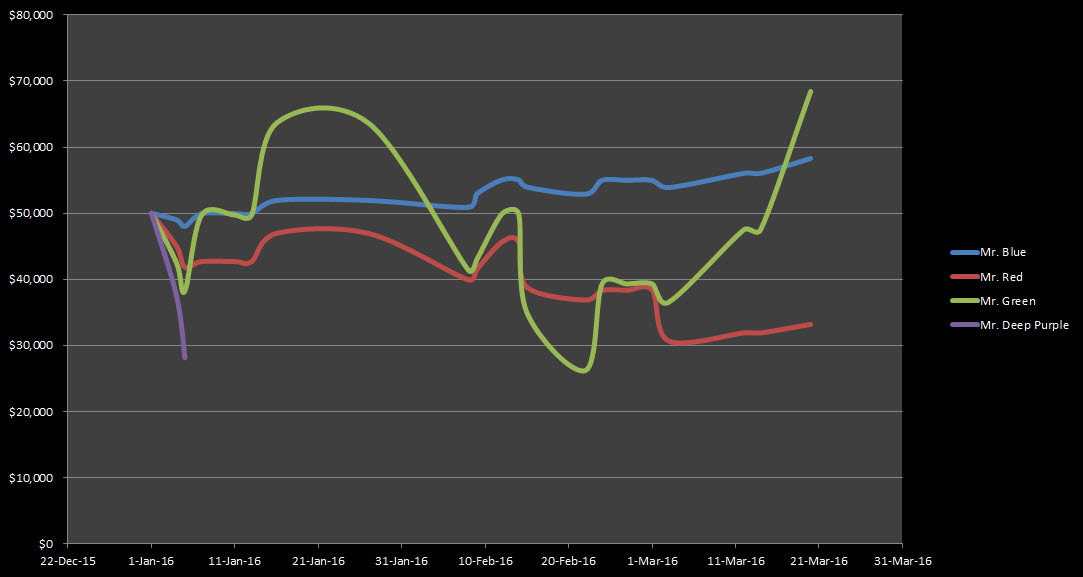 Now, let’s pay attention to each of these traders individually. For this purpose we’ll call them Mr. Blue, Mr. Red, Mr. Green and Mr. Deep Purple.

We’re going to start with Mr. Deep Purple, the guy who made only two trades which obviously didn’t turn out as he expected. His total loss was $21875 which wouldn’t have happened if he didn’t take really high risks of 25% for each trade. He was discouraged by having a huge drawdown, losing 43.75% of his equity in just 2 days and quit trading right after. This is what his trading review looks like.

The next guy is Mr. Red. He was taking risks randomly, led by emotions like greed and fear. He was self-confident and started with 10% risk at the first trade. As the trade ended a loss, he decreased risk in the next one to 7%. His third trade was positive, but as he risked 1%, he made only 2% of profit (as risk/reward ratio is 1:2). Encouraged by this positive trade, he was gradually increasing risks, until he made another loss on 8th February. As you can see at the table below, Mr. Red was increasing the risks after the series of good trades, and decreasing them after the bad times. He lost 33.64% of initial capital which is $16822. 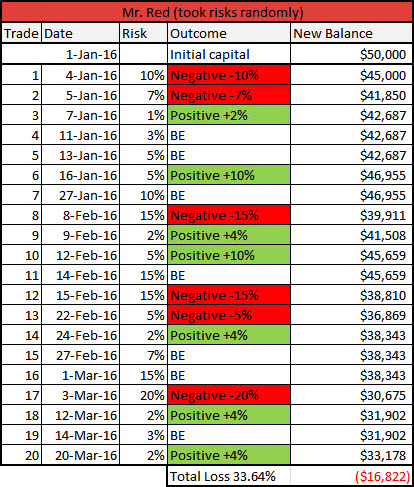 Mr. Green is one lucky guy. He managed to “survive” and even made profit of 36.85% by choosing wild risks randomly. He went for all or nothing and made it out of a deep loss at the end. It’s important to understand that this way of trading is wrong and usually results with a loss of all the equity sooner or later. This trader made profit of $18425, which is 36.85%. You will find the rest of the details in the table below. 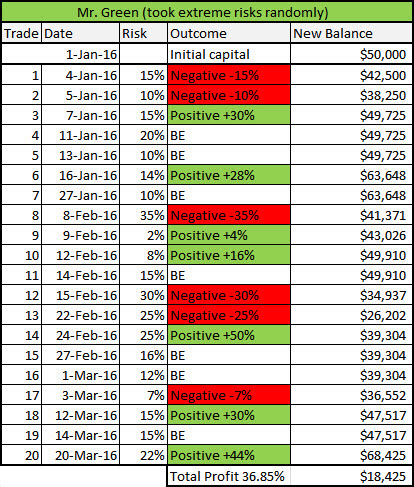 And finally, we’ve got Mr. Blue, the smartest guy. He knows for sure how to protect his capital. He was risking only 2% per each trade. With each negative trade he lost only 2% and with each positive won 4%. At the end, he made profit of 16.56% in 3 months, which is $8283. This is the way professionals trade. 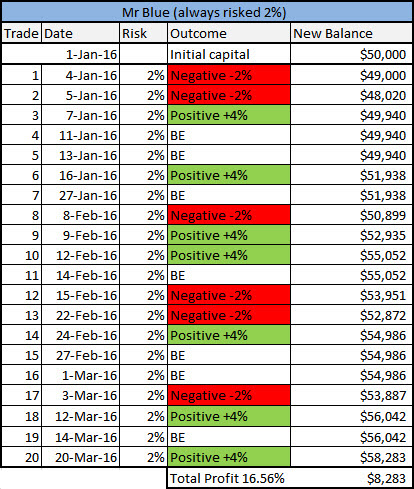 Just to remind you again that all traders were having exactly the same trade setups, but the only difference was the amount of risks the traders were taking. In case there’s anyone unfamiliar with the term BE, it stands for Break Even – the trade was closed right at the level of entry with zero profit or loss. The Risk/reward ratio was always the same, we used the average value 1:2.

Elliott Wave Forecast keeps you on the right site of the Market, providing you with High probability trading Setups. Through time we have developed a very respectable trading strategy which defines Entry, Stop Loss and Take Profit levels with high accuracy and allows you to make position Risk Free, shortly after taking it, protecting your account. Our market experts educate members constantly through live sessions, also providing you with money management and trading psychology tips. So, with us you keep growing not only as an Elliott Wave analyst, but also as a trader.

We cover 78 instruments in total. We present Official Trading Recommendations in Live Trading Room.  If not a member yet,  Sign Up for Free 14 days Trial now and get access to new trading opportunities.