Good news Singapore traders and those who trade Straits Times Index (STI). STI is a Singapore benchmark stock index, and below I will do a technical analysis in the Weekly and Daily time frame using Elliott Wave Principle. This index is currently not part of the 42 instrument covered by EWF. After watching the videos and reading the commentary below, if you are interested to learn more about Elliott Wave or how we can help you, feel free to join the 14 days trial (we have free 14 days trial promotion until mid June 2015). 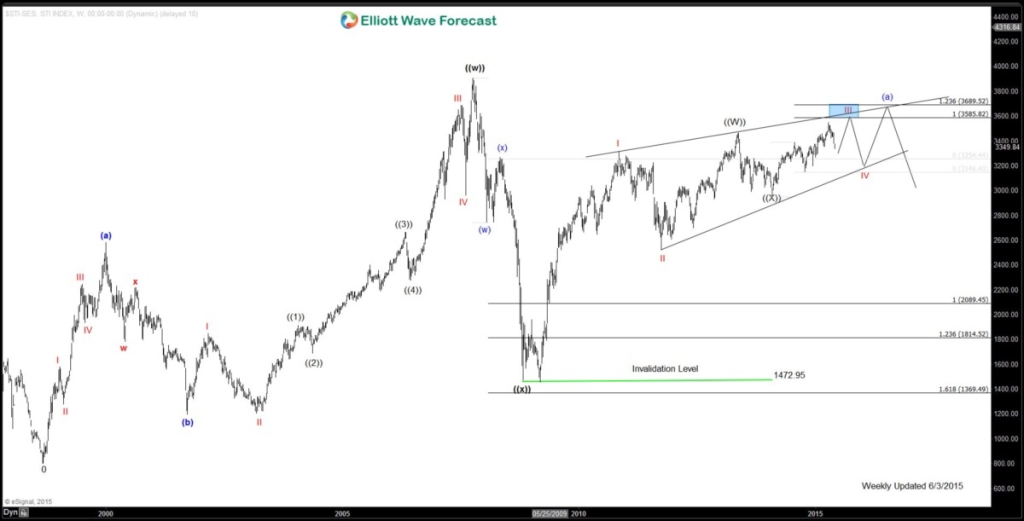 According to Wikipedia, following a major sectoral re-classification of listed companies by the Singapore Exchange, which saw the removal of the “industrials” category, the STI replaced the Straits Times Industrial Index (STII) and began trading on 31 August 1998 at 885.26 points, in continuation of where the STII left off.

We hope you enjoy our analys is. At EWF we offer professional-grade analysis and 24 hour coverage of 42 instruments from Monday – Friday using Elliott Wave Theory as primary tools of analysis. We provide Elliott Wave chart in 4 different time frames (weekly, daily, 4 hour, and 1 hour time frame), up to 4 times a day update in 1 hour chart, two live sessions by our expert analysts, 24 hour chat room moderated by our expert analysts, market overview, and much more! With our expert team at your side to provide you with all the timely and accurate analysis, you will never be left in the dark and you can concentrate more on the actual trading and making profits. Click for 14 days Trial

Hendra Lau of the Elliottwave-Forecast.com Team