On Tuesday, the White House published a list of 1300 Chinese products subject to tariffs with total value of $50 billion. It’s however still subject to a review process which will last through at least May before it takes effect. The U.S. list focuses on high-tech item such as semiconductors and lithium batteries while seeking to minimize the impact to American consumers. Trump’s administration has taken this measure as the U.S. wants to re-balance the massive $500 billion annual trade deficit with China. In addition, Trump has accused China of unfair business practice with its policy of requiring US companies to surrender their intellectual property in exchange of access to China’s market. President Trump tweeted that this intellectual property theft amounts to an additional $300 billion annually.

Only hours later, China swiftly issued a counter list of US products subject up to 25% tariff, and the total amount matches the U.S. list at $50 billion. Market’s initial reaction was unfavorable as the trade war’s escalation between the two largest economies in the world could damage the global economy. China’s counter list includes item such as aircraft, machinery, and soybean among other things. Soybean futures dropped more than 5% as the U.S. producers export half of their products to China. Shares of companies that could face retaliatory Chinese tariffs also fell Wednesday. Boeing dropped 1% while machinery producer Caterpillar down more than 1%. The Dow Jones Industrial Average fell more than 500 points in early trading before rebounding and closing up nearly 1 percent.

U.S. stocks recovered later during the day as the market realizes that despite all the rhetoric and threat from the two parties, the tariffs are still subject to review and won’t take effect until the next few months. In the meantime, the two sides have begun talks to resolve the differences and thus many believe that the dispute can be settled at the negotiation table.  Still, the lack of a clear end game gives uncertainty to the market in the short term. The market hates uncertainty and thus any strength in the market should likely prove to be limited.

Below we will take a look at three sector ETF within the broader US Indices in Financial, Consumer Staples, and Healthcare to get insight into the next direction in the market 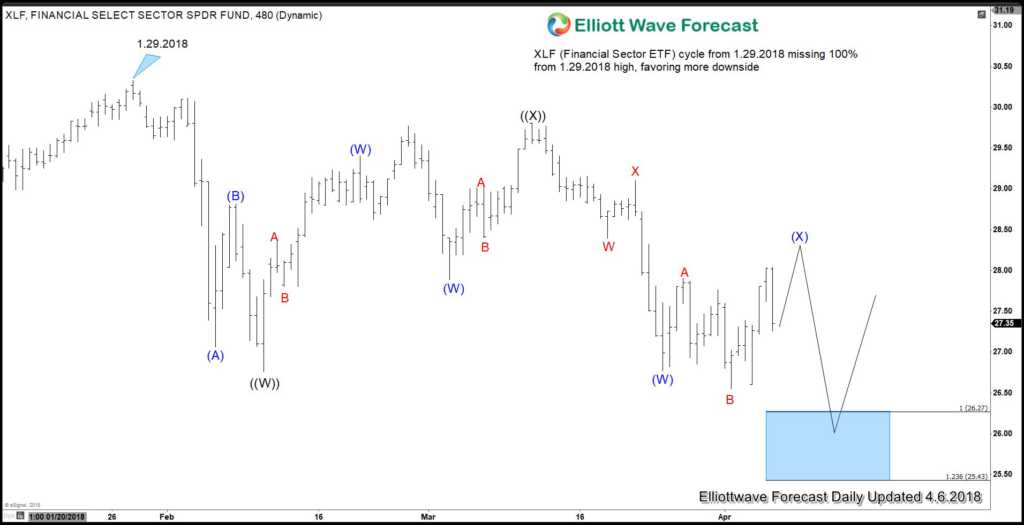 XLP cycle top also starts from the same date at Jan 29, 2018. The decline is also unfolding as a double three Elliott Wave structure where Intermediate wave (W) ended at $52.66 and Intermediate wave (X) ended at $56.26. The instrument is still missing the 100% extension towards $48.42 – $49.92 area, thus favoring further downside.

The uncertainty on the trade war between U.S and China should provide a cap to any strength in the global equities. Looking at the technical outlook of three major sectors within the broader Indices in Financial, Healthcare, and Consumer Staple sectors, we can conclude that further downside is still expected.

If you’d like to get further analysis, take our 14 days FREE trial to get access to Elliott Wave charts for 78 instrument, trading signal, 24 hour chat room, live sessions and more. Welcome to EWF