In this technical blog, we are going to take a look at the past performance of Elliott Wave Charts SPY, which we presented to members at elliottwave-forecast. In which, the rally from 23 March 2020 low unfolded as a 5 wave impulse structure. Thus suggested that it’s a continuation pattern. And as per Elliott wave theory after a 3 waves pullback, it should do another extension higher in 5 waves impulse structure at least. Therefore, we advised members not to sell the instrument & trade the no enemy areas ( blue boxes) as per Elliott wave hedging remained the preferred path looking for 3 wave reaction higher at least. We will explain the structure & forecast below: 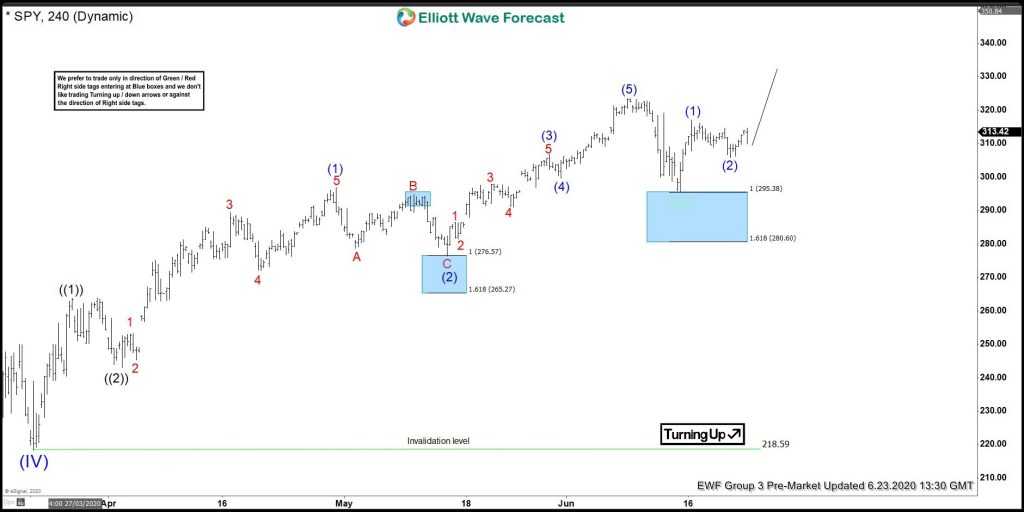 Here’s 4 hour Elliott Wave Chart of SPY from 6/23/2020 Pre-Market update. In which the ETF is showing reaction higher taking place from the blue box area. Allowed members to create a risk-free position shortly after taking the longs. However, a clear break above 6/08/2020 prior wave (5) peak ($323.41) still needed to confirm the next extension higher & avoid double correction lower.

If you are looking for real-time analysis in SPY along with other US Stocks & ETF’s then join us with a Free Trial for the latest updates & price action.

Success in trading requires proper risk and money management as well as an understanding of Elliott Wave theory, cycle analysis, and correlation. We have developed a very good trading strategy that defines the entry.

Stop loss and take profit levels with high accuracy and allows you to take a risk-free position, shortly after taking it by protecting your wallet. If you want to learn all about it and become a professional trader. Then join our service by taking a Free Trial.