Air travel has become so commonplace that it would be hard to imagine life without it which made the airline industry is vital to our world. It contributes to global economy by connecting cities / countries and it enables the flow of goods / people.

In the past, the airline industry was at least partly government owned. This is still true in many countries, but in the U.S. all major airlines have come to be privately held. However, in recent years, there has been an industry-wide shakedown, which shifted the industry’s trend towards expanding domestic and international services and turned the industry to exists in an intensely competitive market

Cost of air travel has also been steadily declining and much of the benefit passed on to passengers: IATA (International Air Transport Association) estimates the 2016 average airfare before taxes at $375 which is 61% lower than 21 years ago, corrected for inflation.

The Airline industry return on capital in the recent 3 years exceeds the cost of capital which is considered as historic achievement. IATA forecasts 2018 to be the fourth consecutive year of above-cost-of-capital returns for investors.

Return on capital invested in Airlines 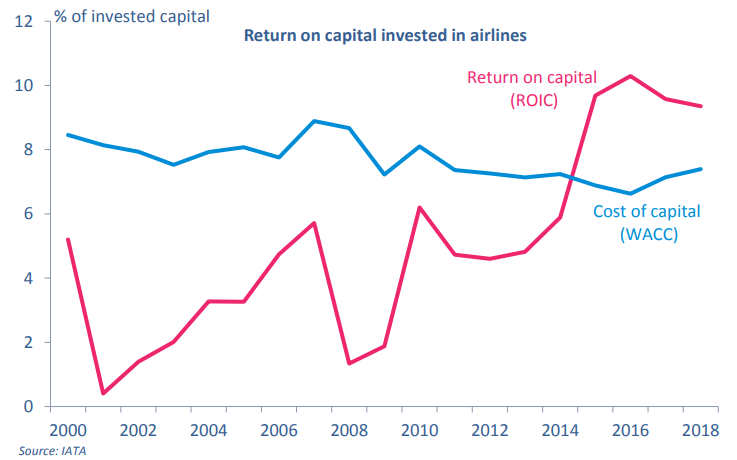 Since 2010, the global commercial Airline profitability remained positive for 8 consecutive year which helped a lot of business to grow bigger. 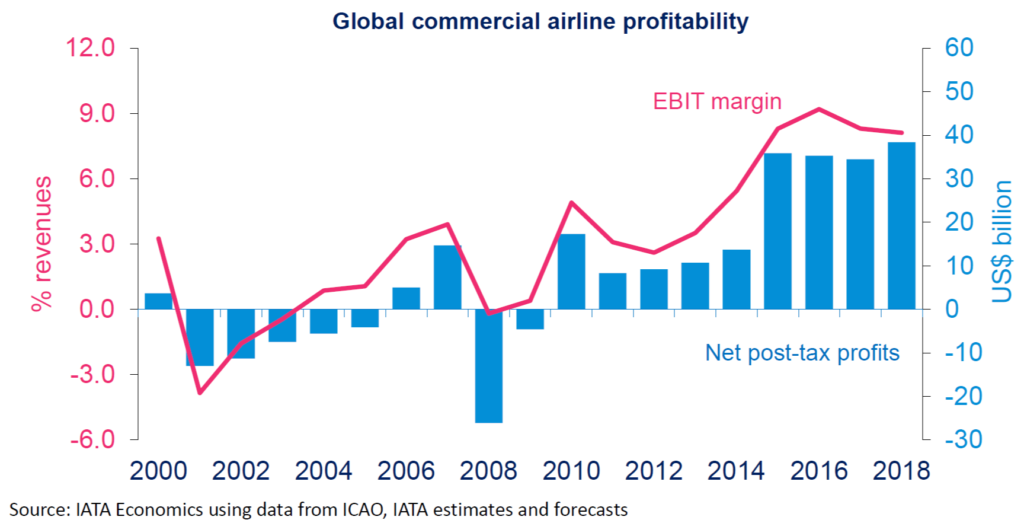 Investing in the Airline industry is also one of the supporting reasons for the current growth so let’s take a look at the NYSE Arca Airline Index “XAL”: It’s a modified equal- dollar weighted index designed to measure the performance of highly capitalized and liquid international airline companies. The Index tracks the price performance of selected local market stocks or ADRs of major U.S. and overseas airlines.

The index only yielded 5% in 2017 despite a great performance over Airline stocks so let’s take a look at the technical picture of the index using Elliott Wave Theory : 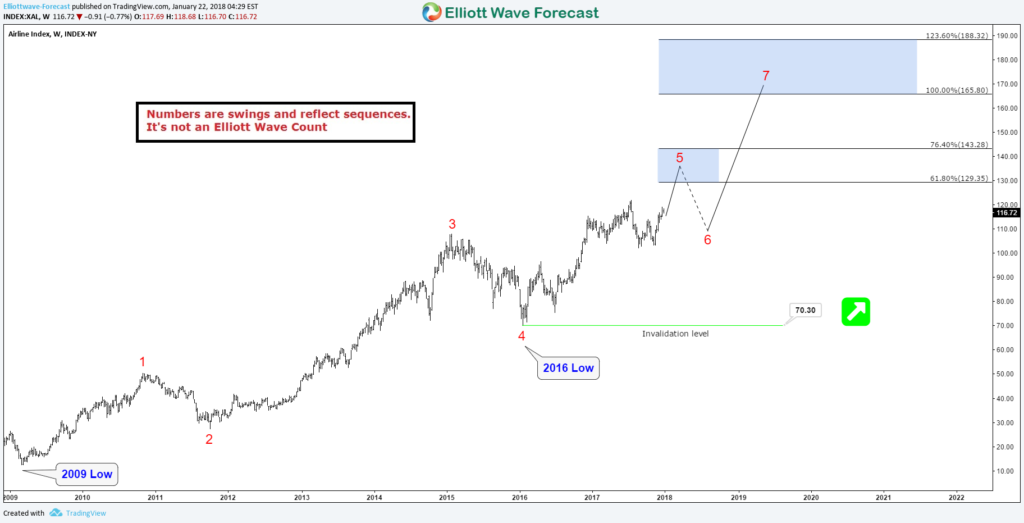 Since 2009 major low, the index rallied higher showing a 5 swings structure ( it’s not the same with 5 waves impulse ) which is considered as an incomplete bullish sequence suggesting more upside to come targeting the equal legs area 165 – 188. So technically, as long as XAL remain above 2016 low ( 70.30 ) then it should remain supported and find buyers during corrective pullbacks. 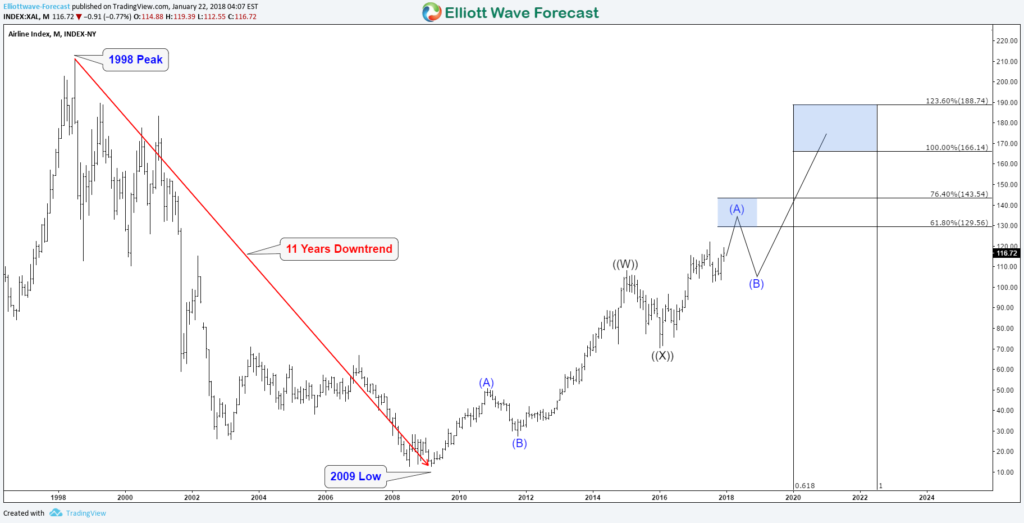 Markets can be trending higher or lower in series of 3 wave moves rather than the classical 5 waves structure. XAL Ended an 11 years downtrend in 2009 and up from there it started a new cycle higher which is expected to be unfolding as 7 swings double three structure. So like the rest of the stock market, it’s sharing the current uptrend from 2016 low which is expected to end around the 61.8% fib ext level 129 – 143 followed by 3 waves pullback then resuming higher again toward 100% area 166.

Consequently, investors still have the opportunity to join the rally in airline industry as long as the trend is intact. A live example is Warren Buffet, which joined the rally in 20016 as his company Berkshire Hathaway purchased millions of shares of American Airlines (AAL), Delta Air (DAL) and United Airlines (UAL).

There is still other available options for example choosing stocks with better performance like Boeing (BA) & Airbus (AIR) or you can be looking to buy one of the Etfs which cover the airline sector like XTN , IYT, JETS.

The Airline Sector saw an important advance in the recent 10 years as the demand keeps growing and companies keeps improving. Even the technical analysis for airline index is supporting more gains and profits in the coming years which will attract more investors into the sector.

If you want to learn to trade the new Elliott Wave Theory using our system then take this opportunity and try our services 14 days. You’ll learn how to trade Stocks and ETFs using our blue boxes and the 3, 7 or 11 swings sequence. You’ll also get access to our 78 instruments updated in 4 different time frames, Live Trading & Analysis Session done by our Expert Analysts every day, 24-hour chat room support and much more.