The latest trade war between U.S. and China may affect U.S. companies with big operations in China, such as Apple. Saturday’s report by The Wall Street Journal suggests that President Trump has given a go ahead to his aides to implement a fresh $200 billion tariffs ahead of scheduled trade talks with China. This can happen as soon as Monday this week. The latest tariff will cover a range of consumer goods. However, it will be set a lower limit at 10%, which is below an original figure of 25%.

The lower tariff serves as two purposes. With the lower base, Trump can threaten to hike tariff again to force Beijing to negotiating table. Secondly, it can also help Republicans ahead of the midterm elections by making sure the tariff does not adversely affect US consumers’ spending ahead of the Christmas season. President Trump has already signaled that he will not back down on his threat. On Thursday, he tweeted:

In previous weeks, there was some optimism in the market as Treasury Secretary Steve Mnuchin initiated a restart of trade talks with China. However, the latest action by President Trump has endangered the initiative as China threatened to decline participation. Even though China can’t retaliate Trump’s new tariffs due to the trade imbalance, Wall Street Journal suggests China can restrict sales of components and materials to U.S manufacturer’s supply chain. This would potentially affect big U.S. multinational. Wall Street analysts have singled out Apple as especially vulnerable.

The argument stems from the fact that Apple generated 20% if the revenue from China, which is equal to $44.7 billion. Data from IDC shows that Apple shipped over 41 million iPhones to China in 2017 and it was the fifth largest player in the market. In addition, Apple runs 40 stores in China, and it operates App Store and Music services in China as well. In the supply chain, Apple relies on Taiwanese firm Foxconn who assembles its iPhones.

Indeed Apple has finally expressed concern in its letter to the government on Sept 5. It said that the tariff can result in higher prices for its products as it covers a wide range of their products. Those products include Apple Watch and AirPods. Below is a chart with consumer products that Apple expects to be affected. 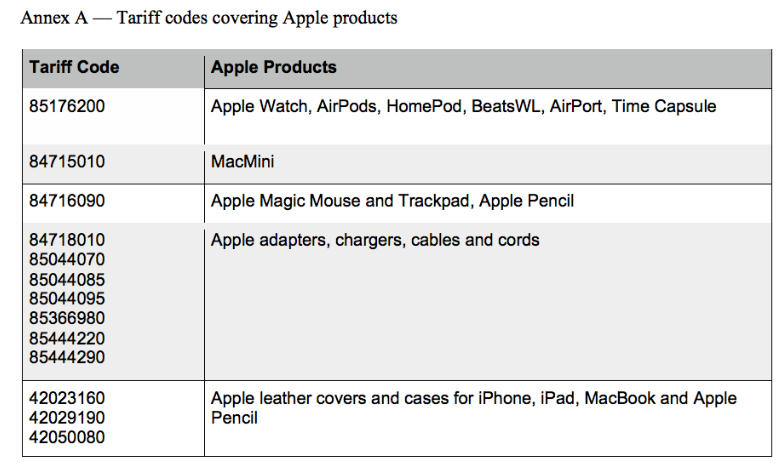 But how much adverse effect of the new tariff will there be on Apple? What does technical analysis and Elliott Wave say about the stock? Is it still a buy in the dips? Let’s take a look below: 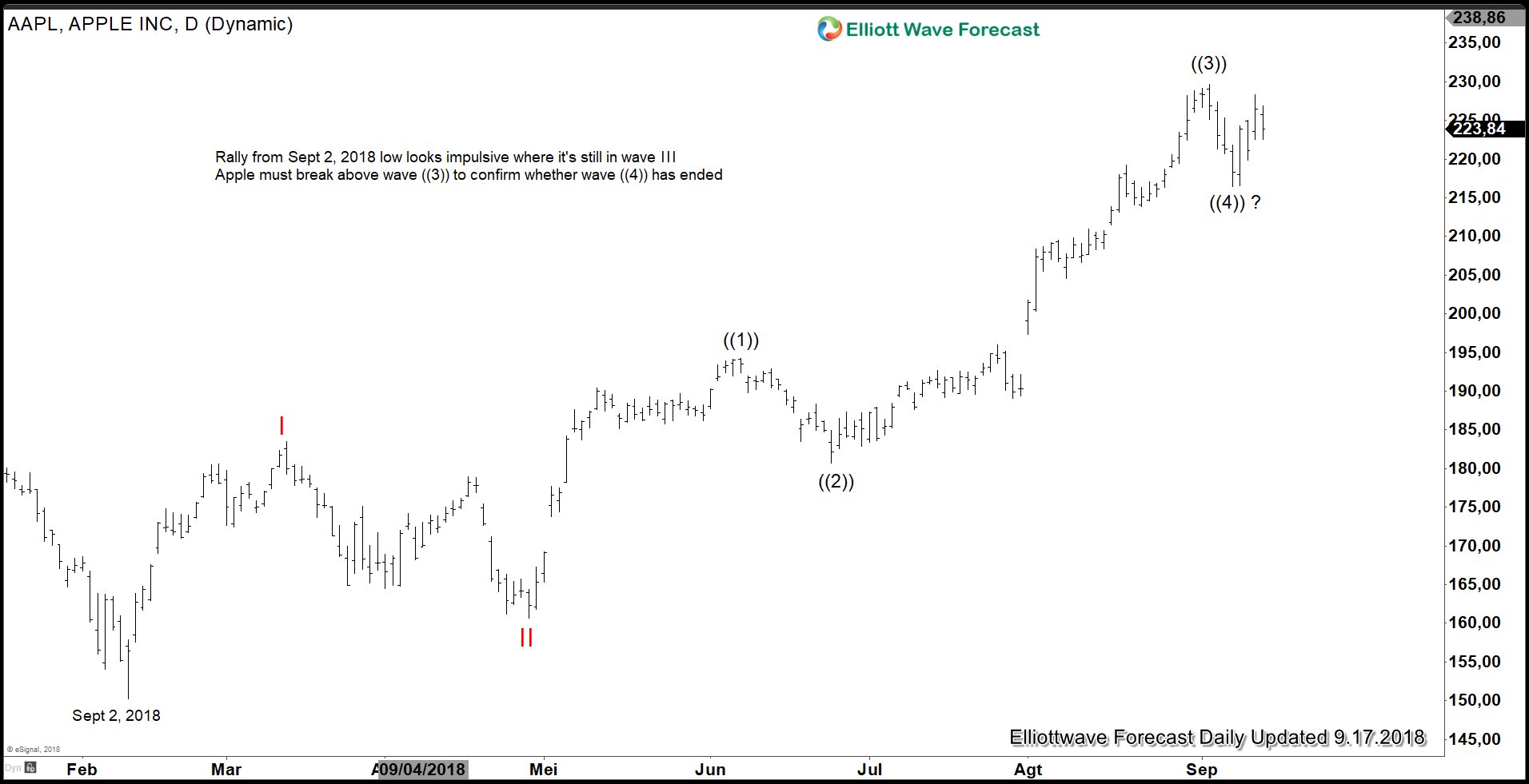 Apple’s rally from Sept 2018 low looks to be unfolding as a 5 waves impulse Elliott Wave Structure. If the proposed count above is correct, then wave III remains in progress and subdivided into 5 waves in smaller degrees. This suggests that another leg higher is expected to end wave ((5)) of III. The question is whether wave ((4)) has ended. If Apple breaks above wave ((3)) at $229.67, then wave ((4)) low is confirmed ended at $216.47. Otherwise, the stock still can do a double correction in wave ((4)).

Is it still a buy in the dips? We will take a look at shorter cycle 1 hour below 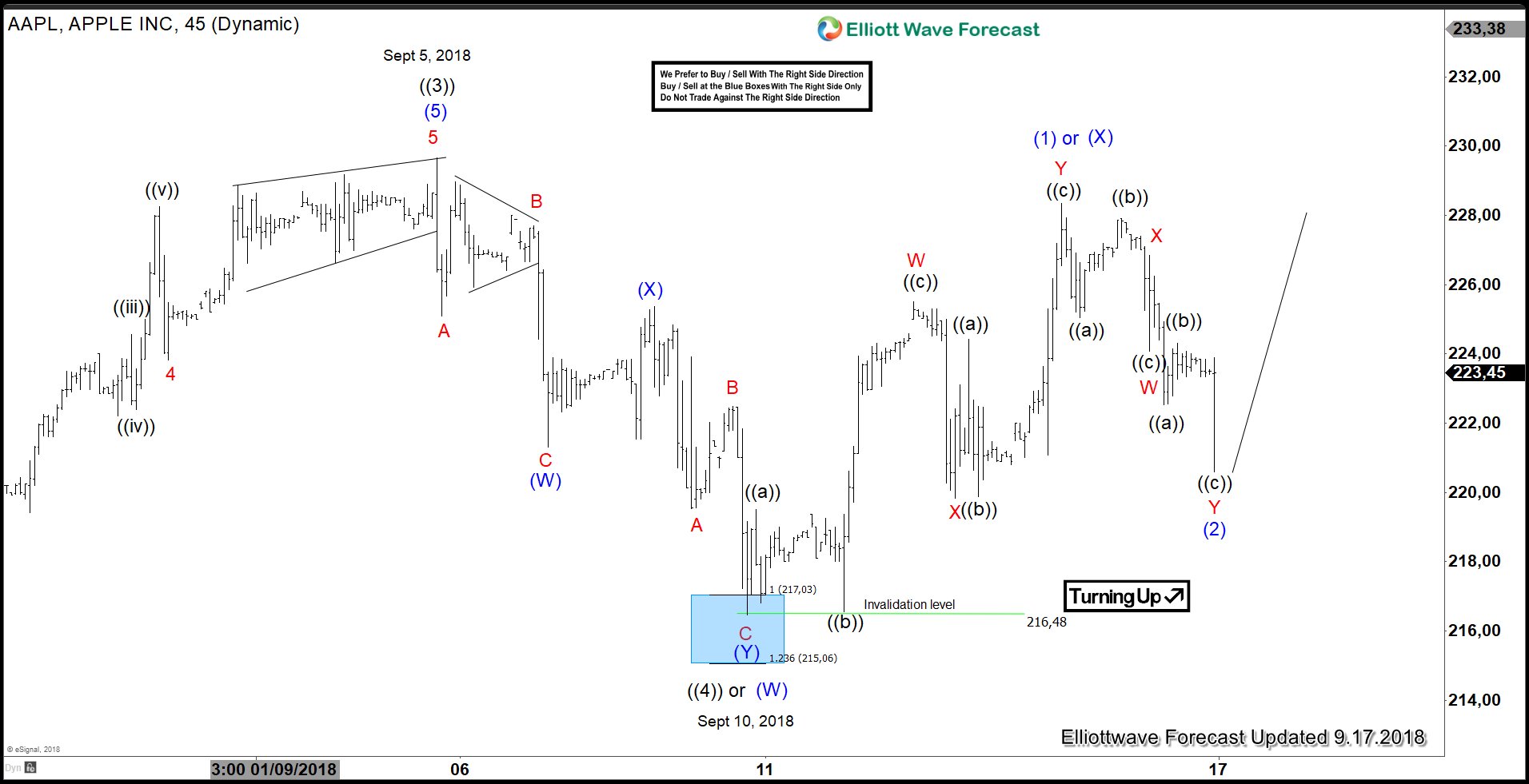 Apple hit all-time high on Sept 5 at $229.67. It’s very important to note that the pullback from Sept 5, 2018 to Sept 10, 2018 at $216.47 is unfolding as corrective structure. The pullback to be precise unfolded as double three Elliott Wave structure. It did not unfold as 5 waves impulse and thus Apple still remains bullish despite tariff or no tariff. The rally from Sept 10, 2018 low so far also unfolded in a corrective WXY structure, thus it leaves open the possibility of a double correction unless the stock breaks above wave ((3)). However, even in the case of a double correction where Apple breaks below Sept 10, 2018 low at 216.48, the stock will remain a buy in the dips as the first leg of correction from Sept 5, 2018 high to Sept 10, 2018 low is corrective.

Join our Live Session to find the buying areas for Apple and strategy to trade it as well as other stocks, forex, and commodities. New members can try our 14 days FREE Trial  without further commitment. We cover 78 instrument (Forex, Stocks, Commodities) using Elliott Wave forecasting technique in 4 time frames.