FTSE the index from UK, is correcting the larger degree cycle from February 2016 lows. While FTSE Elliott Wave Short-term price action suggests that the rally to February 27 high (7333.50) ended primary wave ((B)) bounce. Below from there, the decline is unfolding as a 5 waves Elliott Wave Impulse Sequence within primary ((C)) leg lower. Where each leg lower has an internal distribution of 5 waves structure thus favored being an impulse, which can be seen in the Chart below. Also, it’s important to note that the 1-hour Chart below is showing bearish sequence tag, which represents the incomplete sequence to the downside from January 2018 peak.

Within the Shorter cycles, the index so far is showing a Minor wave 2 bounce in single swing structure which is labeled as Zigzag structure. Then while staying above 6866.75 today’s low the index is expected to see another push higher approximately towards 7106.50-716357 .618-0.764% Fibonacci extension area of a cycle from March 13 peak before it resumes the decline. We don’t like buying the index and prefer selling the Minor wave 2 bounce in 3, 7 or 11 swings. 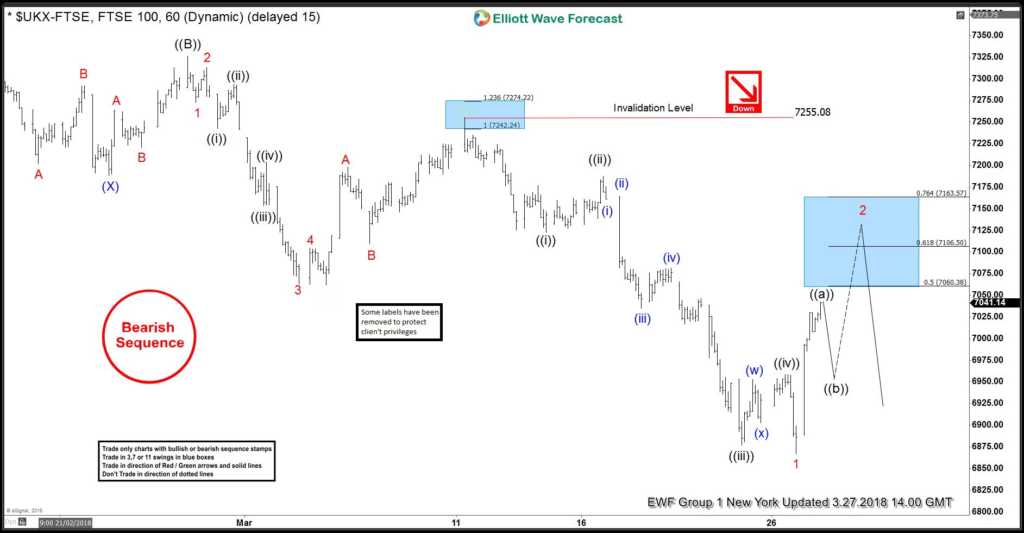 Keep in mind that the market is dynamic and the FTSE Elliott Wave view could change in the meantime. Success in trading requires proper risk and money management as well as an understanding of Elliott Wave theory, cycle analysis, and correlation. We have developed a very good trading strategy that defines the entry.

Stop loss and take profit levels with high accuracy and allows you to take a risk-free position, shortly after taking it by protecting your wallet. If you want to learn all about it and become a professional trader then trade our Blue Boxes with a special deal. Click here => To get 30% discount on all monthly plans in our spring break sale.