First Solar relies almost entirely on utility-scale projects which accounts for over half of the U.S. solar market and can be affected by the potential solar import tariffs by the Trump administration. However, preparation were already made to avoid such a step-back and the company booked 4.5 GW of panel and system sales in the previous quarter, more than it makes in a year.

After last month’s better than expected earnings report and the fact that utilities and project developers are booking tariff-free panels to lock up supply in 2018 helped First Solar shares to jump over 20% and the technical picture for its stock is looking for more gains in the coming months. 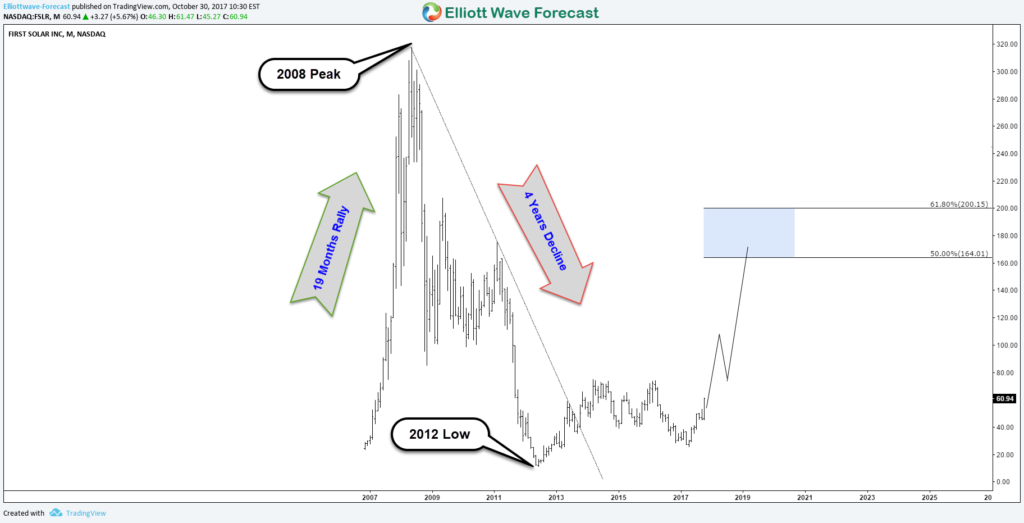 First Solar saw an impressive 1100% rally in the first 19 months after its IPO ($20) before it started declining from 2008 peak ($317) like the rest of the stock market around that period. The 3 swings decline lasted 4 years and erased all the gains saw previously until the stock found a bottom in May 2012 at $11.43. Up from there, FSLR bounced higher either to start new bullish cycle to the upside or at least to correct the decline toward the 50% – 61.8% Fibonnacie retracement area $164 – $200. 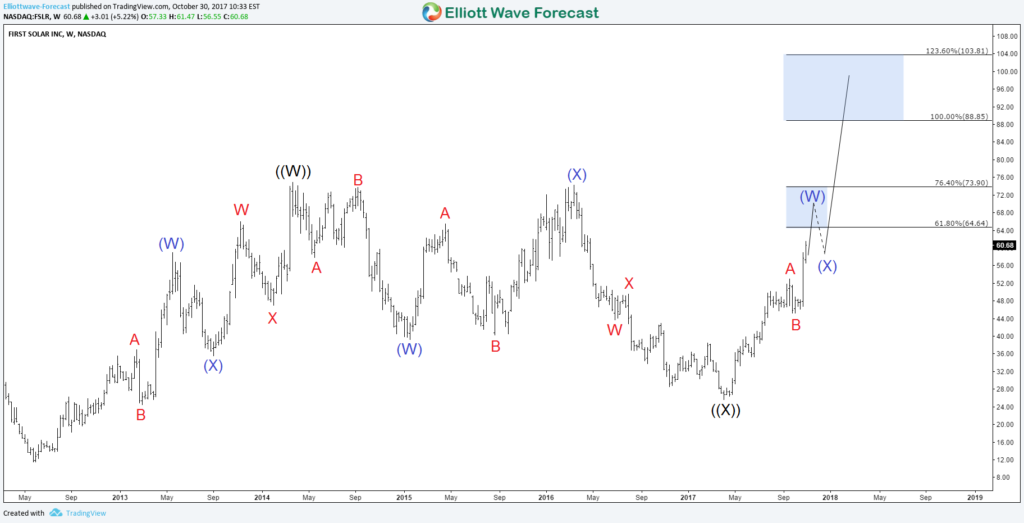 Up from May 2012 low, FSLR rallied in a corrective 7 swing sequence which indicates the stock is still in a correction stage then it did another double three to the downside which ended on April of this year. Afterward, the stock started another rally which still needs to break above 2014 peak to target equal legs area $88 – $103 as a first step of a larger move.

In the short term, FSLR is looking to reach $69.1 – 72.5 area where a 3 waves pullback can take place before it can resume the move higher, consequently the stock should remain supported  while holding above 45.26 low.

First Solar booked most of its production for the next two years, which gives it a tremendous amount of certainty and could present a good investment. Technically the stock is still recovering from the fall since 2008 peak but will it be a fast recovery or a slow sideways bounce? Only time will tell but the overall picture remain in favor of the Solor Energy sector and companies like First Solar or SunPower (NASDAQ:SPWR)  are have more potential in the future.

If you’re interested in getting more insights about the Energy Sector then take this opportunity and try our services 14 days  for Free to learn how to trade Stocks and ETFs using our blue boxes and the 3, 7 or 11 swings sequence. You will get access to our 26 instruments updated in 4 different time frames, Live Trading & Analysis Session done by our Expert Analysts every day, 24-hour chat room support and much more.