Firstly as seen on the monthly chart below there is data back to the early 1970’s readily available in the pair. It obviously had a central bank intervention during the month of October 1974 where price topped out at 6.3387. Most all Elliott Wave practitioners are geared to the notion that a trend will be in 5 waves and a correction against the trend will be in 3 waves back against the trend. That is generally true especially if counting the stock market indices however it is really hard and next to impossible to find long term forex charts like this that will show a clean 5 waves.

Secondly with the aforementioned thought in mind I will describe how I think the pair has declined thus far & what can be seen in the future. You can see the decline from October 1974 highs has a line drawn down to the October 1992 lows. That can be counted in Elliott wave a couple of best ways at a minimum. As usual there are usually a few counts that can be valid. This point at the October 1992 lows appears to be a double three. I prefer to use momentum indicators to show when a cycle ends from any point in time. Whenever a proposed wave two, B, X or wave four of any degree has been taken by the momentum indicator it is likely it has ended that cycle whether it is up or down.

From the October 1992 low the pair bounced hard to the April 2000 highs. This suggest it was correcting the cycle from the October 1974 high in a flat structure. The pair made another low since then in August 2011. Then in March 2020 it took out the August 2011 low.

The analysis concludes below the weekly chart. 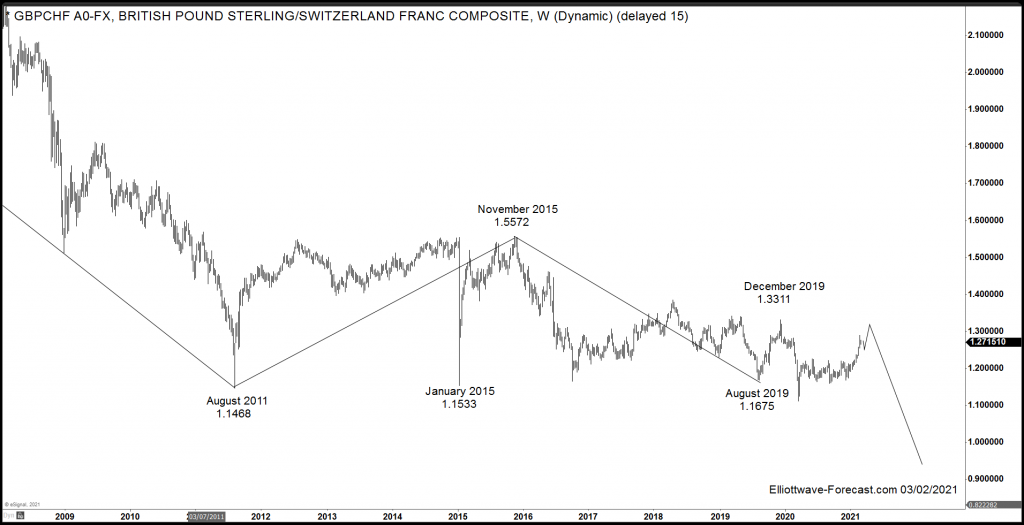 Thirdly and in conclusion. The bounce from the August 2011 low ended at the November 2015 highs in three swings again. The pair declined from there in 3 swings again to the March 2020 lows. The bounce from there remains strong enough to suggest alternately it can correcting the cycle from the November 2015 highs. However while it remains below the 12/13/19 highs the pair can see new lows continue later.