There are three types of 3-3-5 flat corrections have been identified by differences in their overall shape and points where each will reach. Flats will occur in either a bullish or bearish trend and may be seen at any point during a wave cycle as well as in any degree of Elliott Wave trend. The common denominator in all three structures is there will be three swings with the first two being three wave moves followed by an impulse which may sometimes be a diagonal five waves however nonetheless will complete a 3-3-5 structure.

For illustrative purposes we have used the bullish examples however in a bearish market the same structure applies inversely.  In a regular flat correction, wave “(b)” terminates about at the level of the beginning of wave (a), and wave (c) terminates a slight bit past the end of wave (a). Many times a flat like this, wave (c) of ((b))  will end around the equal legs of (a) to 123.6% Fibonacci extension of (a).

A more common  variety called an irregular or expanded flat has a price extreme beyond that of the preceding ruling trend cycle peak . In expanded flats, after completion of the first swing against the trend in wave (a) , wave (b) of the 3-3-5 pattern terminates beyond the starting level of wave ((a)), and wave (c) of ((b)) ends more substantially beyond the ending level of  the initial wave (a) many times around the 123.6% to 161.8% Fibonacci extension of the initial wave (a).

The less common variation on the 3-3-5 flat pattern is called a running flat, wave (b) terminates well short of making a new price high against a ruling trend cycle peak or low in the (b) wave & price in the (c) of ((b)) will fail to reach the price extreme of the initial wave (a).

Thanks for looking, hope you enjoyed it. Feel free to come visit our website and take a trial subscription. 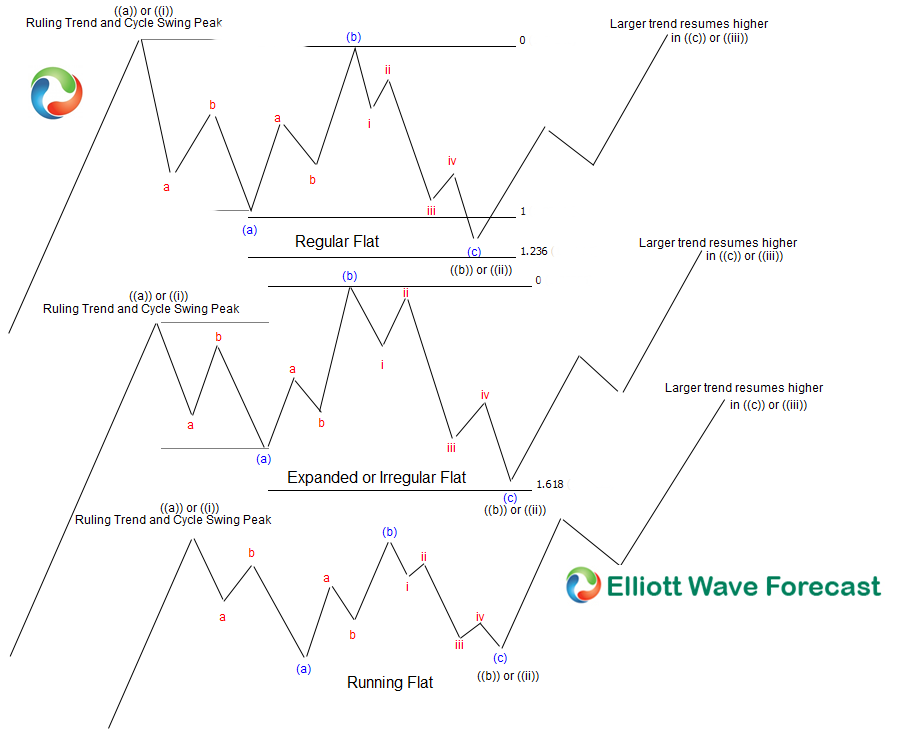