In this video today, we will analyze US Dollar through USDPLN (Poland Zloty). Below you can find the short term and long term outlook in US Dollar

Video on US Dollar Elliottwave Analysis through USDPLN

At Elliottwave-Forecast.com, we use correlation as one tool to complement our forecast. We often use USDPLN as we believe it is good proxy for Dollar Index (DXY). In below’s chart, we overlay the two instrument, and we can clearly see they are nearly identical 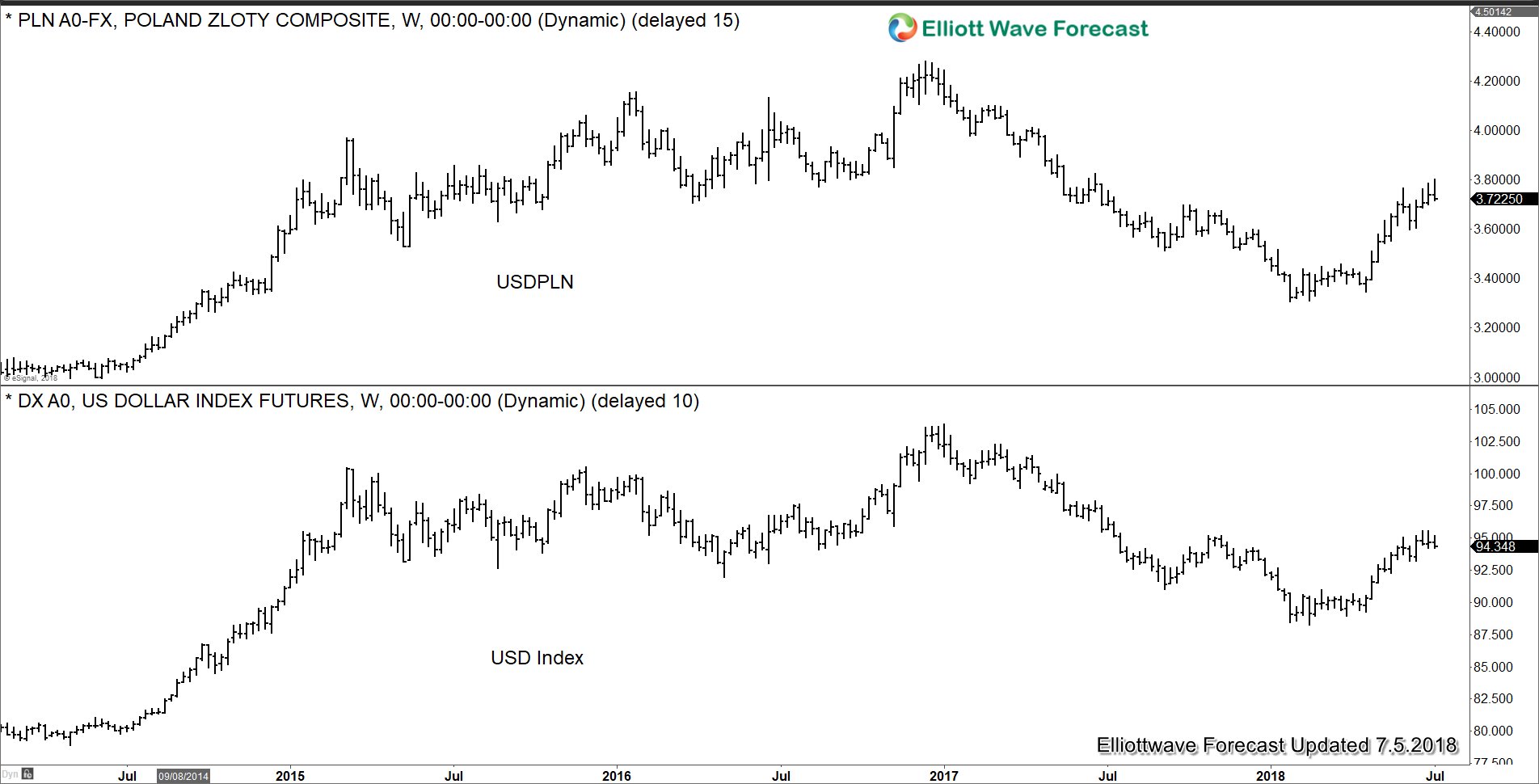 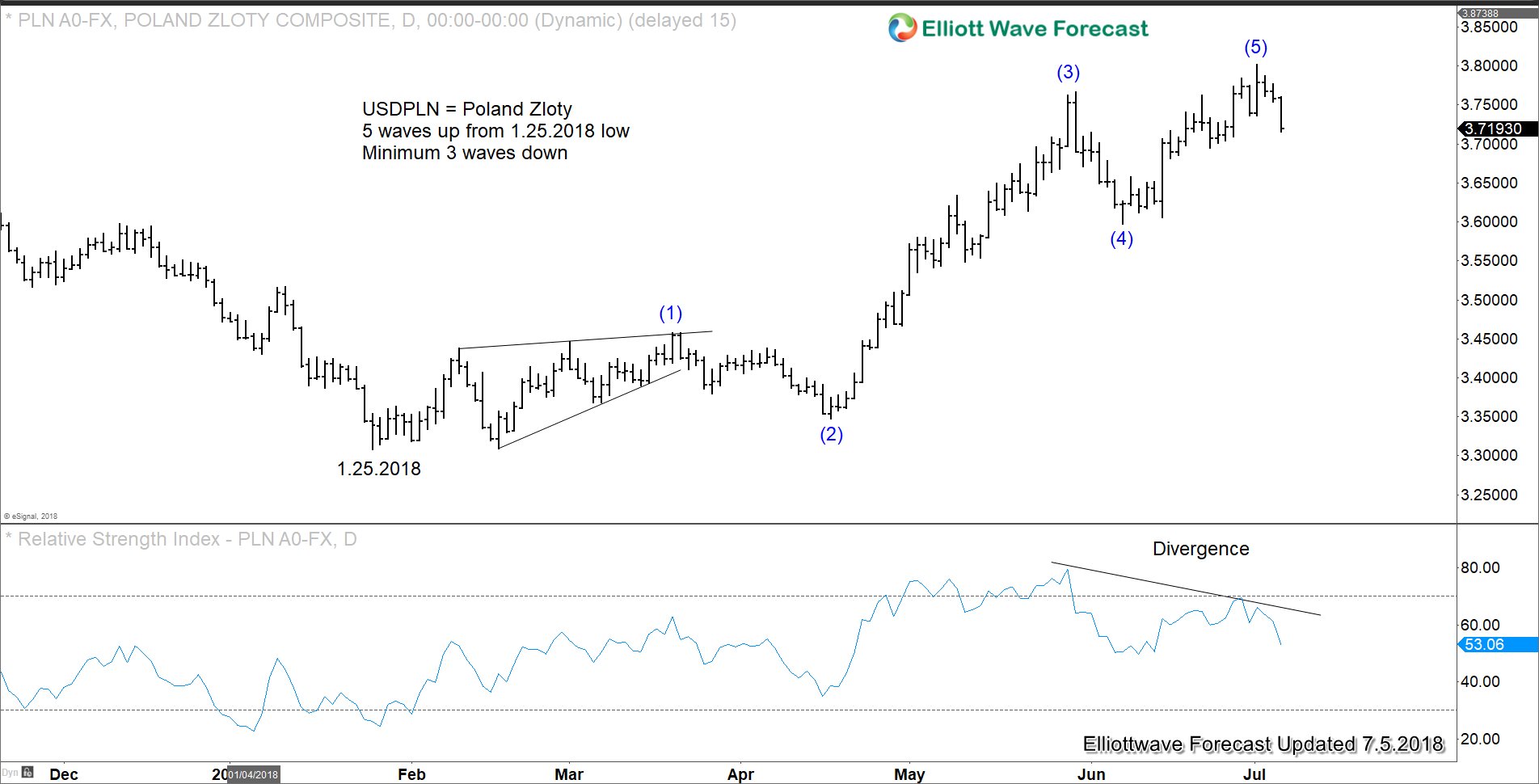 USDPLN shows a clear 5 waves impulse Elliott Wave structure from 1.25.2018 low, and there’s also a momentum divergence at the end of wave 5. The current reaction lower in the pair suggests it has likely ended wave (5). Therefore, at minimum, pair should see a 3 waves reaction lower to correct the rally from 1.25.2018 low (3.3075). Due to the positive correlation with Dollar Index, we could say that in the short term, we can see USD weakness in 3 waves at least. 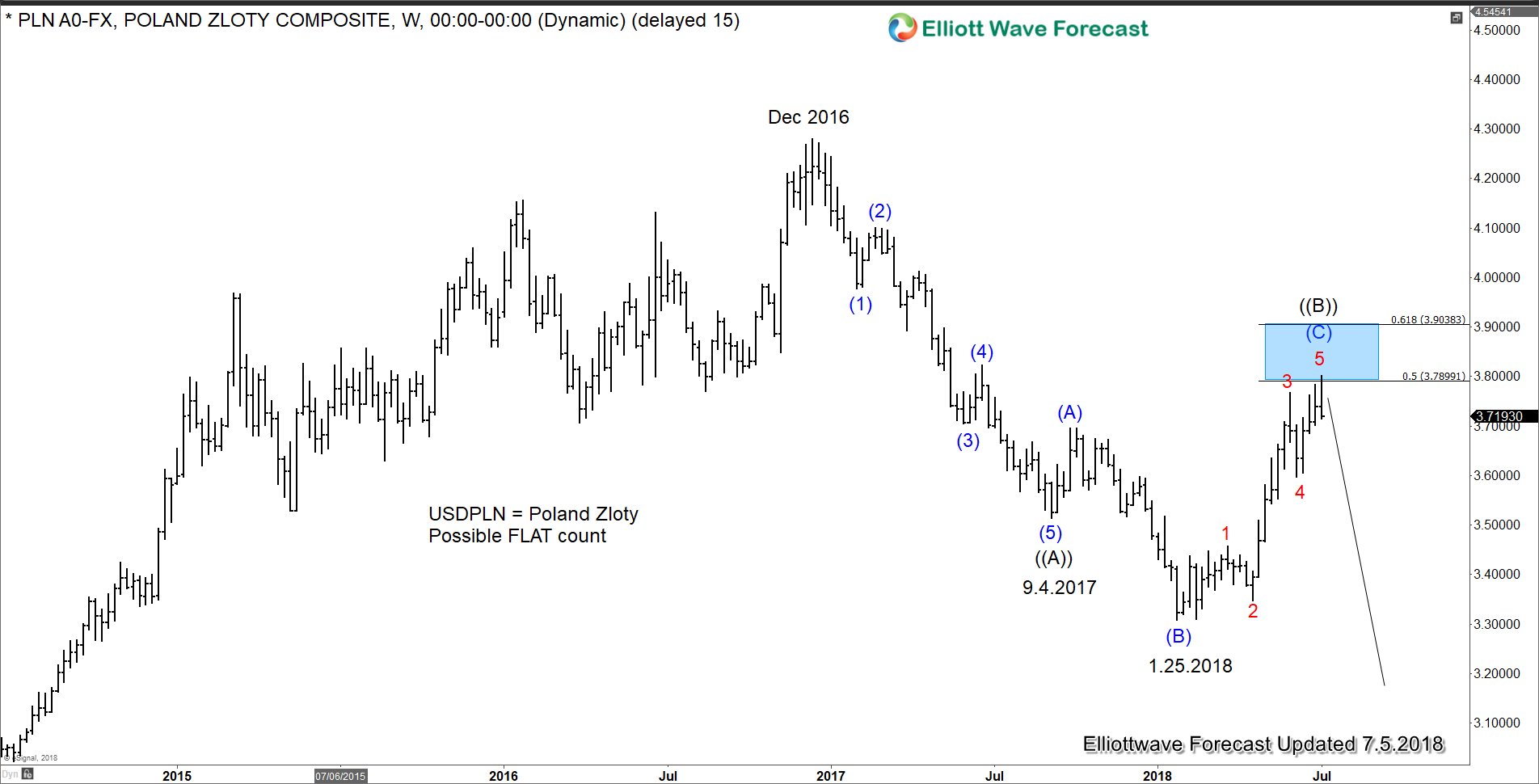 In Scenario #1 (Bearish view) above, the 5 waves rally from 1.25.2018 low is part of wave (C) of FLAT which starts from 9.4.2017 low. Thus, the decline from Dec 2016 peak to 9.4.2017 low ended wave ((A)) as 5 waves impulse Elliott Wave structure. Then wave ((B)) correction is unfolding as an expanded FLAT Elliott Wave structure. In this count, USDPLN is ready to extend lower and will eventually break below 1.25.2018 low. As it has a positive correlation with Dollar Index, then we can see Dollar Index resuming the weakness to new low. 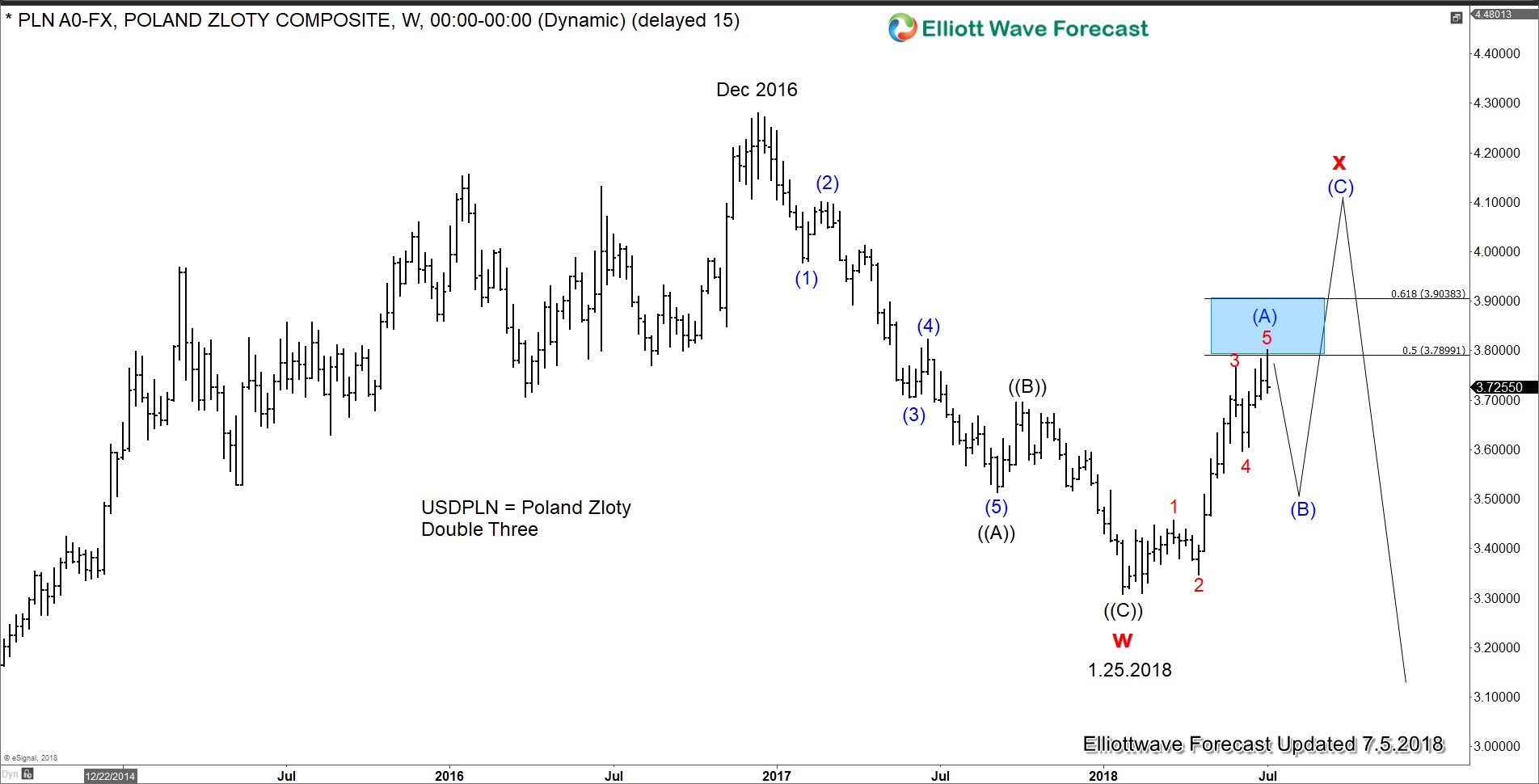 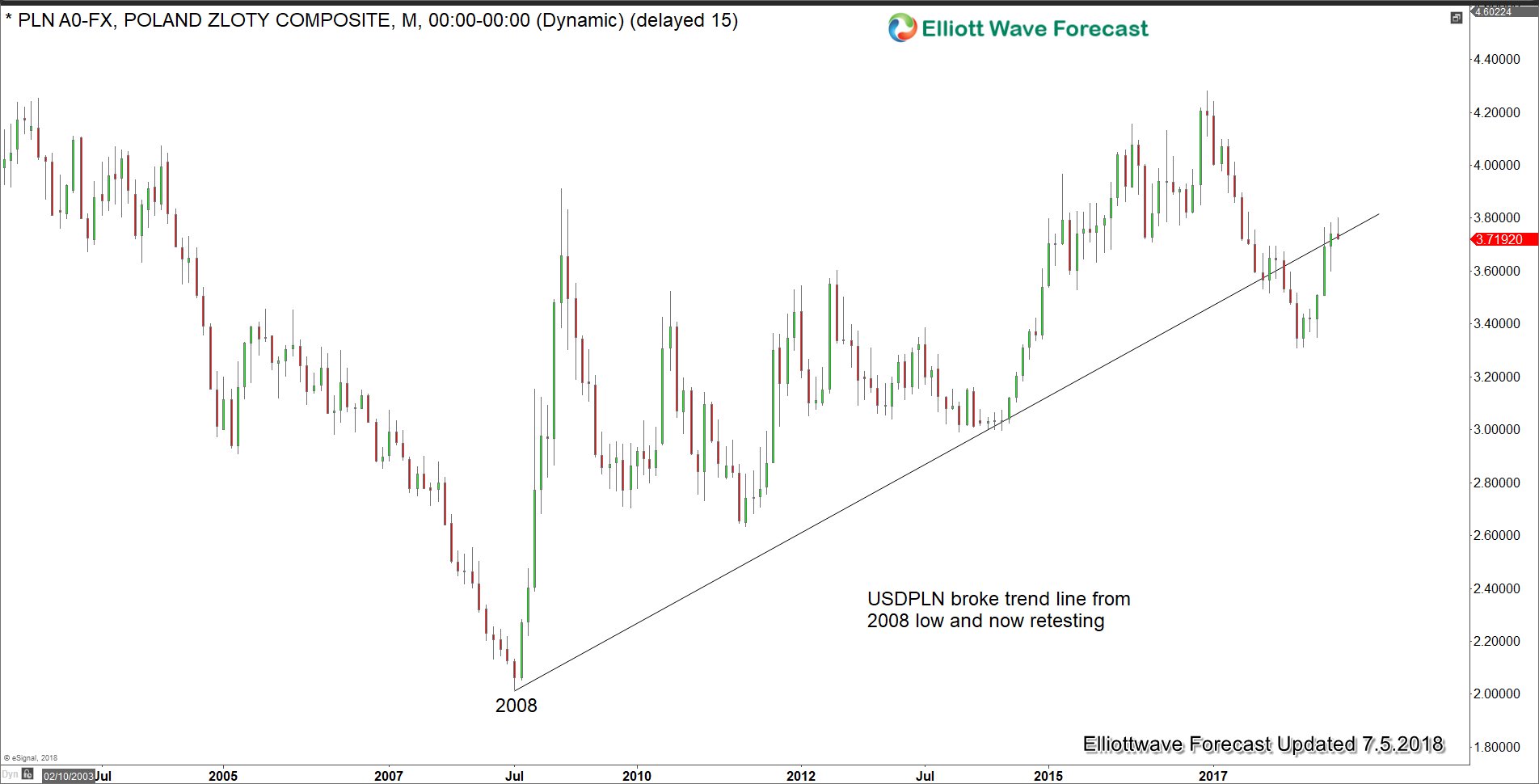 It’s worth to mention that USDPLN broke trend line from 2008 low last year. The pair has since recovered and currently sitting at the same broken trend line retesting it. If the break is valid, then ideally the pair doesn’t close above the broken trend line and should continue to extend lower at least 1 more leg.

We do this type of analysis everyday in Live Session and Live Trading Room. If you’d like to know more, you can take our 14 days FREE trial.