The most widely recognized market move among participants is the powerful wave three. The following is what to look for after completion of the third wave impulse. In any degree of trend either in a bullish or bearish Elliott Wave cycle,  a wave four consolidation following a third wave will usually show a three , seven or 11 swing Fibonacci  retracement between 23.6% and 38.2% of the preceding Elliott wave three measured from the wave two correction lows to the peak of the wave three. The exception to the 3, 7 or 11 swings to look for is a triangle which of course will be 5 swings of smaller degree 3 swing moves. An ideal correction of three swings will usually show the third swing ending around equal legs to a 1.236%  Fibonacci extension of the first swing and end in the aforementioned 23.6% and 38.2% Fibonacci retracement area before continuation of the cycle & trend into the fifth wave.

One guideline we here at ElliottWave-Forecast differ from the original 1930’s version of Elliott Wave Theory is in the original theory,  a wave four retracement is acceptable to be labeled as a wave four as long as it remains out of the price area of the wave one in a conventional impulse. In our improved version of Elliott Wave Theory, if we see price has retraced 50% of the wave three then the wave four being expected is not any longer a valid count as there will be a better option for a count. The only exception to this guideline we use in our system is a lead or ending diagonal impulse wave four may or not  have overlap with the price territory of the wave one and is routinely seen in past Elliott Wave structures to have 50% to 61.8% Fibonacci  retracements of the preceding wave three. Feel free to refer to the graphic below which is drawn in a bullish cycle trend , a bearish cycle of course uses the same guidelines in reverse. Again , after the Elliott Wave  four correction completes look for continuation of the larger cycle impulse in the wave five. Refer to the title “How to get an Elliott Wave fifth wave target”  here  as what target areas to look for in the final wave of an impulse. 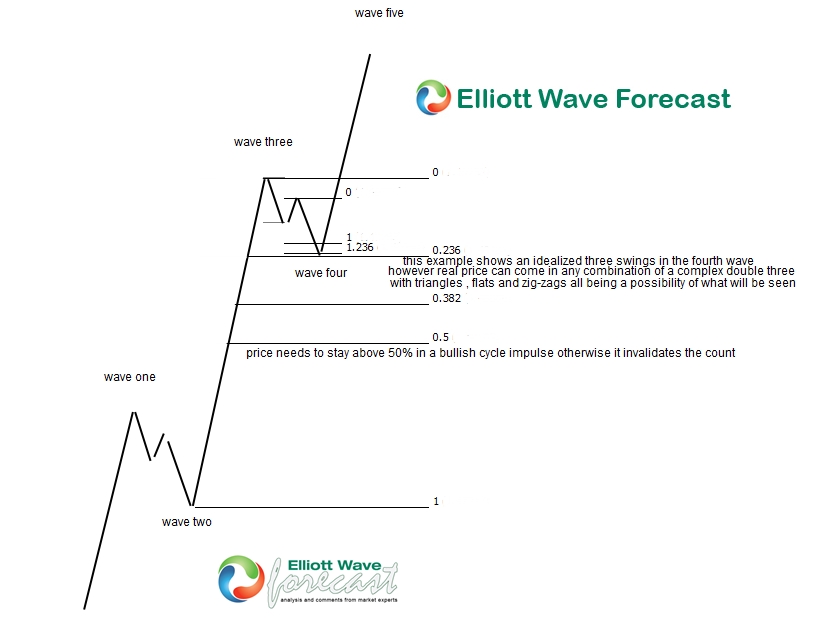