Are the World Indexes close to a huge peak?

Since the correction between the year 2000 and 2009, many traders around the world have developed an idea of bearish World Indexes with more downside to come. With Fed driving Market, everyone is under the idea that Global Indexes are inflated and will crash again resulting in another decline like the one seen in 2008. Traders, first of all, need to understand that the Market does not move in a straight line, it has never moved in a straight line and never will, consequently correction in different degrees always will take place. It is understandable that the biggest correction we have seen so far was the one that happened between 2000-2009 and someday a correction even bigger that that will happen. It is important to understand that corrections are needed, otherwise there would be no losers and no profit takers. We at Elliottwave–Forecast.com believe that the Indexes trend will always be Bullish in the Century and Yearly time frames and will do corrections in weekly, monthly and even yearly degree at one stage. We follow all Indexes around the World and apply a system in which we ride the trend is over and market said correction has started and then, we locate the degree and we adjust the counts according to the degrees. We use Elliott wave Theory to count the waves and gather directions, also to explain our ideas to members and followers, but we use several other tools like correlations, sequences, cycles, time and distribution to increase accuracy of our forecasts.

In 2015, we knew it was time for a correction in Daily Time frame and we warned members and followers about it. Read this blog $NIFTY reaching a Warning area for Indexes Bulls  and see how the $NIFTY from India was the one that called the extreme in time and price and we knew that was the time for the World Indexes to make a daily correction and pull back in 3 swings at least or extend into 7 or 11 swings. However, at that moment, we also knew that the dip was another chance to buy into the all-time 100% in most World Indexes. Now the World Indexes are not yet at risk of another major peak and any dips should still be considered another chance to buy in 3, 7 or 11 swings.

FTSE Swing sequence from the All Time Low 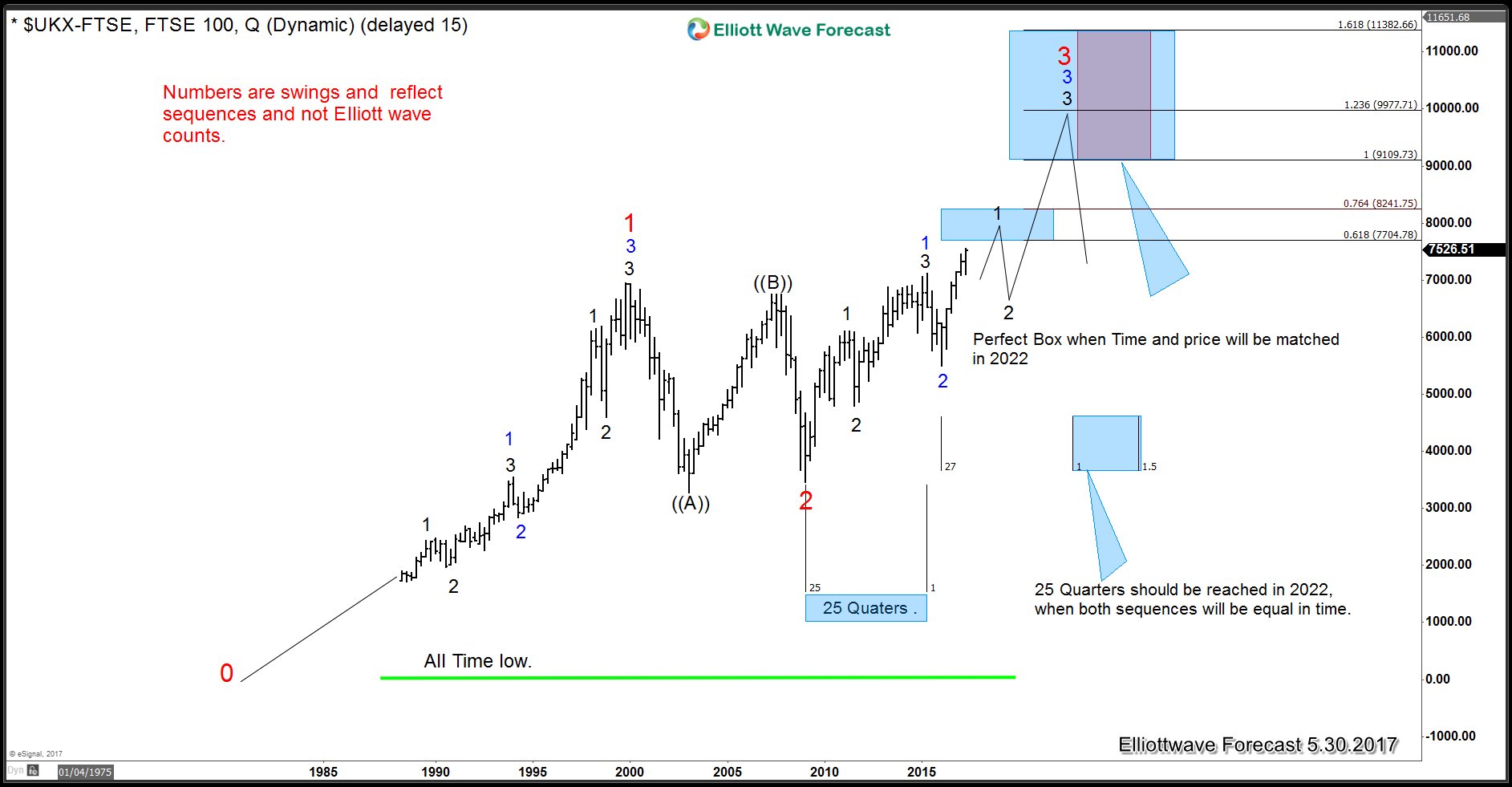 Since the all-time low and following the sequences in 3 different degrees Black/ BLUE /RED, it is clear that Price has not yet reached the 100% Fibonacci extension area between 9109-10000 area and neither time has matched the 1=3 in RED degree, nor 1 Blue = 3 Blue within RED 3. the idea is that soon, market will pull back in 2 BLACK within 3 Blue but still both price and time are calling for stronger Indexes into the years 2022-25 and that’s when there would be a chance of a nice correction either to correct the cycle from 2009 low i.e. 3 RED or the whole cycle since 0 RED. By then, we will get a perfect hit of 3-3-3 and the Index should be ready for at least a Weekly correction. As we mentioned earlier, a big Illusion has been created that a huge Crash needs to happen in the World Indexes but the Reality is that someday a big correction will happen, but picking tops against a clear Bullish trend it is not the right trade. In 2022 the time will be equal from 2009-2015 and  2016 to 2022 which will be equal cycles of 6 years and also if price has reached the 1=3 RED and then 1=3 in BLUE, there will be chance of weekly correction to take place in the World Indexes, until then our strategy remains to buy the dips in 3, 7 or 11 swings and not pick the tops.