The last time I looked at Workhorse was in August 2020, I was still expecting some further upside to take place.  And after that, I was looking for a pullback correcting the whole cycle from the all time low.  You can view this article here.

Lets take a look at the company profile:

“Workhorse Custom Chassis, LLC was founded in 1998 by investors who took over the production of General Motors’ P30/P32 series stepvan and motorhome chassis. By 2005, they were taken over by Navistar International, which had been selling them diesel engines.  Navistar then shuttered the plant in 2012 to cut costs after having suffered heavy losses.

In March 2013, AMP Electric Vehicles took over Workhorse Custom Chassis, LLC’s assets and began offering a range of electric vehicles. In 2015, AMP changed its company name to Workhorse Group Incorporated. On January 4, 2016, the Company was approved by Nasdaq Capital Market and its common stock started being quoted on Nasdaq under the symbol “WKHS” (NASDAQ: WKHS).

In February 2019, Steve Burns, co-founder of AMP Electric Vehicles and CEO of Workhorse decided to resign from the company. President and COO Duane Hughes became the new CEO of Workhorse.

In November 2021 it was reported that Workhorse faced a Department of Justice investigation as well as a SEC investigation that was first reported in a September 2021 report by shortselling research firm Fuzzy Panda who accused the company of fraud which was followed up by a Cincinnati Enquirer report which found that top Workhorse executives and board members sold off $60 million worth of stock and that part of the selling occurred following interactions with postal officials which signaled their USPS bid was in trouble.

The report also stated that Workhorse was being sued by some shareholders in the company, which accuses them orchestrating its USPS as part of an insider trading scheme. On November 9, 2021, Workhorse confirmed it’s SEC and Department of Justice investigations in a regulatory filling which stated that the investigations were related to the trade of securities in the company leading up to the award of the USPS contract to Oshkosh.”

As you can see, the company faced some troubles in November 2021.  Well what do the technicals say about the outlook?  Lets take a look. 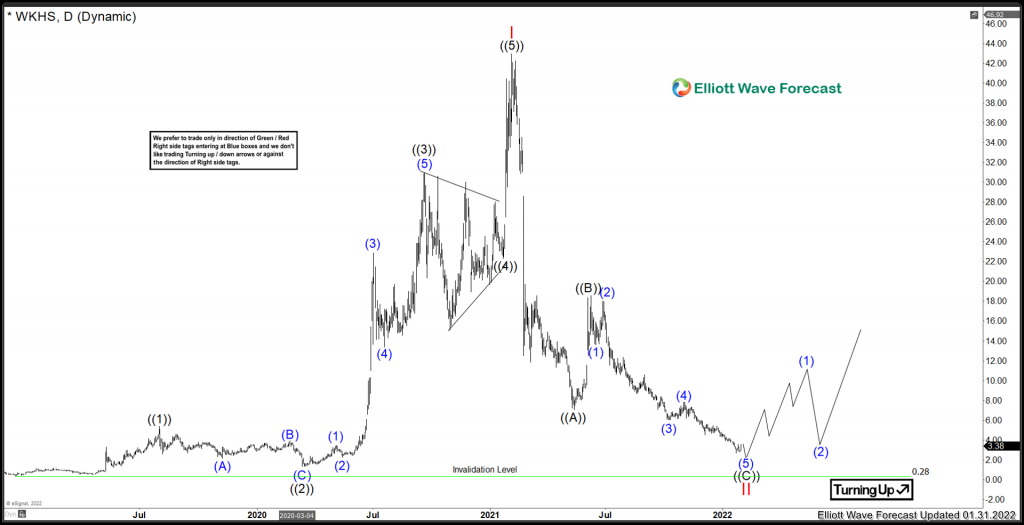 The all time low for Workhorse came in late 2018 at the 28 cents low.  After that, a new cycle higher has been established.  This cycle has momentum divergence at the Feb 2021 peak to give evidence that an impulse from the 2018 low has taken place.  From that Red I peak set Feb 4/2021 @ 42.96, the stock has experienced a very deep correction.  It has been a very technical correction so far.  ((A)) and ((B)) have clear technicals to support that swing as the connector. From the ((B)) peak, Workhorse is now in another impulse lower for ((C)) of Red II.  The stock is probing deep levels of price.  Currently, at around the 3.00 level.  The all time low is at 28 cents, as long as prices remain above that low, it is favoured that this pullback is a wave II before resuming higher in a Wave III.

In conclusion, as one can deduct, this stock is very volatile.  It has already pulled back enough to almost erase the whole rally from the low.  Further downside can still take place before the next cycle higher resumes.  The equal leg blue box is not providing any good level due to the depth of the ((A)).  It is also well below the 61.8 retrace which comes in at 16.63. Momentum on the recent Jan 24 low was very strong.  And could be suggesting that the end of this correction could be close.