In this technical blog we are going to take a look at Fundamental & Technical point of view of US steel. The steel industry continues to face a challenging economic environment due to the economic slowdown in China, volatility in financial markets, slow growth in global trade, and low prices of oil and other commodities.

Although the automobile and construction sectors continue to support the demand, the world’s largest steelmaker, Arcelor Mittal along with United States Steel Corp and AK Steel Holding Corp reported losses during the first quarter due to lower average steel selling prices. High levels of imports and lower drilling activities by energy companies continued to put pressure on pricing and shipments.

In the first quarter of 2016, as per the World Steel Association, global steel production decreased 3.6% to 386 metric tons (Mt) as production shrank across all regions. China, the world’s largest steel maker, again disappointed with a 3.2% decline. Thus economic slowdown in China has dealt a massive blow to the global steel industry. Meanwhile, according to the World Steel Association’s short term outlook published in April, steel usage in China is expected to fall 4% in 2016. 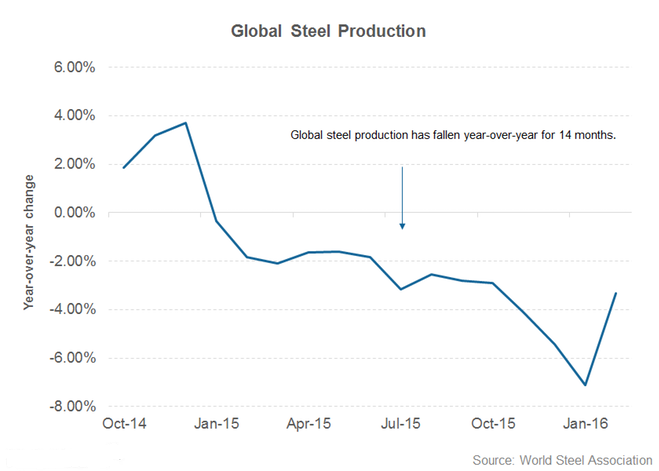 Now let’s take a looks at some technical’s points at the charts:

The stock ended the cycle from 2014 peak on January 2016 lows (33.83). However, cycle from 2008 all time peak remains alive. As (AKS & US-Steel) has scope to see another leg higher against the January lows it has scope to follow the same & a break above the multi year channel line also provides higher chance of a more important low formed.

Conclusion: The steel industry has experienced a significant downturn due to the economic slowdown in China and low price in commodities. As a result, global steel productions have decreased significantly year over year. However, looking at the U.S. market, there are several factors to be optimistic about the future growth of US- steel makers as both fundamental & technical analysis are pointing to a steady growth. Other than the rebound in automotive and construction sectors which support steel demand, steel prices have recovered after the. U.S. started to impose anti-dumping duties on imported steel from China. The commerce department is also expected to issue its final rulings on imports of cold-rolled steel from Brazil, India, Korea, Russia and the UK on July 13. These actions are expected to assist the American steel makers defend their turf against illegally dumped steel products and boost the margins of steel companies.