The tax reform is perhaps the single most important agenda for Republicans. The consequence for falling short of the tax overhaul is dire. Should Republicans fail to deliver the tax reform, they could face rout in the mid-term elections next year. This means losing control of the Senate and possibly also the House of Representatives where they have a majority now. Recently, Treasury Secretary Steve Mnuchin has suggested that stock market could give back much of the gain if tax reform fails. Mnuchin said during a recent interview with Politico: “There is no question that the rally in the stock market has baked into it reasonably high expectations of us getting tax cuts and tax reform done”.  Given the high stake, the market seems to believe that some version of tax reform is likely to come out of Washington.

S&P 500 has gained in value more than $3.5 trillion since Trump’s election last November. Some suggest that it is due to the investors expectation that the Earnings Per Share of the S&P 500 companies would get a boost, and thus increasing the valuation. One major component in the tax reform proposal is a reduction in corporate tax rate. Trump proposed a reduction from the current effective tax rate of 25.4% to 15% while he was a presidential candidate, while House Speaker Paul Ryan proposed a reduction in corporate tax rate to 20%.

An estimate by Ned Davis Research suggests that a drop of corporate tax rate from the current effective tax rate of 25.4% to 20% will boost S&P 500 EPS (Earnings Per Share) by 7.2%, while an adjustment to 15% corporate tax rate would increase S&P 500 EPS by 13.9%.  The percentage increase in after-tax income is even greater for mid-cap and small-cap companies as the chart below shows:

Trump’s tax reform plans passed an important hurdle last week when the Senate approved a budget measure which allows the Republicans to deliver a tax-cut package without Democratic support. The Republicans still have yet to produce the tax reform bill as the end of the year approaches. At present, there’s still a lot of disagreement as to what cuts to make and how to pay for them. However, with the intense pressure to succeed on tax reform after they fail to repeal and replace Obamacare, there’s a good chance that some forms of tax reform will come out either this year or in the first half of next year.

Is Tax Reform the reason for American stock markets rally?

Some argue that the expectation of tax reform and higher EPS will cause American stock market to keep rallying. However, if this is the only reason, then only American market should keep rallying. The rest of the World Indices should not keep rallying as they have nothing to do with Trump’s Tax Reform. But is that really the case? An overlay of some major Indices from the West and East below (FTSE, S&P, Dow, DAX, Nikkei, and Hangseng) can give us further insight: 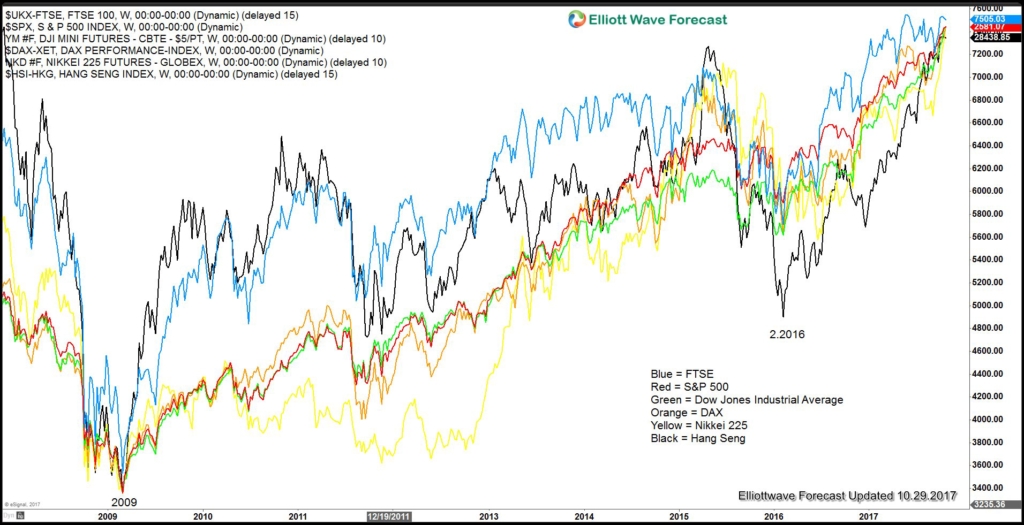 The six World Indices above represent various geographic regions and they look almost identical in their oscillation. They all have major low in 2009 and secondary low around February 2016. As of this writing, they all keep making a new high. Granted that not all of them make all-time historic high like S&P 500 or DJIA, but they all still keep rallying nonetheless. This simple analysis tells us that there’s more than just the argument that tax reform supports American stock market. We at Elliottwave-Forecast believe there is only one market and a high degree of correlation within the same group and also across asset groups.

As we suggested in our previous article on October 9th titled  “The World Index Has Much More Upside“, we argued that Hang Seng Index & FTSE show the clearest sequence in Indices group at this stage and they favor more upside. If the World Indices remain to move in the same cycle, then American Indices should also continue to be supported as Hang Seng and FTSE continue higher, whether we get significant Tax Reform or not. To get regular update on the market and Elliott wave charts in 4 time frames, try EWF 14 days FREE