Temperatures Soaring – Is it time for a Coca Cola drink? In today’s article, we will look at the difference between COKE and KO tickers and determine whether it’s the right time to consume Coca Cola (COKE) or should we leave it in the refrigerator for now and wait for it to become Ice cold? We will also see if Christiana Ronaldo really caused a $4bn hit to the company when he asked to remove Coca Cola bottles and preferred water during his press conference back on June 15.

For those wanting to invest or trade shares of Coca Cola company, it is important to understand the difference between the two tickers. The actual production of Coca-Cola’s well known brands is done by independent bottlers and distributors; commonly known as “bottlers”. To make things  confusing for anyone hoping to invest in Coca-Cola is that the bottlers stock name is nearly the same as the parent company.  For clarification, here are the companies with the appropriate stock tickers:

Coca-Cola Consolidated (COKE) is the largest independent bottler of Coca-Cola within the United States and has a market cap of 3.703B and 7.14M shares outstanding. Today, we will look at the long-term and mid-term Elliott Wave structure of COKE, the next blue box area where we can see buyers appearing and whether Ronaldo really caused a hit of $4bn to the parent company or the bottler.

Monthly chart shows data going back to 1975 or just before then. Rally from the all time low is unfolding as an Elliott Wave Impulse when wave (I) completed at $58.00, wave (II) completed at $15.00 while wave (III) completed at $413.39 and wave (IV) completed at $188.08 in March 2020. We have already seen a new all time high since then with price reaching $460 in June 2021. Expectations are that current pull back is wave ((4)) within cycle from March 2020 and should end with a new high above $460 after which we should expect a pull back in larger 3, 7 or 11 swings to correct cycle from March 2020 low at minimum. In terms of Elliott wave, we could be ending all of wave (V) and hence end cycle from all time lows but based in our correlation analysis, we doubt that would be the case and hence favoring the view of an extension within wave (V) or the more bullish path which is shown in the second chart. 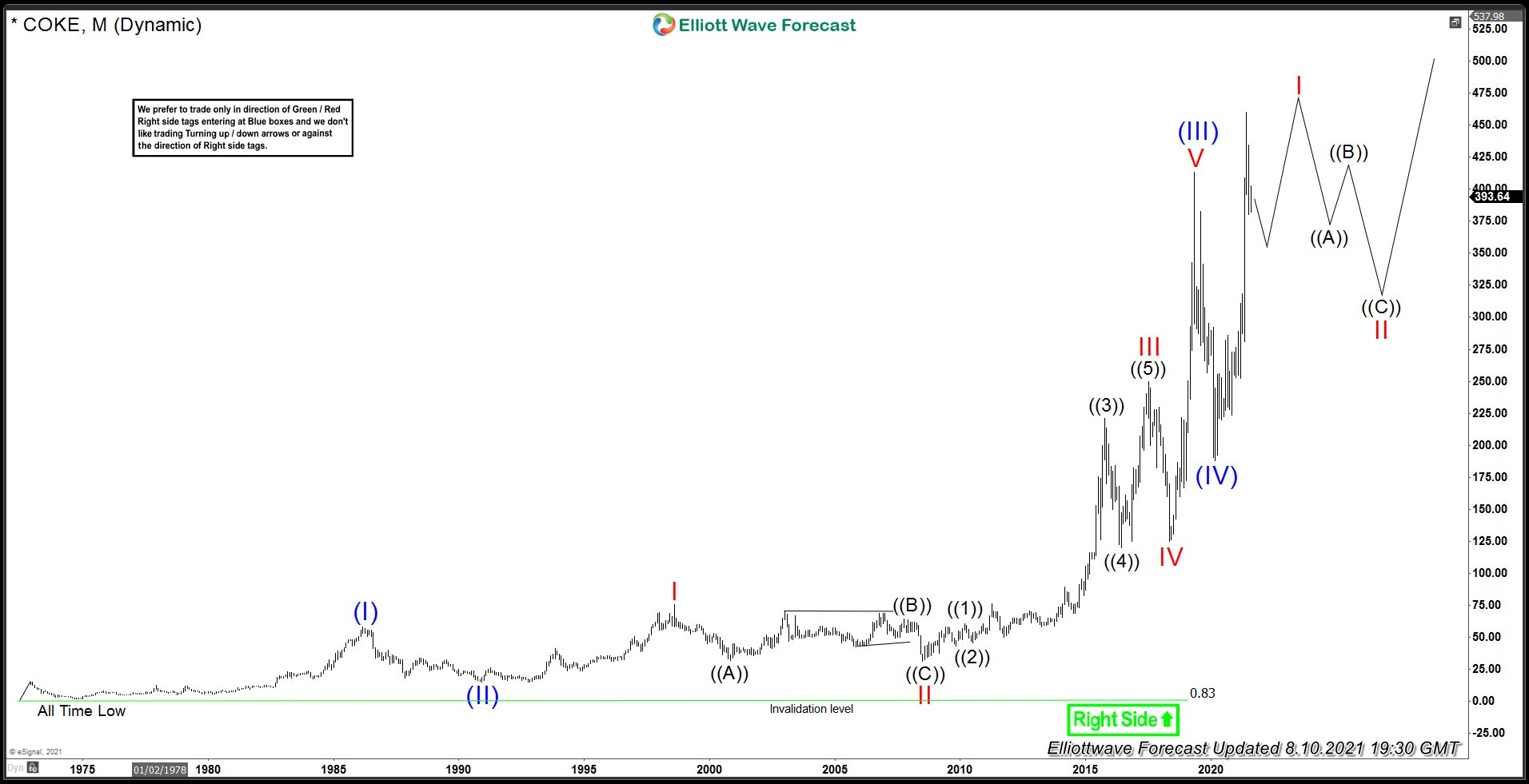 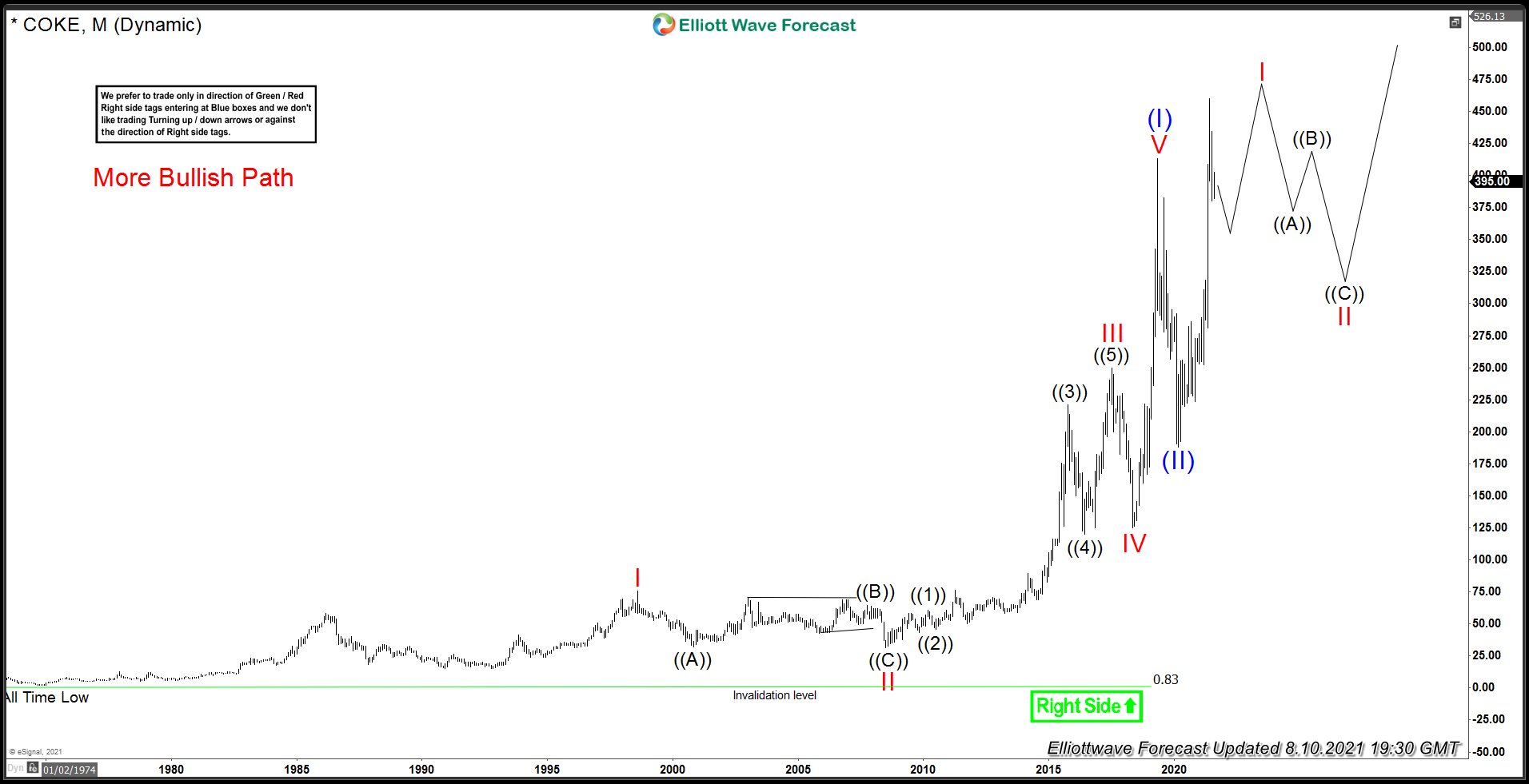 We can also see that price did take a hit on June 15 but Ronaldos’ actions just acted as a catalyst, market was already pulling back after having completed wave ((3)) at $460 and we think soon stock will reach a buying area from where it can rally to another all time high and buyers will be thanking Ronaldo for it. 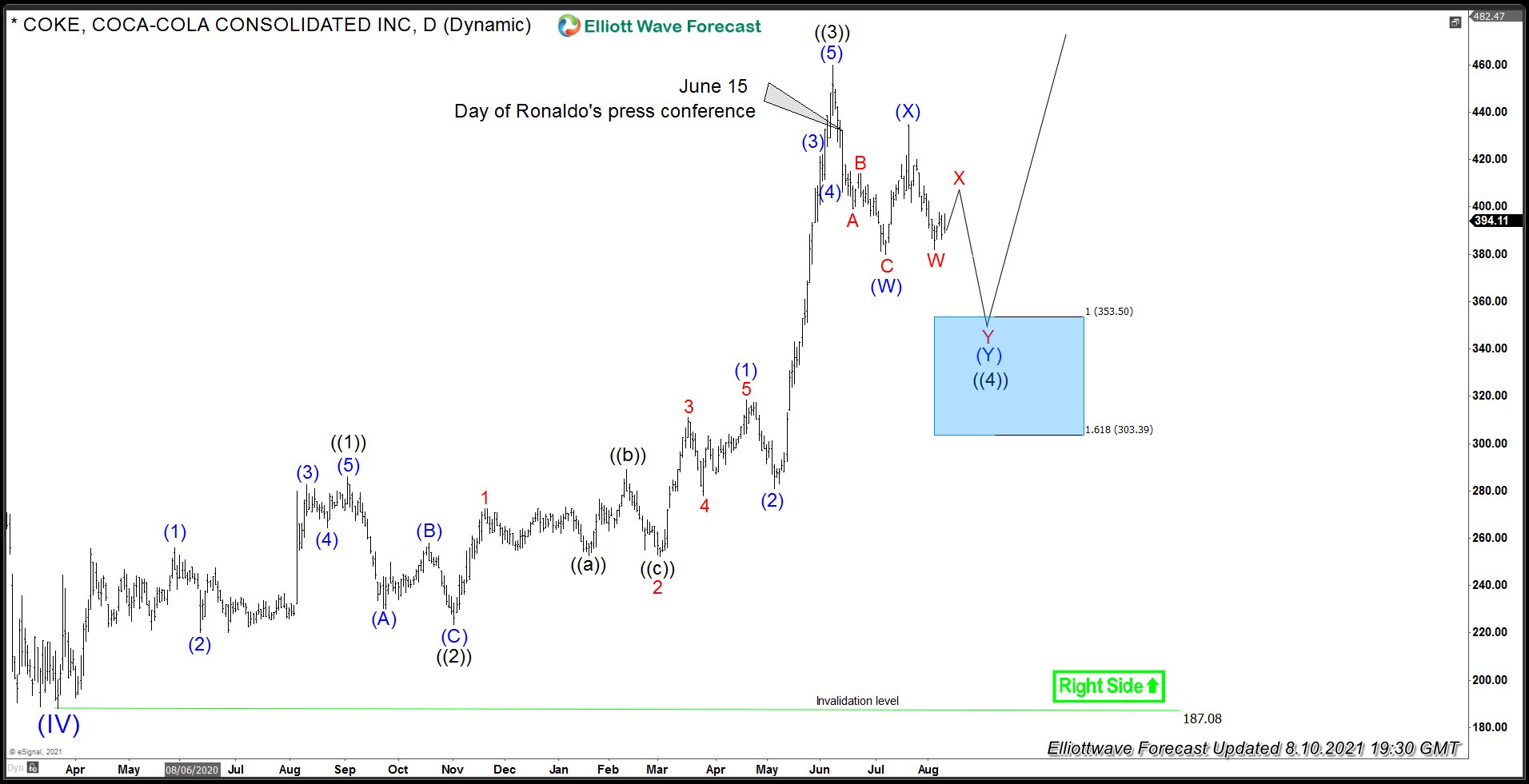