SPX S&P 500 Long Term Elliott Wave view suggests that the Index has reached the minimum target at 2234.35 to end a big cycle from an all time low. If we assume the Index starts from all-time low of 0, then the rally can be labelled as a zigzag Elliott Wave structure. The first leg wave A ended in March 2000 at 1553.11 during the dot com bubble. From March 2000 peak, the Index corrected in 3 waves and reached 50% retracement at 766.67 in October 2002. SPX then started a new leg higher which broke above March 2000 peak and made a new peak in October 2007. Technically, with the break above March 2000 peak, S&P formed a bullish sequence (a higher high) from all-time low and the natural path was to extend higher, especially considering that it has corrected 50% into October 2002 low.

After forming a new peak in October 2007, the Market did an unexpected detour. Instead of the natural path of extending higher, SPX declined strongly in 5 waves into March 2009 low during the financial crisis caused by subprime mortgage default and collapse of Lehman Brothers. This collapse was filmed in the movie titled “The Big Short” where several traders made money by correctly betting in the ensuing crash. In reality however, these traders got lucky as they were trading against a natural cycle, which in Elliott Wave language happens only in a FLAT structure.

The 2009 decline was impulsive and it broke below October 2002 low. Sentiment was very negative at that time and no one was talking about buying the Index. What people don’t realize is that the Market is a reflection of human progress and thus it will never go back to zero. Correction is natural and allows the market to reset. The Market ended a 3-3-5 Expanded Flat Elliott Wave structure in March 2009 and then began the Big Long. Interestingly, nobody is filming or talking about the Big Long, and nowadays most people still talk about the impending big crash almost every single year even when the market keeps rallying. Almost nobody is talking about how great the move higher is as people don’t understand the primary trend in the human nature is higher.

Right now, S&P has reached an interesting weekly inflection area in which we can label the entire move from all time 0 as a zigzag Elliott Wave Structure. Wave A started from all-time 0 to 2000 high. The 3 waves correction from 2000 high to 2009 low is labelled as wave B and take the form of Expanded Flat. Then from 2009 low to present day, it is labelled as wave C.  The minimum target wave C = A at 2234.35 has been reached, but that doesn’t mean the Indices will crash from here. We acknowledge that the Index could indeed have a decent pullback from this area, but keep in mind that it’s possible for the Index in short term to keep extending higher in months/ years ahead within the blue box at 2234.35 (100% of A-B) to 3196.41 (161.8% of A-B).

If the Index manages to extend to 3196.41, then the whole move from all-time 0 can be labelled as 1-2-3 with wave 4 and wave 5 to come, instead of ABC. If SPX manages to reach 3196.4, the third wave in this case is extended, which is the typical characteristic of wave 3 in an impulse. Thus the Big Long at this point in time can even become an extra Big Long, until we get contrary evidence that this is not going to unfold into an impulse from all time low. 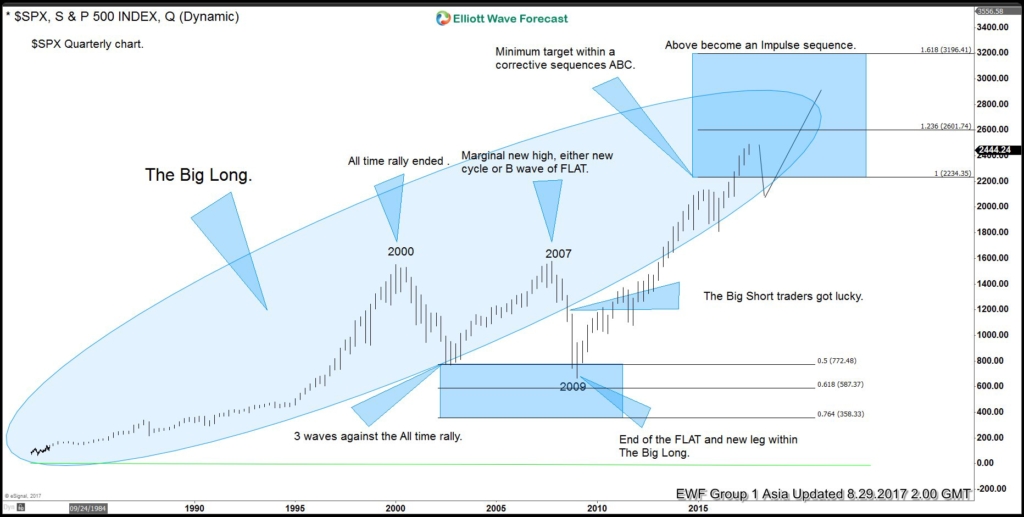 Below please find the recording of our public seminar on 8/28/2017 in which we discussed about S&P and the state of World Indices at this time.