The Market, for years, has been seen as a reaction to a series of events around the world and how investors react to those events. Without any question, the United States of America presidential election is one of most watched events around the World. We at Elliottwave-Forecast.com, believe in the idea that the Technical trade is able to anticipate the future and we have proved that time and again over the years. Looking at the SPX cycles since the all-time lows, it is very clear how every swing has happened due to a technical reason and had nothing to do with the party in government. All the swings had a lot to do with the cycles and technicals. Let’s start looking at SPX cycles since 1980 which started a Republican period of 12 years in which the Market trended to the upside and the reason for that was a bullish sequences since the all-time low. When Reagan took over, market was showing 3 waves and was in need of wave 4-5 to the upside. Then comes the 1992-93 period, the start of Bill Clinton presidential cycle. At that time, $SPX was showing a high with divergence but looking at how deep the RSI was in previous correction, upside was the path to follow which was also supported by the trend of Human progress, so regardless of who won the Presidential Election in 1992, the Index would have rallied.

Democrats were the ruling party in 1992 and the market rallied. This period saw wave 3 of III and extended until market showed a huge momentum divergence in wave V and ended the cycle from the all time low, or at least a  portion of the cycle. By the time that George W . Bush became president, the Market was showing a divergence. Regardless who became president at that time, whether George W. Bush or Al Gore, most likely the Market should have corrected anyway based on the Elliott wave Theory, due to the momentum divergence at the peak and the extension in wave III which negates the idea that the sequence was corrective. During George W. Bush’s presidential term, the Market saw a huge decline, and we believe the Market should have done that no matter which party was in the government as it is the nature of the Market. The decline showed a technical FLAT structure which is a 3-3-5 and took another 8 years period to end. As always, wave C of a FLAT is very strong, and that is what created the 2008 financial crisis. However, the Index was correcting the all-time cycle and ended between the 50%-61% natural area to end the cycle and started the recovery.

At that time, Barack Obama’s presidential term started, and the target was very clear for another 8 year cycle to another natural target which is the 2220 area, which is the target that we’ve been looking for at Elliottwave–forecast.com for the last 6 years. Presidents sometimes take credit for the Market performance when the market is doing good, like Reagan, Clinton and Obama periods. However, in reality it all depends on where the Market stands at the time of the presidential term. George W. Bush took office at the wrong time, and consequently saw a market correction. Now president-elect Donald Trump is taking office at a time in which some sort of correction is due in the Market. At this moment, the degree of correction remains to be seen but Market can correct at least the cycle from 2.12.2016 low, and even from 2009 low which if happening will be the biggest correction we have seen, bigger than the one seen under George W. Bush. As we are reaching the all-time 100% at 2220 area and the Market is showing divergence since the lows at 2009, no matter which candidate won the 2016 election,  the Market should not be very friendly. At the end, the Market follows cycles and the history provides the background story for it. As we always said, the idea of trading is anticipating the move. Looking at the chart for an explanation, we can tell how good or bad a president can be for the economic world  based on the technical aspect and not which affiliation party and economic agenda. We hope this blog helps you understand better trading looking for anticipation and not for reaction. 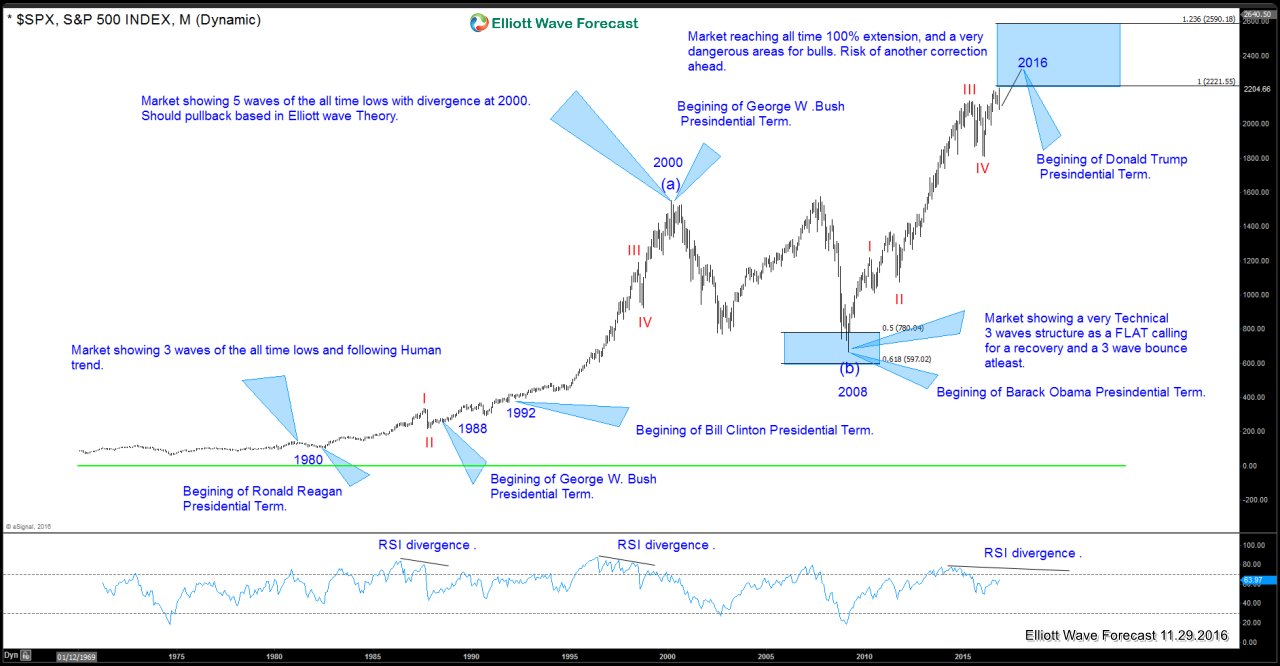 Market is constantly moving, therefore, you need someone to help you stay on top of all the changes, be on the right side and help with the Trade selection process. Therefore, we provide the forecasts for 50+ markets from around the globe including Forex, Commodities, World Indices and TNX with 2 Daily Live Analysis Sessions, 24 Hour Chat Room, Live Trading Room & Strategy of the day /week etc, get  14 day Trial  (for new members only).