The S&P/TSX Composite Index has been trending higher with other world indices. As far back as one can find data, the cycles have shown a bullish trend. From early years not seen on this chart it rallied with other world indices trending higher into the June 2008 highs. It then corrected the bullish cycle as did most other world indices. The index ended that larger degree correction in March 2009. It is at this point where the index corrected the whole decades long bullish cycle. Thus the March 2009 lows is from where this cycle and swing analysis will begin.

Firstly from those 2009 lows the index shows a 5 swing sequence that favors further upside. Price has reached and exceeded the 61.8 – 76.4 Fibonacci extension of the 2009 to 2011 bullish cycle. This happened in September 2014 under the more conservative red swing count. This area was also seen in the preferred blue count the 61.8-76.4 Fibonacci extension was reached and slightly exceeded in January 2018.

Secondly, I want to mention how this Fibonacci extension is measured. Use a Fibonacci extension tool on a charting platform. Point 1 will be at the beginning of the cycle at the 2009 lows. From there on up to the 2011 highs will be point 2. The point 3 will be down at the 2011 lows. This put the swing higher to the 2014 highs in the aforementioned 61.8 – 76.4 Fibonacci extension of the 2009 to 2011 bullish cycle. That alone is not a usual place for the 3rd swing of a cycle to end as it is usually 100 to 1.236.  The decline to the 2016 lows was strong enough to suggest the index had corrected the whole cycle up from the 2009 lows. This, other than the bullish trend is why I prefer the swing count in blue. 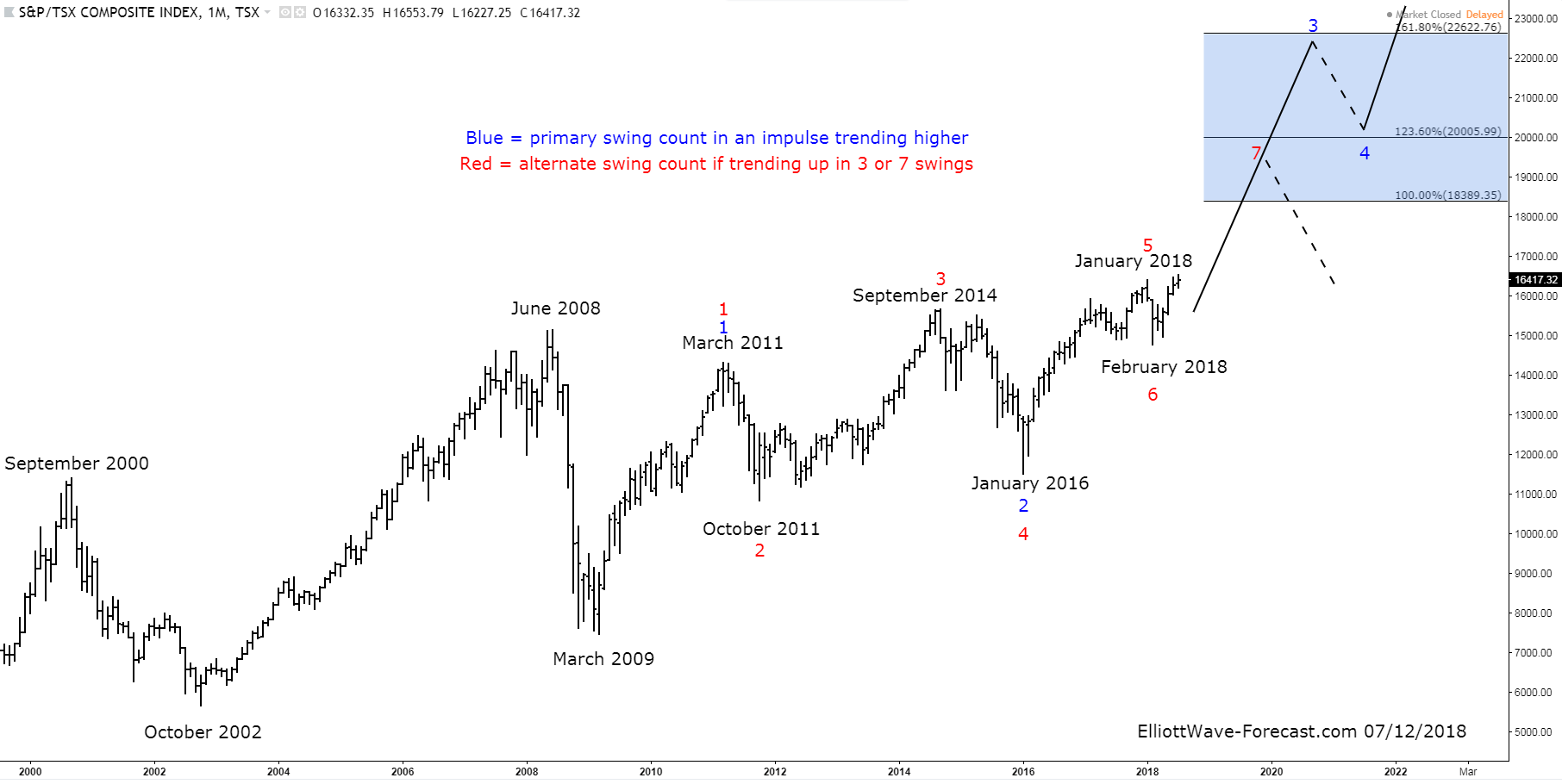 Thirdly, I will mention the way the blue swing count and target area is measured. Using the earlier mentioned Fibonacci extension tool on a charting platform, the point 1 will be at the beginning of the cycle at the 2009 lows. From there on up to the 2011 highs will be point 2. The point 3 will be down at the 2016 lows. This is how the shown target area is derived. The index in January 2018 saw the 61.8 Fibonacci extension of the 2009 to 2014 cycle. In most cases a fifth swing of a 7 swing move will end in this 61.8 – 76.4 Fibonacci extension area. The dip into the February 2018 lows suggested it was only correcting the cycle from the 2016 lows. From the February 2018 lows the index has went back into new highs territory.

The conclusion is as follows. The index should trend higher in either scenario. This should happen before seeing a pullback lower of the same size of the 2014 to 2016 dip. While the index corrections remain above the February lows, price should trend higher toward the 19000+ area. That is under the more conservative alternate swing count view. The preferred view is while above the February 2018 lows, prices will trend higher toward the 22622 area in an impulse.

Thanks for looking and feel free to come visit our website and check out our services Free for 14 days and see if we can be of help.