Quantumscape is a developer of next generation battery technology.  with major high profile investors involved in this company, it has the backing to become the next interrupting technology in the EV sector.  Lets take a look at the company profile and see who has backed this company:

“QuantumScape was founded in 2010 by Jagdeep Singh, Tim Holme and Professor Fritz Prinz of Stanford University. In 2012, QuantumScape began working with German automaker Volkswagen. After that 2018, Volkswagen invested $100 million in the company, becoming the largest shareholder. In the same year, Volkswagen and QuantumScape announced the establishment of a joint production project to prepare for mass production of solid state batteries. In June 2020, Volkswagen made an additional $200 million investment into the company.  It is also noteworthy that Bill Gates is also an investor in QuantumScape.

On September 3, 2020, QuantumScape announced a merger with the special-purpose acquisition company Kensington Capital Acquisition. As a result of the merger, QuantumScape will receive $1 billion in financing, including funding from Volkswagen and the Qatar Investment Authority. At the same time, the company’s shares will be listed on the New York Stock Exchange under the symbol QS. The transaction was completed in November 2020 and raised capital for the series production of batteries.”

Lets dig into the charts! 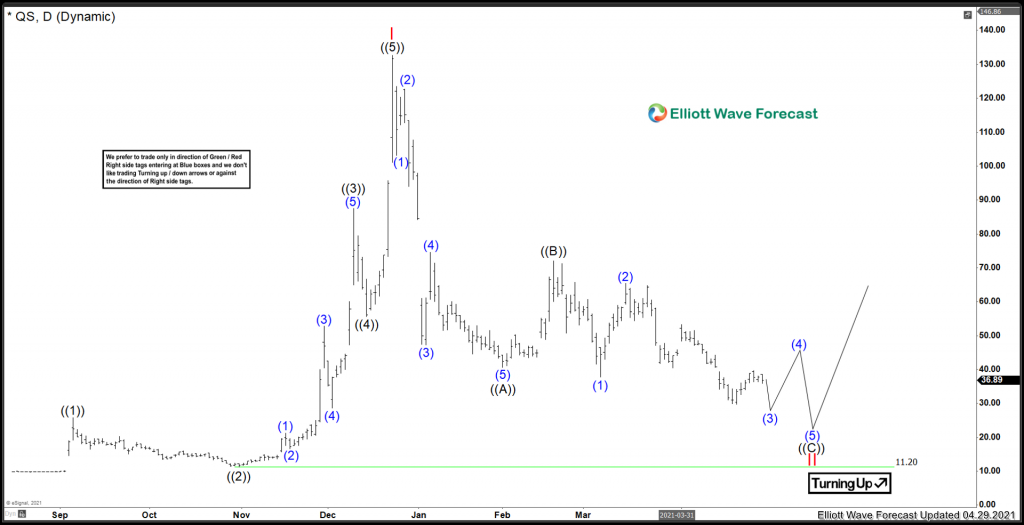 The current view is that the structure needs another couple swings lower to complete the sequence from the peak.  There is no equal leg extreme since the 100% area would go into the negative.  The best tools to use now is watching for momentum to erase the pivots and set a new extreme at the Red II low.

In Conclusion, as long as ((B)) high remains intact, prices can grind lower before resuming the upside.