The MOEX Russian index has trended higher with other world indices since inception. The index remained in a long term bullish trend cycle into the December 2007 highs. It made a sharp correction lower in 2008 that lasted until October 2008 similar to other world indices. That is where the index corrected the whole decades long bullish cycle. 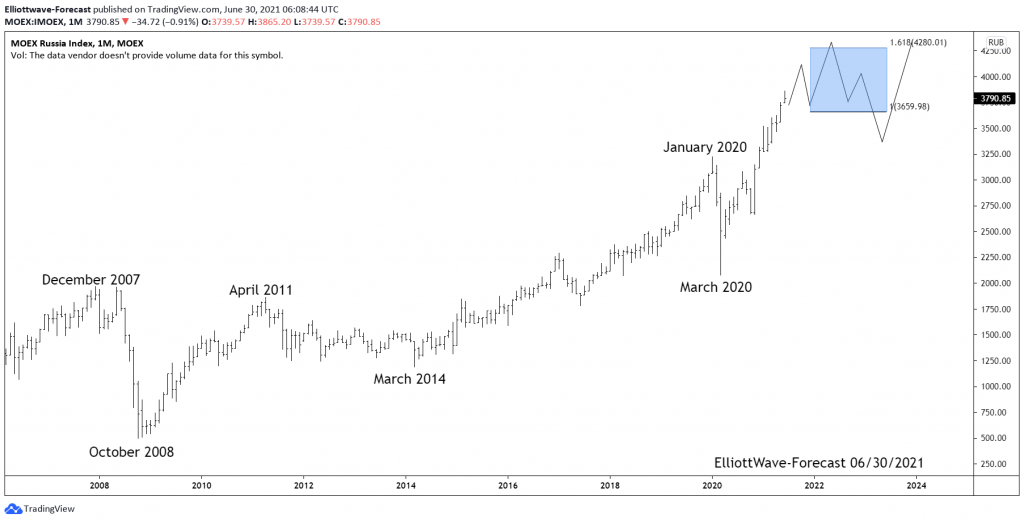 Secondly I would like to mention this overall price movement in the bullish cycles leaves the index in a couple of different scenarios. One way to view it from an Elliott wave perspective is the January 2020 highs was the end of a larger degree third wave. I do not prefer this because it suggests after a few more  new highs back above the January 2020 highs the index will suffer a huge correction bigger than ever seen before.

Thirdly in conclusion. The positive progression of mankind is reflected in equity indices. I do believe in the technical indicators that suggests I saw enough pain in the dips into the 2008 as well as the March 2020 lows that should eventually prove to be longer term cycle lows. I think the index has a longer term series of nested wave ones and twos. As suggested on the chart I think the cycle from the March 2020 lows should continue higher in the near term before a pullback corrects that cycle. I expect the index will remain above there for a long time progressing higher.