The INTC INTEL Stock has the scope to extend higher as we can see in the monthly and weekly charts. Based on the proprietary tools ElliottWave-Forecast.com has implemented we will analyze below the INTC Stock  in the Weekly time frame based 2 degrees.

Basic information about the Intel Corporation:

According to Wikipedia; INTEL is an American multinational corporation and technology company. Headquartered in Santa Clara, California “Silicon Valley”, INTEL was founded by Gordon Moore and Robert Noyce. The INTEL Corp is the second highest valued semiconductor chip maker based on revenue.

Beyond manufacturing the x86 series microprocessors and supplying large scale corporations with such as Apple, Lenovo, HP and Dell, INTEL manufactures as well other electronic components such as:

According to Investopedia, INTEL competitors in the PC client operating and revenue segment are AMD (AMD:NASDAQ), IBM (IBM:NASDAQ) and NVIDIA (NVDA:NASDAQ). Lately we have seen some pressure building from QUALCOMM (QCOM:NASDAQ) Corp after MICROSOFT (MSFT:NASDAQ) and GOOGLE (GOOGL:NASDAQ) trying to replace Data Centers microprocessors with cheapest and more power efficiency from QUALCOMM.

Most noteworthy, INTEL’s direct competition is AMD. Lately we have seen things getting hot in the field of microprocessors. AMD (NASDAQ:AMD) has  introduced a new series of multi core microprocessors code named Ryzen in the pursuit to enter INTEL’s high end performance desktop platform. Even more AMD is in the pursue to catch up with NVIDIA’s (NASDAQ:NVDA) latest improvements introduced with Vega APU’s. For the reason, INTEL has responded back with a new microprocessors series code named Core-X. The new generation series include Core I3, I5, I7 processors plus introducing a brand new model, the Core I9.

The new and improved technology in microprocessors arrived shortly after MICROSOFT (MSFT:NASDAQ) acknowledged the intention to end INTEL’s dominance in the cloud server semiconductor market. Microsoft announced that is teaming up with QUALCOMM (QCOM:NASDAQ) by using ARM processors for servers. Furthermore MICROSOFT announced that would use ARM technology processors for Windows 10 as well later in 2017. During the presentation Microsoft demonstrated Windows 10 running from a Qualcomm 835 ARM microprocessor. APPLE (AAPL:NASDAQ) has been following the same path with Cortex ARM processors for the iPhone but still working with Intel for Desktops while ARM processors luck Intel’s performance.

Without any further delays lets jump into INTC Weekly Chart

INTEL in the weekly time frame is showing a diagonal formation from the 02/2009 cycle lows. The 02/2009 cycle was completed at the 37.80’s peak from where the correction in wave ii started. Hence, at this stage it seems like we have a wave i or a alternatively in place for cycle 02/2009.

To Sum up – INTC Projection:

Finally and most importantly, to confirm the move higher we need to see a break above the 01/27/2017 peak. A break above there should provide an extension to the next level of the 41.70 – 43.70 zone. Furthermore, after short term pull backs we should continue higher again. At the 46.90 we should hit the equal legs of the wave ((1)) – ((2)) swing in black yet there will be room for some extension higher to the 1.236% extension at the 50’s since at that level are the equal legs of the i – ii swing as well.

If you would like to learn how to trade the 3 7 or 11 swings or would like to fine tune the trade in the lesser degree time frames we are almost certain you will enjoy our new plan covering 13 Stocks & 13 ETFs. We provide Daily Technical Analysis in the Weekly, Daily, 4 Hours and Hourly time frame.  Trading opportunities, Live Sessions and many more. 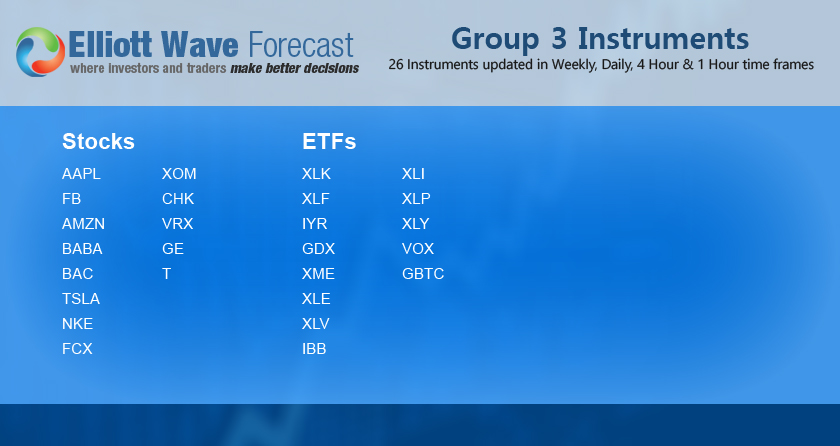