Firstly the GLD ETF fund is one of the largest as well as one of the oldest Gold tracking funds out there since it’s inception date of November 18, 2004. From there on up into the September 2011 highs it ended a larger bullish cycle as did the Gold commodity in terms of US dollars. From the September 2011 highs the price decline was pretty steep however does appear corrective as a double three (a)-(b)-(c) (in blue color) into the December 2015 lows.

Secondly I would like to mention that the bounce from the December 2015 lows at 100.23 into the July 2016 wave (i) highs (in blue) is clearly an Elliott Wave impulse. The bounce was strong enough to suggest it ended the cycle lower from the September 2011 highs as well thus at this point it is very much suspected to be resuming a long term bullish trend from the December 2015 lows. As shown above from there the metal made a wave (i) high in July 2016. From there it appears to have made a simple a-b-c structure to end the wave (ii) (in blue) at the December 2016 lows. 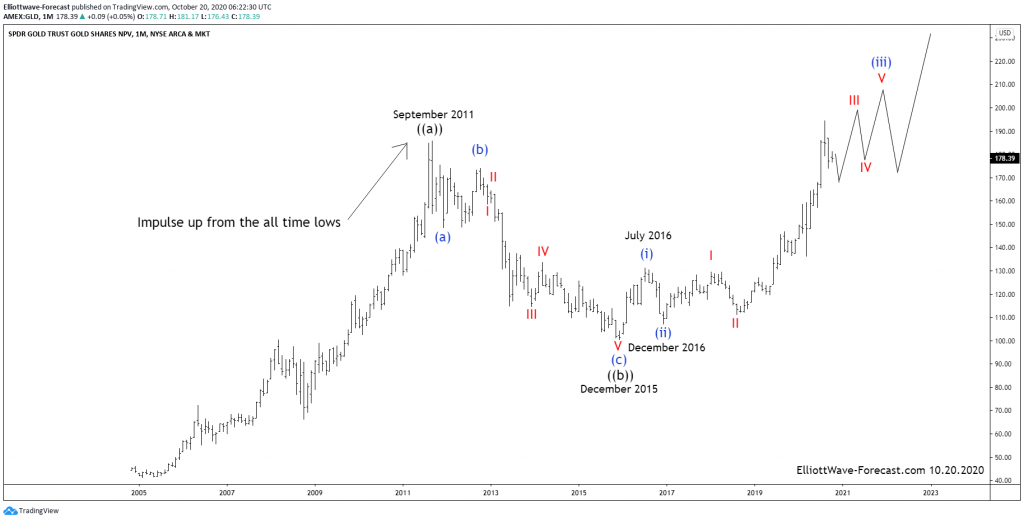 Thirdly in conclusion: From the wave (ii) (in blue) lows from December 2016, the bounce higher appears to have an incomplete bullish sequence of five waves up in an Elliott Wave impulse. Currently the metal instrument appears to be correcting the cycle from the March 2020 lows. This should end ideally above the 152.00 area. That is 50% Fibonacci retracement of the cycle in the red wave III. This is a usual allowance we expect a fourth wave to remain above. While above there expect the metal higher toward the larger degree equal legs of the ((a))-((b)) move at 286.08.