During the dinner meeting at G20 summit in Buenos Aires last weekend, the U.S. and China agreed to suspend new tariffs for 90 days. The market reacts positively with stock market rallying around the world, creating a risk on environment for potential Santa Claus rally in December. However, has a real significant breakthrough made during the meeting and how sustainable is it?

President Trump  previously threatened to increase the tariff for the $200 billion of Chinese goods from 10% to 25% on 1 January. The truce buys time for both countries to reduce their trade imbalance between the two countries. The thornier issues however relate to the dispute on China’s predatory intellectual property and forced technology transfer practice.

Under the agreement, the two countries have 90 days to resolve their differences over Beijing’s tech policies. If they can’t, the U.S. will go ahead and increase the tariffs on Chinese goods to 25%. The Chinese has already agreed to buy a substantial amount of agricultural, energy, and industrial products to reduce the trade imbalance. President Trump also said in his personal twitter account that China will reduce the auto tariff. China previously increased the tariff for U.S. cars to 40% from 25% as a form of retaliation.

Both sides also agree to immediately begin negotiations on structural changes with respect to forced technology transfer and intellectual property protection. The U.S. also says that Beijing agreed to designate Fentanyl as a controlled substance. The opioid, which is believed to be largely made in China, has been driving a huge rise in drug addiction in the US.

However, make no mistake, this truce is not the end of the trade war but merely a suspension of the escalation of the trade war. The current tit-for-tat tariffs still remain in effect and the truce hasn’t undo it as the chart below shows. Future escalation is also still possible depending on how far Beijing will allow International access to its market that satisfy Trump and his administration. 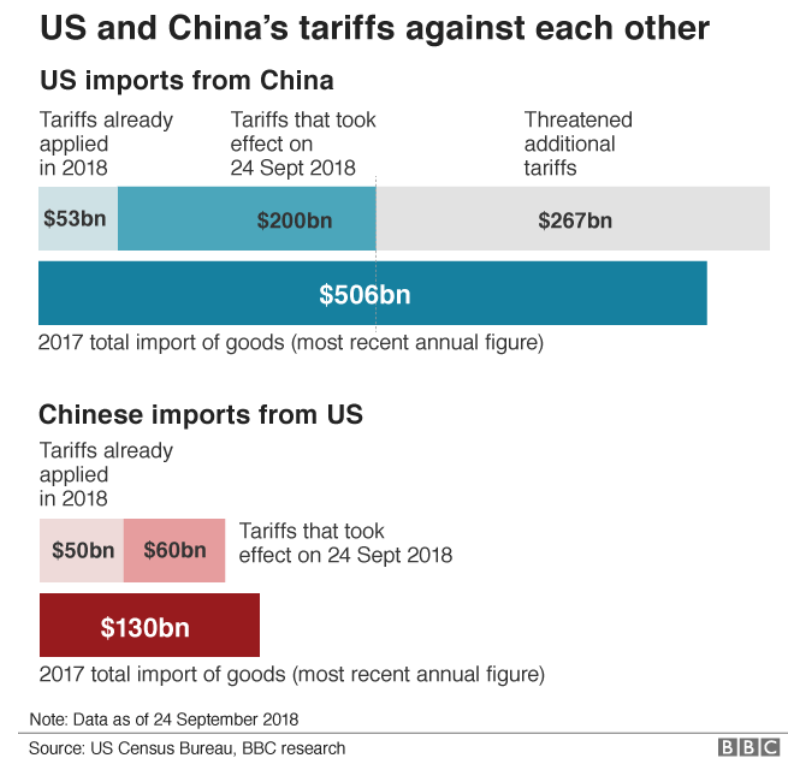 Even if we assume the U.S. and China can make a grand deal within 90 days, trade war is not the only factor driving the market. An even bigger major factor is quantitative tightening by the Fed. As of November this year, the QT or Quantitative Tightening is still running at a maximum pace of US $50B per month. This works the opposite of Quantitative Easing (QE). If QE is responsible for the rally in equity market in the past 10 years, then QT may have the opposite effect of it.

We will take a look at a few World Indices below

Short Term reaction in the world index is a risk-on rally. However, world Indices must break to all-time new high above the Sept peak to confirm that a new bullish leg has started. In the shorter term, ES_F (S&P 500 E-Mini Futures) may see more upside to 2840 – 2890 which will be the decision area for the Index either to pullback and extend higher or to do double correction and breaks below 10.29.2018 low. 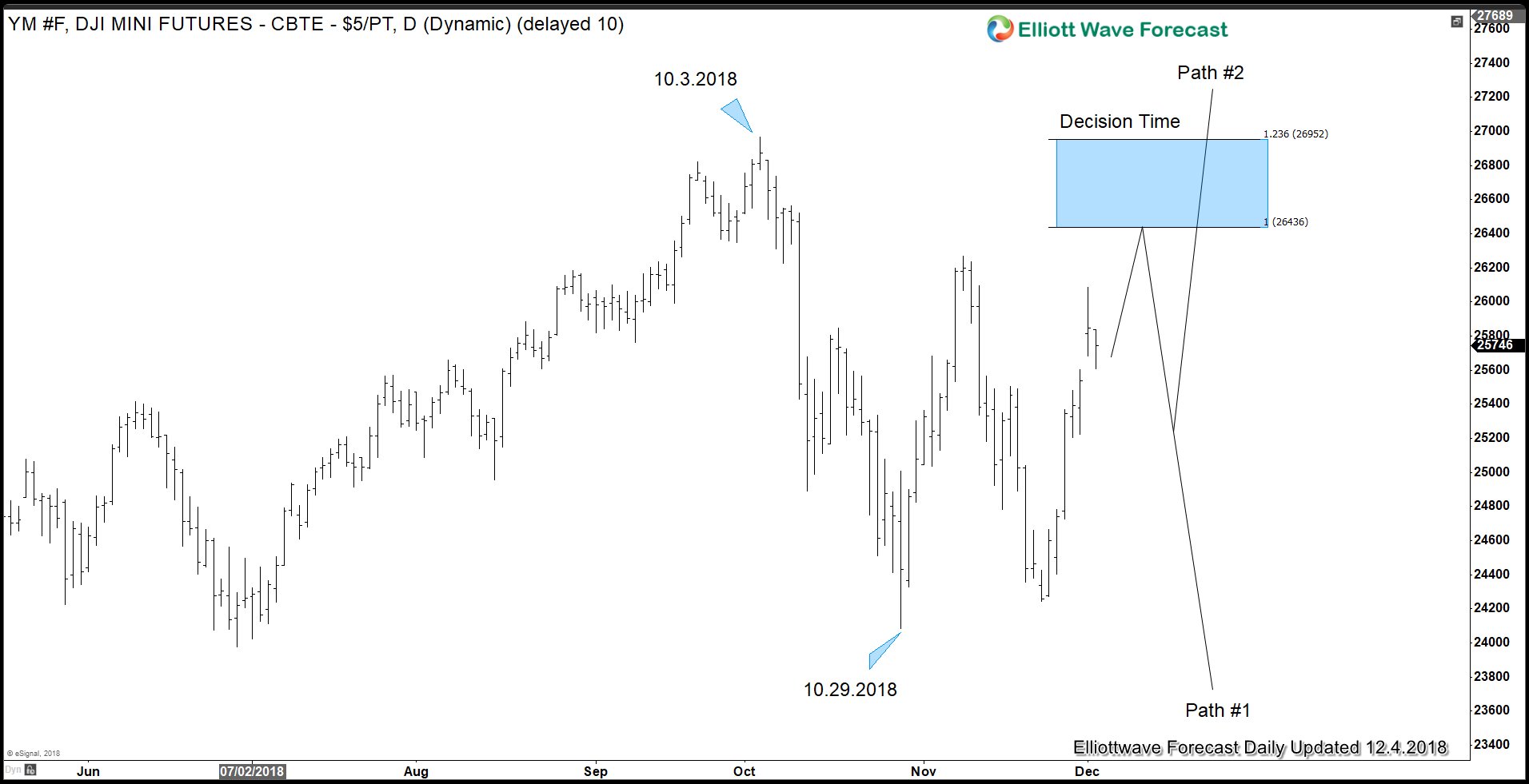 Same outlook can be seen in Dow Futures (YM_F). The Index needs to break above 10.3.2018 high to confirm that a new bullish leg has started. Until then, a double correction (Path #1) still can happen. Near term, the Index has scope to extend higher towards 26436 area which will decide the next path in the Index. 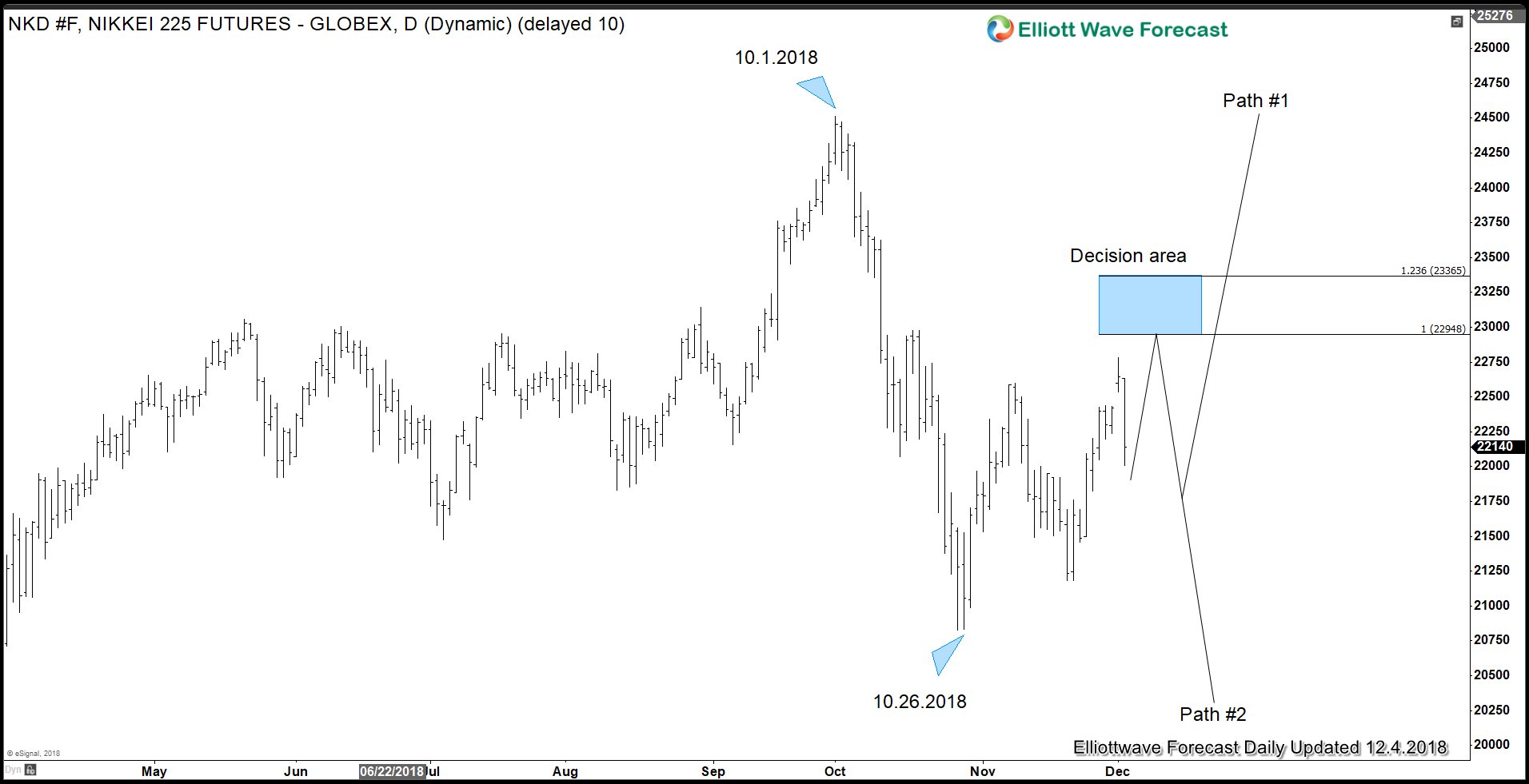 Nikei Futures (NKD_F) also show the same outlook. It rallies in response to the trade war truce. However, in order to confirm a new bullish cycle, it must break above 10.1.2018 peak. Until then, a double correction (Path #2) can not be ruled out. Near term, the Index has scope to extend to 22948 – 23365 area which will determine the next 4 hour move in the Index.

Keep in mind that market is dynamic and the outlook may have changed since this article is written. To get the latest update, we offer 14 days Free Trial so you can check our comprehensive service, including Elliott Wave charts in 4 time frames, member-only chat room support, education, and more.  Click here to start your trial –> I want 14 days Free Trial