Firstly the CPER Copper Index Tracking instrument has an inception date of 11/15/2011. There is data in the HG_F copper futures before this going back many years. That shows copper made an all time high on February 15th, 2011 at 4.649.  Translated into this instrument, it is mentioned on the monthly chart. The decline from there into the January 2016 lows appeared to have been a double three in the commodity HG_F.  Thus I will work with that idea in this CPER instrument.

The analysis continues below the CPER monthly chart. 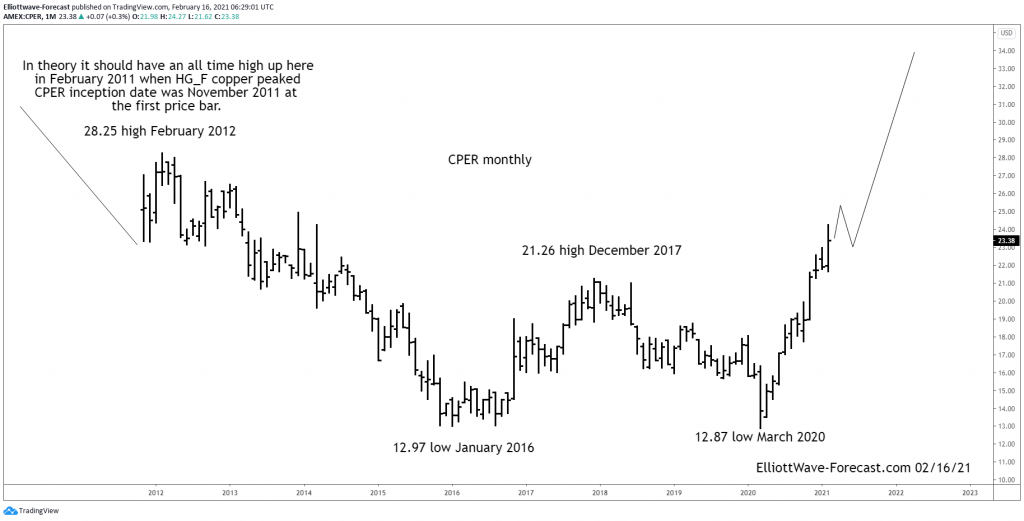 Secondly the CPER Copper Index Tracking instrument from the all time highs made what is favored to be a double three correction lower. This ended at the 12.97 lows in January 2016. From the January 2016 lows up into the December 2017 highs appeared to be another double three structure. The bounce was strong enough on momentum indicators to suggest it had ended the cycle lower from the all time highs.

Thirdly, the CPER Copper Index Tracking instrument decline from the December 2017 highs is very ambiguous.  This means it is open to more than one interpretation as is most any chart by an Elliott wave analyst. The key points here are as follows. From the 12.87 low from March 20th 2020 created a bearish sequence by taking out the lows from January 2016. This means it could have been a 5th swing lower from the all time highs. The bounce from there in our trend system looks strong and impulsive as well as again suggesting it ended the cycle lower from the all time highs.

In conclusion: Copper has not made another low under the January 2016 lows as did CPER. Each have went well past the December 2017 highs. The price action has denied the usual 7th swing lower in CPER.  This instrument should hold well above the March 2020 lows when it corrects the cycle up from there.