ContextLogic Inc. is the latest meme stock to catch some attention.  But is it a worthwhile trade?  I must preface this blog with the fact that this stock does not have much data.  However, elliottwave can still be useful in shorter cycles.

Lets take a look at who and what this company is:

“Wish was started by Piotr Szulczewski, a former Google engineer, as a software company called ContextLogic. In September 2010, ContextLogic received $1.7 million in investments and involved Yelp CEO Jeremy Stoppelman. In May 2011, Szulczewski invited college friend Danny Zhang to relaunch the company as Wish. It was created as an application that allowed shoppers to create wish lists of their favorite products. They also earned revenue with a Pay-per-click model by advertising on Facebook.

In 2013, Szulczewski met with Hans Tung, an investor with GGV Capital in Menlo Park, California.  And noted that a large number of sales were coming from Florida, Texas and the Midwest rather than New York or California. Wish became an e-commerce site after asking merchants to host their products directly on the Wish application. In 2017, Wish was the most downloaded e-commerce application in the United States.  It signed a multi-year partnership with the NBA’s Los Angeles Lakers.

In 2018, Wish was the most-downloaded e-commerce application worldwide. The company doubled its revenue to $1.9 billion. As of 2019, Wish was the third-biggest e-commerce marketplace in the United States by sales.  In August 2019, ContextLogic received a Series H funding round, led by equity firm General Atlantic, taking the company’s assets to $11.2 billion.  JD.com is an investor in Wish. ContextLogic went public via an IPO in 2020.” 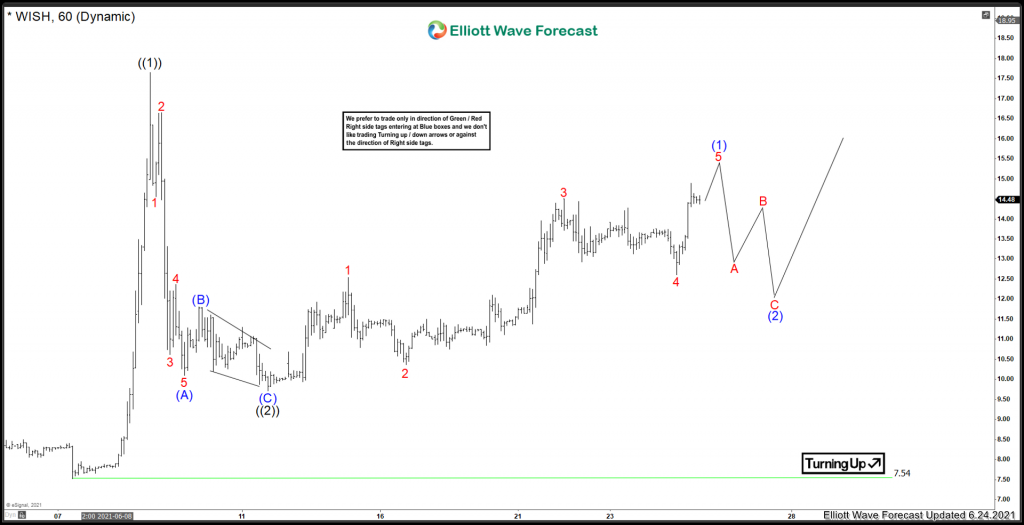 Medium term term view from the all time low set June 7/2021.  This stock does not have much structure in the initial wave higher from 7.54 to the 17.65 peak where ((1)) is favoured set.  After that, unfolded in a very sharp pullback and is favoured to be set at 9.71.  After that, the stock has started to act more normal.  From that ((2)) low a more orderly advance has taken place in 5 swing.  A the time of this writing, a little higher can take place before possibly correcting the cycle against the wave ((2)) low.

In conclusion, it should be mentioned, that the low at ((2)) needs to hold, if not, it would be favoured that further downside can happen before ((2)) is set.  Until the peak at ((1)) is taken out, this is more of a speculative view.