When COVID-19 took over the world, the last sector in the world that I thought would surge as much as it did, is CAMPING!  It is important to realize, the Marketplace decides what is hot, and what is not.  To be a successful trader, we need to let go of all emotional reason, and focus purely on the technical analysis.  What is the analysis saying about Camping World Holdings?  It is saying good things.

Lets take a look at what they do as a company:

“Camping World Holdings, Inc. is an American corporation specializing in selling recreational vehicles (RVs), recreational vehicle parts, and recreational vehicle service. They also sell supplies for camping. The company has its headquarters in Lincolnshire, Illinois. In October 2016 it became a publicly traded company when it raised $251 million in an IPO.  Camping World operates 120 retail/service locations in 36 states, and also sells goods through mail order and online. It claims to be the world’s largest supplier of RV parts and supplies. Recently, it has become the title sponsor of the Camping World Stadium, as well as the Camping World Bowl, which is played in the same stadium. It’s also the official presenting sponsor of MLB’s League Championship Series.”

Lets dig into the chart! 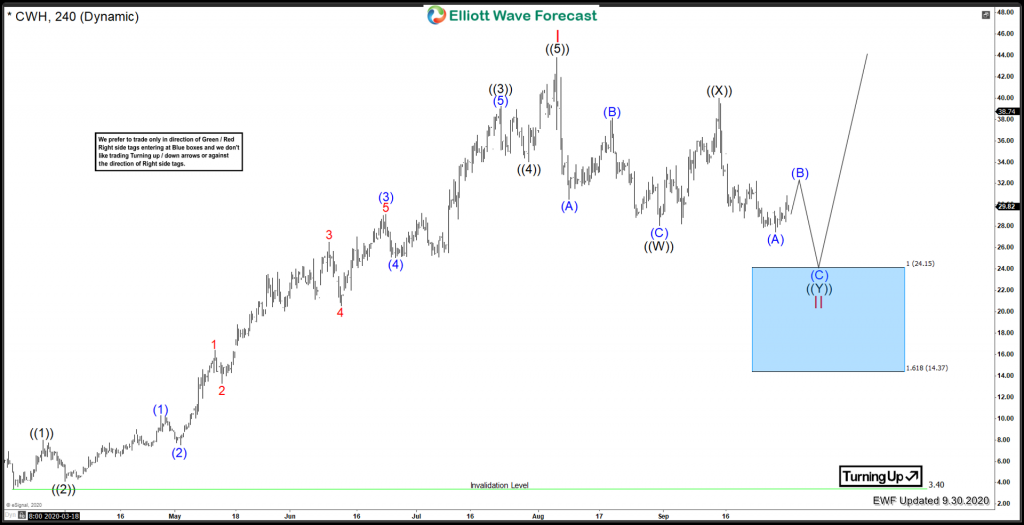 There is not much data to go off of on this chart.  Camping World set an all time low of 3.40 during the March rout.  From that low, it rallied a staggering 1200% from the lows set in March.  On a 4H view, from the all time low 3.40, there is 5 waves impulse is complete for Red I @ a price of 43.80.  This wave peaked around 5 months after the low that was set in March. After that peak, Camping World has been correcting the March cycle since that time.  It is favoured to be in a double correction lower, with at least another low favoured to take place before prices turn back up.

The Blue Box Extreme is an area where buyers may enter for a bounce in 3 waves at least.  The 24.15 to 14.37 area can provide a good opportunity for a long setup.  Always make sure you have stops in place below the box.  If prices bottom in Red II at the 24.15 area, an equal leg move to the upside targets the 64.58 area, which is a great risk reward setup.