AMC Entertainment has become the new poster child for the Ape Movement since $GME (GameStop) peaked in January 2021.  The rally has been nothing short of breathtaking as traders saw the price move from $11 to $73 in the span of about 10 days.  But can the rally continue?  Let check out the company history below:

“AMC Entertainment Holdings, Inc. (AMC Theatres, originally an abbreviation for American Multi-Cinema; often referred to simply as AMC and known in some countries as AMC Cinemas or AMC Multi-Cinemas) is an American movie theater chain headquartered in Leawood, Kansas, and the largest movie theater chain in the world. Founded in 1920, AMC has the largest share of the U.S. theater market ahead of Regal and Cinemark Theatres.

After acquiring Odeon Cinemas, UCI Cinemas, and Carmike Cinemas in 2016, it became the largest movie theater chain in the world. It has 2,866 screens in 358 theatres in Europe and 7,967 screens in 620 theatres in the United States.

The company is listed on the New York Stock Exchange; from 2012 to 2018, the Chinese conglomerate Wanda Group owned a majority stake in the company. Private equity firm Silver Lake Partners made a $600 million investment in AMC in September 2018, but the voting power of AMC shares is structured in such a way that Wanda Group still controlled the majority of AMC’s board of directors.

Amid financial downturns caused by the COVID-19 pandemic, in January 2021 Wanda’s ownership was increasingly diluted due to new financing by AMC, and Silver Lake converting its $600 million debt holding to equity after a short squeeze. In early-February 2021, Wanda converted its Class B shares to Class A shares, thus reducing its voting power.  AMC has been able to raise over 1 Billion in capital since January 2021, to put the company in a better position for future growth” 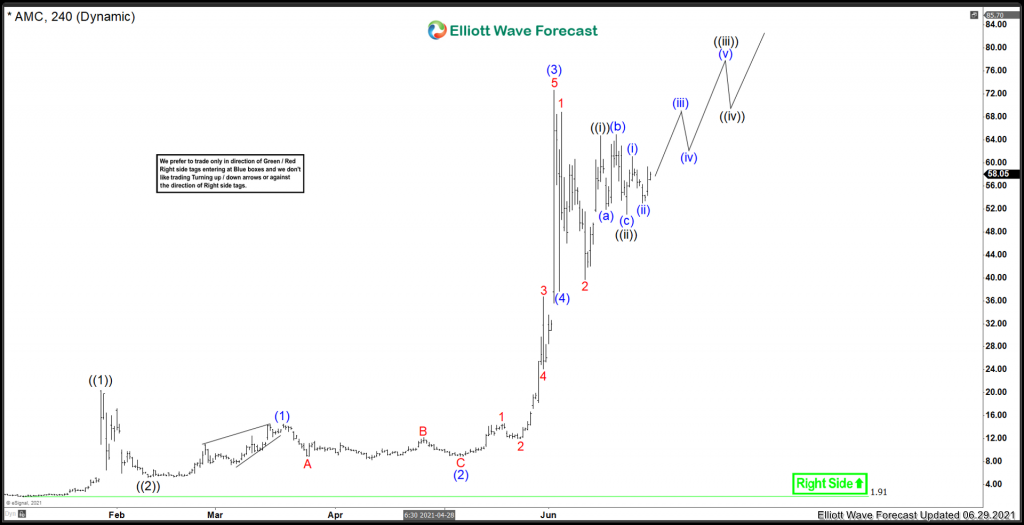 In Early May 2021, the stock formed a wave (2) low in the form of a complex flat structure.  After that, momentum started to pick up into Red 1, with a short lived pullback into Red 2.  After that, the chase was on.  A very impulsive wave (3) took hold bring the stock from the (2) low of 8.97 to 72.62 peak.  A pullback in (4) is favoured to be set, and the stock appears to be nesting some wave 1s and 2s consolidating for the next leg higher.

As long as the (4) low @ 37.66 remains intact, further upside is favoured.  Should that low give up, the next equal leg area where buyers may enter is the 33.63 area.  On the upside the next area where a larger pullback can take place is the 80.95 to 94.36 area.  The momentum continues to support the idea for further extension higher for now.