The recent Boeing 737 Max 8 crash in Ethiopia has led to an unprecedented crisis for the world’s largest manufacturer of passenger jets. Only a few months back, Max 8 was the most sought after passenger transport with about 371 jets flying to various destinations and about 5000 firm bookings, the kind of success aircraft manufacturers aim to accomplish.

But the fatal crash by Ethiopian Airlines on March 10th has changed all that. Not only has it led to a massive worldwide stir with aviation authorities across continents grounding the jets, even passengers and crew were nervous to fly on them before the ban, and unless Boeing comes up with a solution quickly, the future of the US aircraft manufacturer’s large order book looks to be in jeopardy.

Boeing is not new to this kind of crisis. In the late 1965 and early 1966, four new 727 passenger jets crashed while attempting to land at US airports with two crashes occurring within a few days of each other. Although, concerns about the jet quickly faded after Boeing ascertained that the aircrafts are safe, the planes were a major success and Boeing sold more than 1,800 jets before retiring them in January this year. This time around too, the company is hoping passengers will get over the fear of flying the 737 Max planes even as the company’s engineers scramble to fix the flight’s automated control systems, the key issue which is likely to have caused the fatal crashes.

With new shocking facts being revealed every day, the Federal Bureau of Investigation (FBI) has joined the widening probe to determine how the aircrafts were deemed safe and certified even as reports emerge that pilots flying the Max 8 were trained on the operational aspects of the flight on IPads with no information provided on the MCAS.

While Boeing was able to quickly recover from the 1965-66 crash, this one could lead to an unusual prosecution, the first for the aircraft manufacturer as critics question the FAA’s urgency in certifying the aircraft without thoroughly reviewing the jet’s technical documents.

Coming to the performance of Boeing’s (BA) stock, the fundamentals are robust with the company’s revenue jumping more than 8-percent to $101.12 billion in the 12-months to December 2018 from $93.39 billion the previous year. Likewise, the diluted EPS spiked to $17.85, a solid growth of about 33- percent in FY 2018 from a year earlier, boosting the company to raise the dividend paid to shareholders from $5.97 in 2017 to $7.19 per share last year.

On charts, the company’s shares have shown resilience up until now in the face of the current crisis with prices rebounding from key chart supports at $367.00 (the gap between January 29th – 30th 2019) after sliding more than 10 percent from the March 8th close. The stock is forming a pennant on the daily chart and in the next few sessions, prices are expected to narrow to $370-380. If prices break below the recent lows of $363.00, the stock could plunge by $55-60. 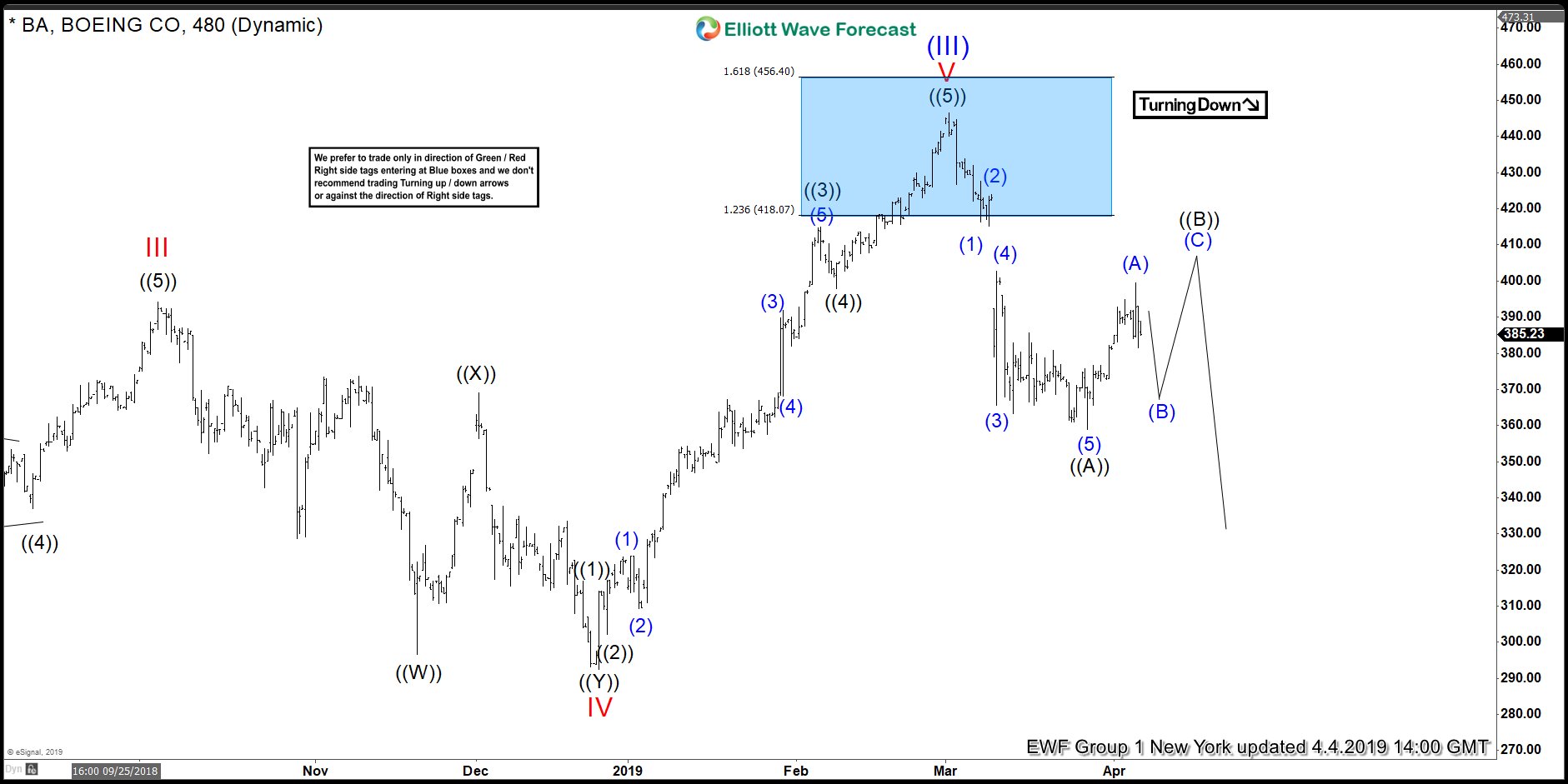 According to Elliott Wave Analysis, Boeing is due for a sharp pullback from the March 1st highs of $446.01. The first leg of this correction ended at $361.53, and prices are due for a rebound before the next nosedive.

The fatal crash involving Boeing’s new 737 Max 8 presents a major dilemma to the world’s largest airplane manufacturer. In addition to the waning confidence of flyers, the ongoing investigation by the FBI is likely to add to the vulnerability of the company’s shares. The long term fundamentals of the company remain robust, but in the short term, shares of Boeing Inc. could witness the biggest correction since 2003.