Defying many market participants that anticipate a fallout after the unexpected Brexit vote, many risk assets including stock markets and Yen pairs continue to show strength after a few days of pullback. U.S. Indices prove to be resilient and continue to make new all-time highs.

The turning point in the sentiment seems to be right after Japanese Prime Minister Shinzo Abe won election in the second week of July and ordered his Finance Minister Taro Aso to compile a fiscal stimulus package by early August. Details of the stimulus have not been given, but estimate by analysts suggest about 10 trillion yen fiscal stimulus. The details of the measures is said to be given in early August and then a supplementary budget may be approved in mid-September.

Compounding the market hype, there was a meeting between former Fed chairman Ben Bernanke and BOJ Governor Haruhiko Kuroda and Abe last week. Some speculated that the meeting was concerning Japan’s attempt to experiment with so called helicopter money, an idea first popularized by American economist Milton Friedman in 1969. The form of the helicopter money considered in Japan is where a central bank directly finances budget stimulus through the issuance of perpetual bonds, which was reported to be in the discussion by Ben Bernanke and Abe’s key advisers in April.

However, it was later found out that Japanese law does not allow the central bank to buy new issues of government bonds, so this idea of helicopter money may not be able to be implemented this year and may take some time to go through the National Diet’s debate to get approval and law amendment.

When looking at the history, supplementary budget did not significantly change the total scale of the budget, and technical recessions still happened during those periods as chart below shows 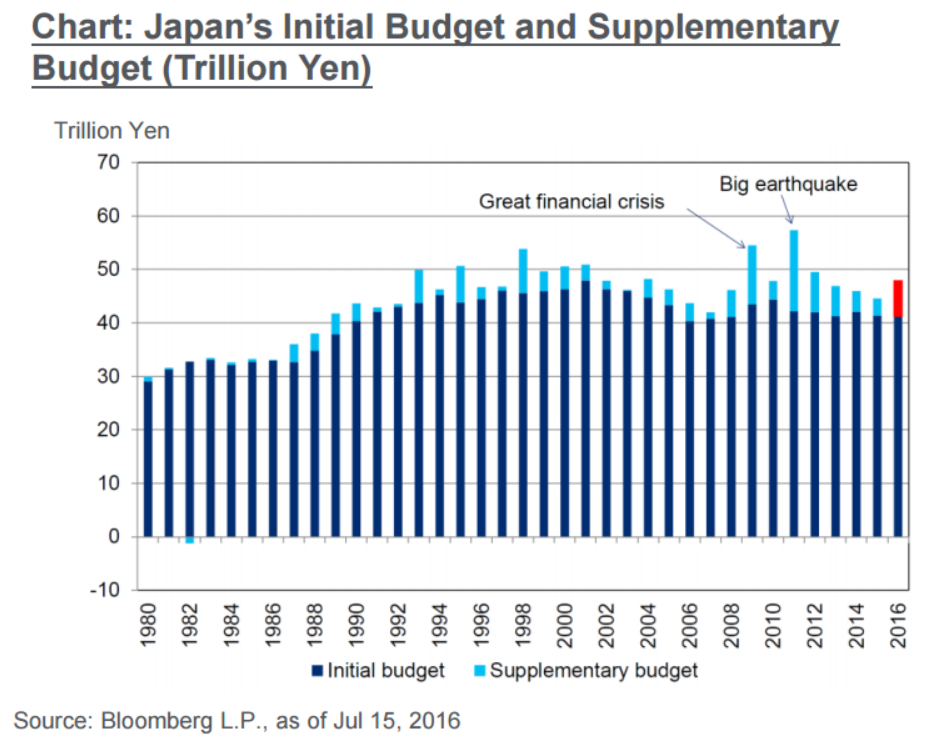 Thus, with helicopter money unlikely to be implemented this year, and supplemental budget has been a standard practice in recent years, there’s possibility that JPY selling in the past few weeks has been overdone and there’s a risk that Yen may regain the strength as the details of the measures are given. 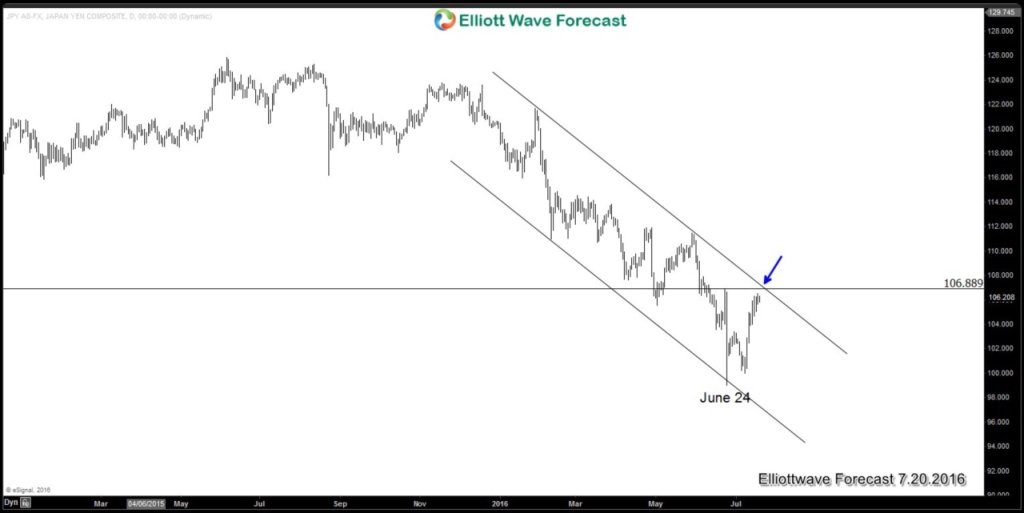 $USDJPY is still trading within the channel and short term can see a little bit more upside to around 106.8 – 107 to reach the top of the channel. As the details of the measure gets unveiled, the risk is that the measures is not significant enough for further weakening of the Yen, and that $USDJPY can start to at least correct the rally from June 24 low in 3 waves.

Take our FREE 14 Day Trial and try our Live Trading Room if you are interested to learn more and find inflection area to trade $USDJPY or other forex, indices, and commodities using Elliottwave technique. We provide Elliott Wave chart in 4 different time frames, up to 4 times a day update in 1 hour chart, two live sessions by our expert analysts, 24 hour chat room moderated by our expert analysts, market overview, and much more!