What is a safe haven?

One of the first principles we learn in FX are market sentiments. The first thing we learn in market sentiments is about how the yen is known for being a safe-haven currency. During global uncertainties, investors tend to shelter their investments. This is within risk off assets as opposed to risk on assets and yen is one of those risk off assets. A risk off asset is a type of investment that is expected to retain value or even strengthen during periods of intense market turbulence. Uncertainty within the economic systemic are practically inevitable, but safe-haven assets are inverse correlated to investors which is what provides shelter to investors.

Fundamentally speaking there are many reasons why yen it is considered as a safe-haven, one of them for starters being that Japan has 0% interest rates, therefore, Japan is considered as a creditor country. For example, is that it is a common currency to borrow for purpose of carry trading.

Alternatively, this is also human behaviour, we are just stuck within a herd-based habit that yen is a safe-haven, therefore, investors just tend to park their investments within yen without a reason except the fact everyone else does it.

Proof is in the pudding

As per shown below, these two tend to negatively correlate, when the S&P500 appreciates, yen depreciates simultaneously against other pairs, especially commodity risk on pairs. The below is a prime example, you can see how these both assets climbed up to October 2022. That’s when the stock market started to correct. We can see yen then built its strength against the New Zealand dollar. 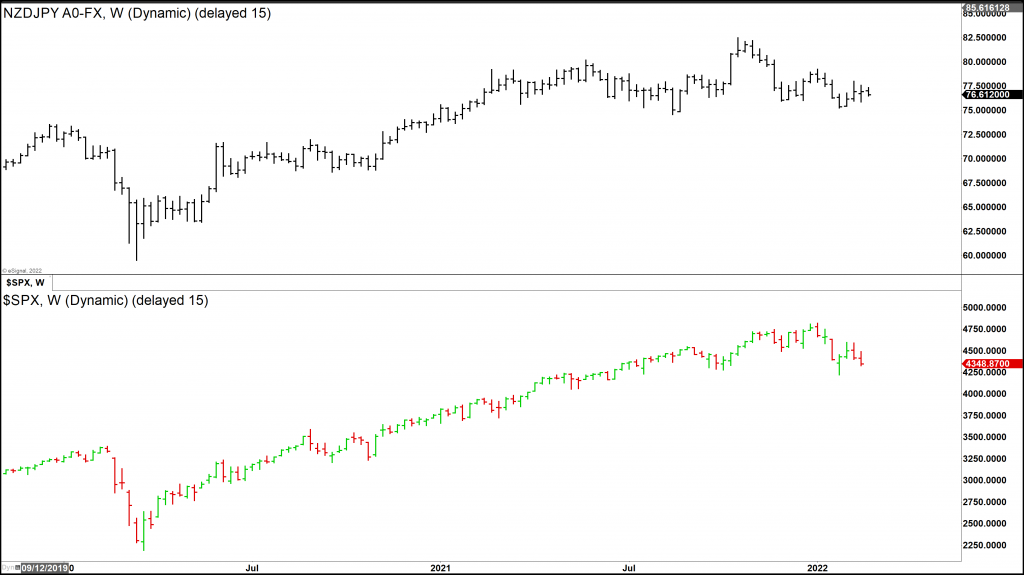 What clue does it provide us with indices now?

Yen negatively correlates against the stock market. Elliott Wave Forecast are concentrating on the next potential move within the stock market, based on yen’s near-term future.

Our first chart that caught our attention was NZDJPY. This is the first pair, against a risk on asset, formed a new low, as per shown below. We are currently unfolding a 5-wave down and aiming to reach ((C)) around 72.66, based on equality of wave ((A)).

This wave count indicates that we should be expecting Japanese yen to strengthen. This indicates that indices are due to correlate negatively against the yen. Therefore, we are expecting the opposite move. However, as yen is a secondary currency against the New Zealand dollar, we will witness them both have a short bias together.

If NZDJPY unfolds wave ((C), we should expect S&P500 breaking a new low prior to appreciation in the near-term future. This move would complete the wave (IV) corrective cycle. Break below 4200 to confirm this and as long as we hold beneath this price, this would put the theory into existence.

This sums up to being a bit more patient with the stock market. Yen is giving us clues that it is on its way to completing a corrective cycle. Therefore, means yen will appreciate in the near-term future.