Background of the Referendum

When the Conservatives party under David Cameron won the general election in 2015, one of the party’s election pledges is to hold a nationwide vote over the UK membership in the European Union. The referendum will happen by the end of 2017, likely sometimes in September 2016. In this referendum, U.K seeks to renegotiate the terms of its membership in the European Union to protect its own interest. Latest opinion polls suggest that 40% of British public want U.K to exit from the EU, leading the term Brexit risk.

Significance of the Referendum

Observation from similar events in the past suggest that volatility in Poundsterling (GBP) increased during domestic and political uncertainty, and this doesn’t bode well for the currency as it usually performs poorly ahead of those events. As examples, volatility in GBP spiked ahead of the Scottish referendum (September 2014) and the general election (May 2015). A graphical representation of GBP implied volatility from Morgan Stanley can be seen below 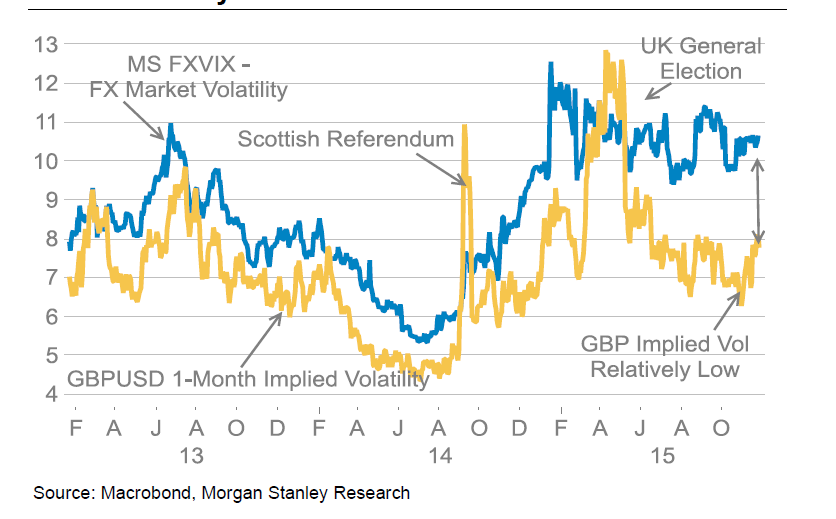 Europe referendum is arguably a more important political event with far reaching consequences compared to the Scottish referendum and general election. Thus, it’s natural to expect the political uncertainty to affect GBP in 2016 and may lead to some pressure on the currency ahead of the event.

With the fundamental background above, let’s take a look at $GBP/JPY, one of the GBP pairs, from the chart below 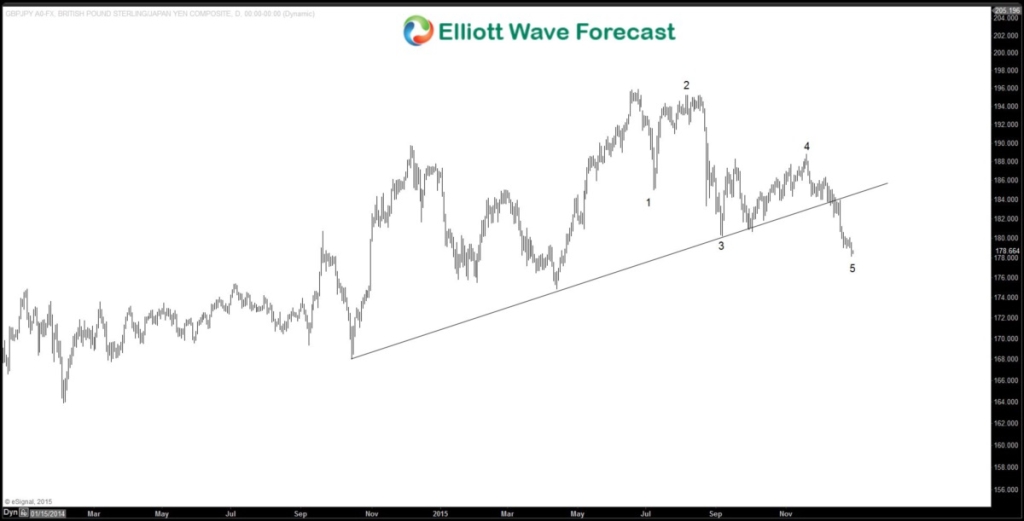 We can see from the chart above that $GBP/JPY has broken the trend line support from October 2014. Furthermore, we can also count 5 swings from 6/2015 peak. A five swing is an incomplete sequence number, as explained in our Elliottwave Swing Structure and Sequence seminar, and suggests that the pair may extend further.

If you enjoy this article, feel free to read other technical articles at our Technical Blogs and also check Chart of The Day. For further information on how to find levels to trade $GBPJPY, $GBPUSD or other forex pairs, indices, and commodities using Elliottwave, take our FREE 14 Day Trial. We provide Elliott Wave chart in 4 different time frames, up to 4 times a day update in 1 hour chart, two live sessions by our expert analysts, 24 hour chat room moderated by our expert analysts, market overview, and much more! With our expert team at your side to provide you with all the timely and accurate analysis, you will never be left in the dark and you can concentrate more on the actual trading and making profits.