At that time, the reason for New Zealand dollar’s strength is attributed to the hawkish statement by RBNZ in their December’s Monetary Policy Statement (MPS) which says that the bank expects to achieve their inflation rate target (1 – 3% target range) with the current interest rate setting. The statement also mentions the high house price inflation in Auckland as the chief worry for RBNZ as it poses financial stability risk. Thus, even though the December’s statement does include a qualifier that “the Bank will reduce rates if circumstances warrant”, market interprets the overall statement as hawkish and conclude RBNZ will likely hold firm the cash rate in the foreseeable future.

Since then, further data came out and the latest quarterly inflation rate was released in January 19, 2016 showing a 0.1% inflation rate yoy in the fourth quarter of 2015. This is the lowest inflation rate since 1999 (in 17 years), and it was below RBNZ’s own forecast for fourth quarter inflation of 0.4 percent. Although fuel price drag is expected, the downside surprise also came from tradables and food price, which both managed to undershoot expectation.

Eight days after the quarterly inflation data was published, in January 28, 2016, RBNZ had a monthly meeting to decide the OCR and they opted to keep the OCR steady at 2.5%. However, Reserve Bank Governor Graeme Wheeler issued a statement that may pave the way for further rate cut this year. Wheeler says that “Headline inflation is expected to increase over 2016, but take longer to reach the target range than previously expected.” He also says “Some further policy easing may be required over the coming year to ensure that future average inflation settles near the middle of the target range”. Wheeler cites uncertainties in global economy, weaker growth in developed world, concerns about China and other emerging markets, as well as continued weak price in oil and commodity to keep global inflation low.

A lower inflation starting point compared to RBNZ’s forecast, and the last leg lower in oil, should push out the normalization of inflation rate to even later period, and it increases the probability that RBNZ will act to cut rate again in their March 9, 2016 meeting. Going into the date of the meeting, speculation of a rate cut may give some pressure to New Zealand Dollar.

There’s a possibility that RBNZ may cut OCR in their next March 9 meeting, and speculation of a rate cut may give pressure to the New Zealand Dollar. A pair to watch is $NZDJPY 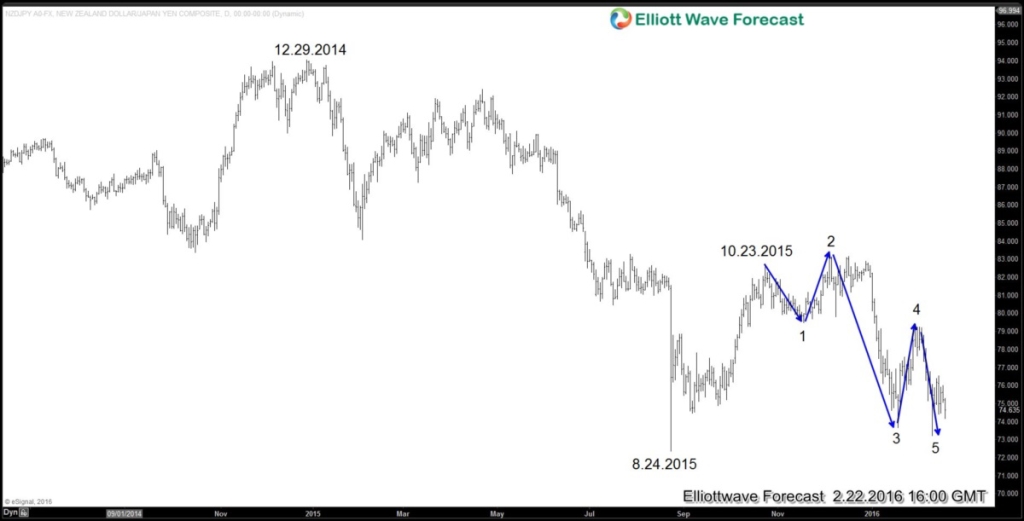 Pair is showing a 5 swing sequence from Oct 23, 2015 peak with first 3 swings unfolding as a FLAT (3-3-5) structure. A five swing is not the same as five impulsive waves, but it is an incomplete sequence, as explained in our Elliottwave Swing Structure and Sequence seminar, and suggests that the pair may extend further. 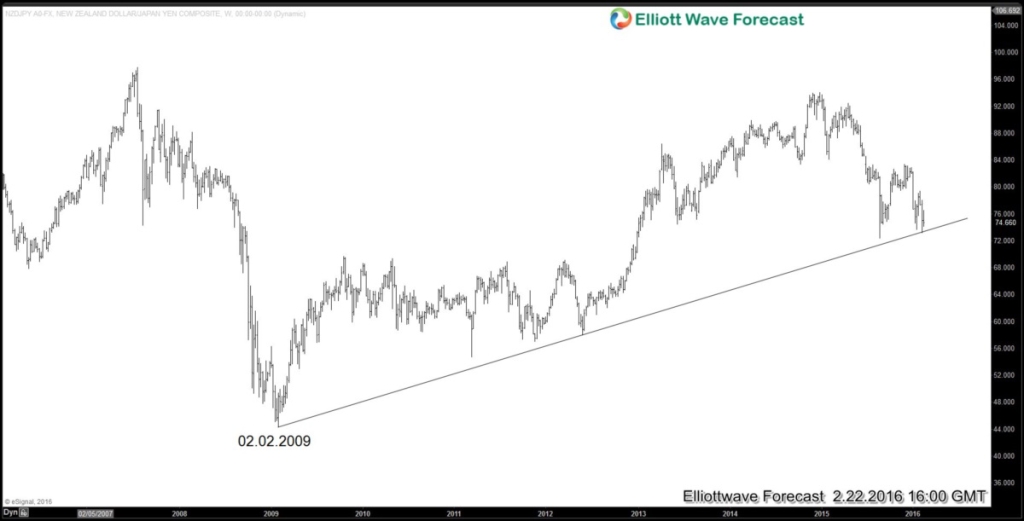 Trading however is not only about knowing the right direction. Even more important is the correct trading execution, that is trading in the right inflection areas with a logical entry and defensive plan. EWF is proud to offer members not only professional-grade Elliottwave forecasting service, but also 24 hour chat room support moderated by our technical analysts and two live sessions everyday to let members get the most updated market cycle.

For further information on how to find inflection areas to trade $NZD/JPY and other $NZD pairs using Elliottwave and our unique trading method of 3-7-11, sign in today for the limited time only FREE 14 Day Trial to see our Hourly, 4 Hour, Daily and Weekly Technical Analysis.