One of the biggest risk events this year – the Euro referendum is finally here and the market will turn its focus on this event in the next few days. The referendum will take place on Thursday June 23rd from 7 am – 10 pm GMT or 2 am – 5 pm EST. All votes is expected to be finalized and counted by Friday 7 am GMT  (2 am EST). We’ve highlighted the risk of the referendum and explain the background of Brexit in our December’s article last year entitled “Will Euro Referendum and Brexit affect GBP?“

Below is the result summary of the various online and phone polls. As can be seen, the poll is too close to call who will come out at the top. 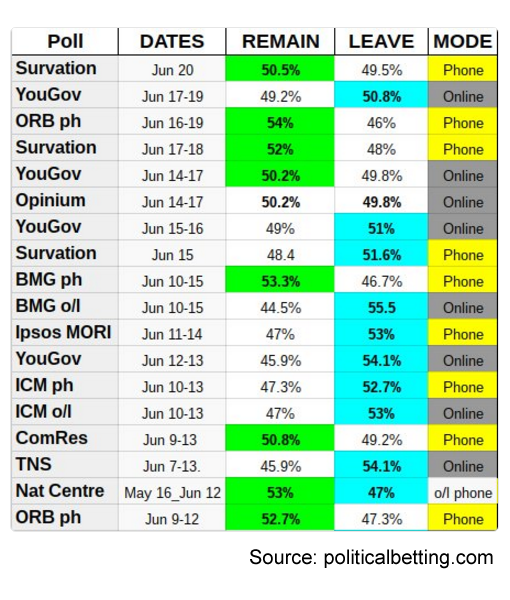 Arguments for Bremain and Brexit

The leading campaigner for Bremain is Prime Minister David Cameron who has made economic security a central element of his argument, saying that Britain would be better off staying as a member in the E.U. due to the access to the largest trading bloc in the world. His view is shared by international economic organizations, such as the Organization for Economic Co-operation and Development (OECD) and the International Monetary Fund (IMF), both of which have suggested that leaving the European Union would damage the UK economy. The OECD warned that leaving the EU would be similar to a British permanent tax revenue.

Bank of England also got involved into the debate and said the possibility that Britain decides to leave the alliance represents the greatest internal risk to UK financial system stability. In ample testimony to lawmakers about the economic relationship in the UK with the EU, BOE governor Mark Carney said the uncertainty surrounding the outcome of the forthcoming referendum on the future of Britain in Europe is already being felt in financial markets, and that a vote in favor of leaving could cause a short term hit to the economy in general. Even European Central Bank President ” Mario Draghi ” has intervened, saying in an interview that Britain should understand that it would lose all the benefits of the single market.

George Soros said in his recent interview with CNBC that ” Brexit would make some people very rich, but most voters considerably poorer, ” Soros gave a warning that a  “leave” vote could lead to a ” Black Friday.” In his view, a Brexit vote can lead to 15 – 20% decline in the value of Poundsterling. While similar thing happened in 1992 which brought down the interest rate and caused a recovery, the same currency devaluation is not healthy this time as interest rates are already near zero.

The Brexit proponents on the other hand also has counter arguments. A group of British economists published a report earlier in April saying that the UK economy can be 2% larger by 2020 and 4% larger after a decade after leaving the EU. These economists said that leaving the bloc can allow the UK to trade with the rest of the world using World Trade Organization’s tariff, instead of the punitive tariff imposed by EU on products produced outside the 28 member states. Gerard Lyons, an economic adviser to the Mayor of London and prominent “Brexit” defender Boris Johnson, also suggests that London will be £120 billion better off outside an unreformed EU. Lyons also challenged Bank of England Governor, Mark Carney, who says London would lose its prestige as a financial center in the case of Brexit. 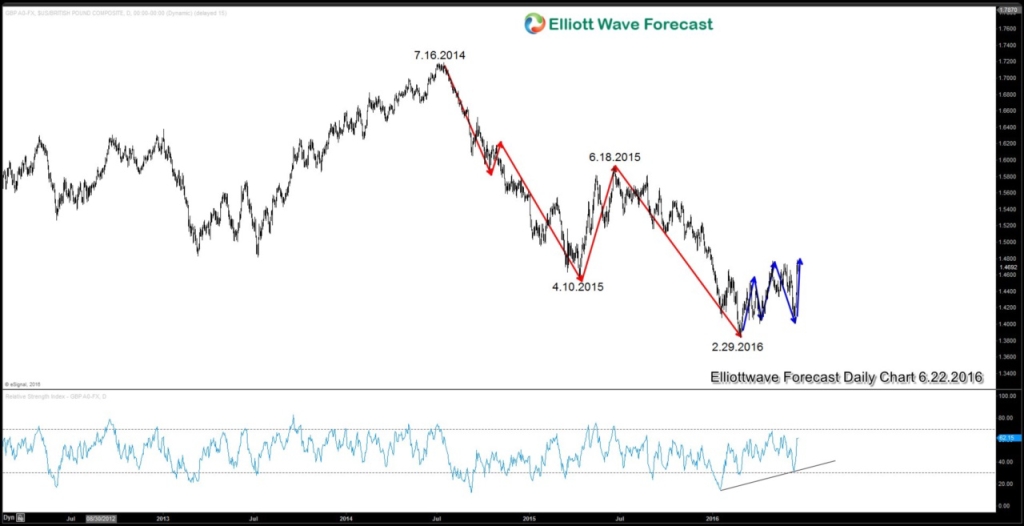 Prepare yourself well with the referendum and take 14 Days Trial to get specific levels and areas to trade $GBPUSD. Also feel free to read other articles at our Technical Blogs and also check Chart of The Day. We provide Elliott Wave chart in 4 different time frames, up to 4 times a day update in 1 hour chart, two live sessions by our expert analysts, 24 hour chat room moderated by our expert analysts, market overview, and much more! With our expert team at your side to provide you with all the timely and accurate analysis, you will never be left in the dark and you can concentrate more on the actual trading and making profits.