The market got off guard with the outcome of the UK referendum to leave European Union. One of the biggest casualties is Poundsterling which tumbled 8% on Friday last week, the biggest single day drop on record. The currency hit 31 year low and momentum and also technicals suggest more weakness is likely.

Global equities, as measured by S&P’s Global Broad Market Index lost $2.08 trillion. This amount surpassed the previous one-day record of $1.9 trillion loss set on Sept 29, 2008, which happened on the days following the Lehman Brother’s collapse. Interestingly, whether you believe in coincidence or design, the time between the two dates is 7 years 7 months 7 weeks and 7 days as shown on the result below

Market reaction also saw safe haven flow go into Yen, although both Yen pairs and global indices have since erased some of the Brexit losses in recent days. However, once correction is done, further safe haven flow into Yen pairs and further indices selloff can’t be ruled out. The BOJ has indicated that they may intervene in the FX market if the slide becomes too fast, but without a coordinated effort by other major central banks, a stand-alone intervention may not be able to stop the safe haven flow.

Another notable reaction comes from the Precious Metal market where Gold rallied 4.7% on Friday. This year Gold has rallied 25%, the most in 3 decades, as investors seek to protect their wealth. The Brexit outcome may further increase demand for safe haven assets such as Gold due to global growth concerns. Chart below from SRSBrocoReport shows the first half of 2016 Global Gold ETF and Fund Net flow is comparable to that in 2009 during the financial crisis 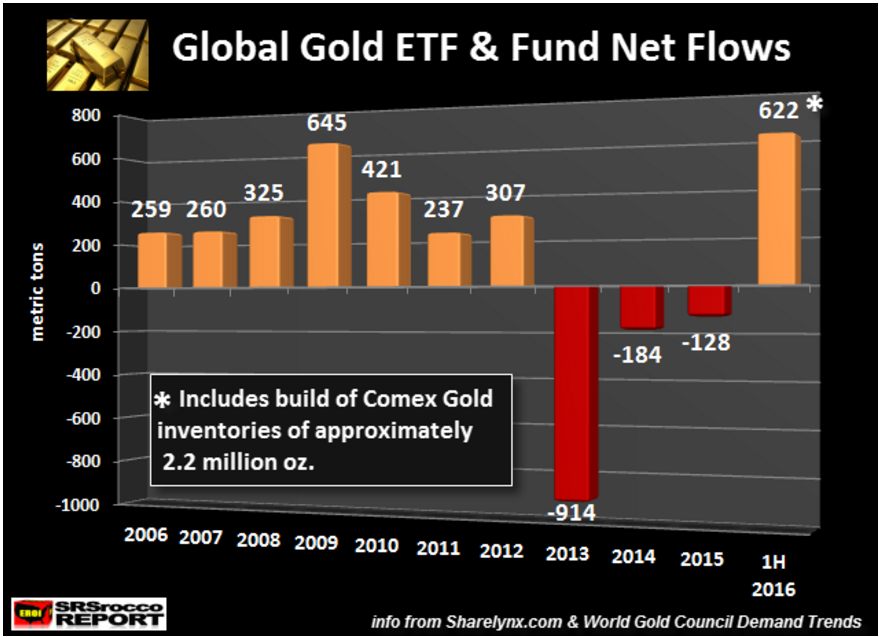 Brexit contagion without doubts can also spread outside the U.K into Europan Union countries and embolden other EU skeptic parties. A survey by Ipsos Public Affairs below suggests that if UK left the European Union, 48% of the poll respondents said that other EU country members will follow with exit referendums, compared to 18% who said it should not have contagion effect. 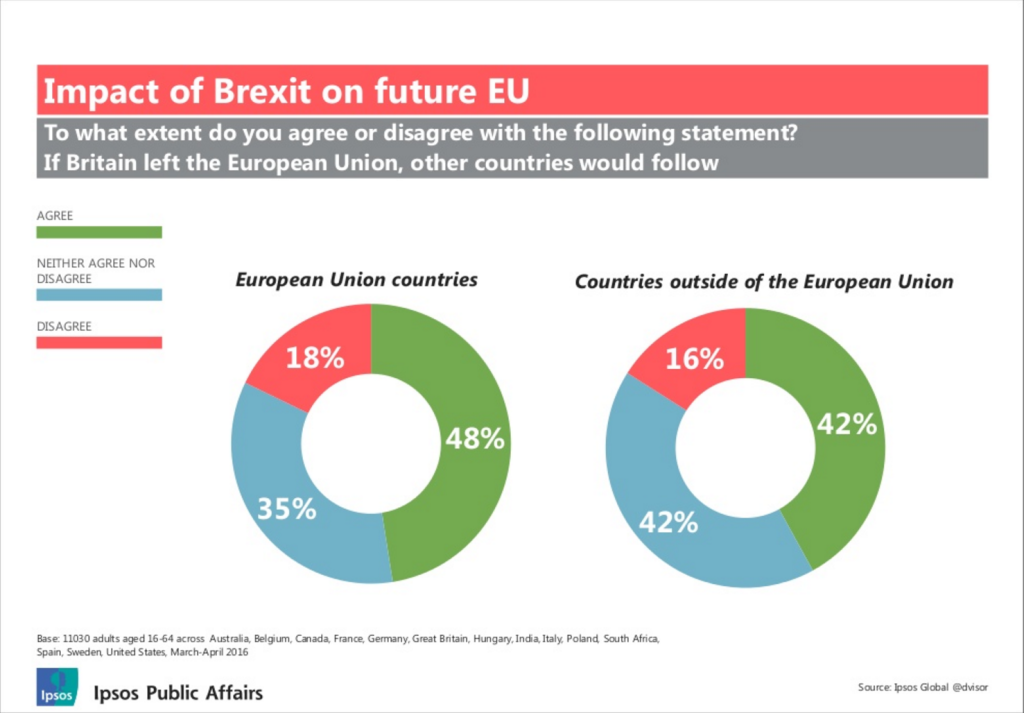 In the chart below, the same survey asked questions to the poll respondends which countries likely want to hold a similar Euro referendum and the probability of these countries vote to leave the EU 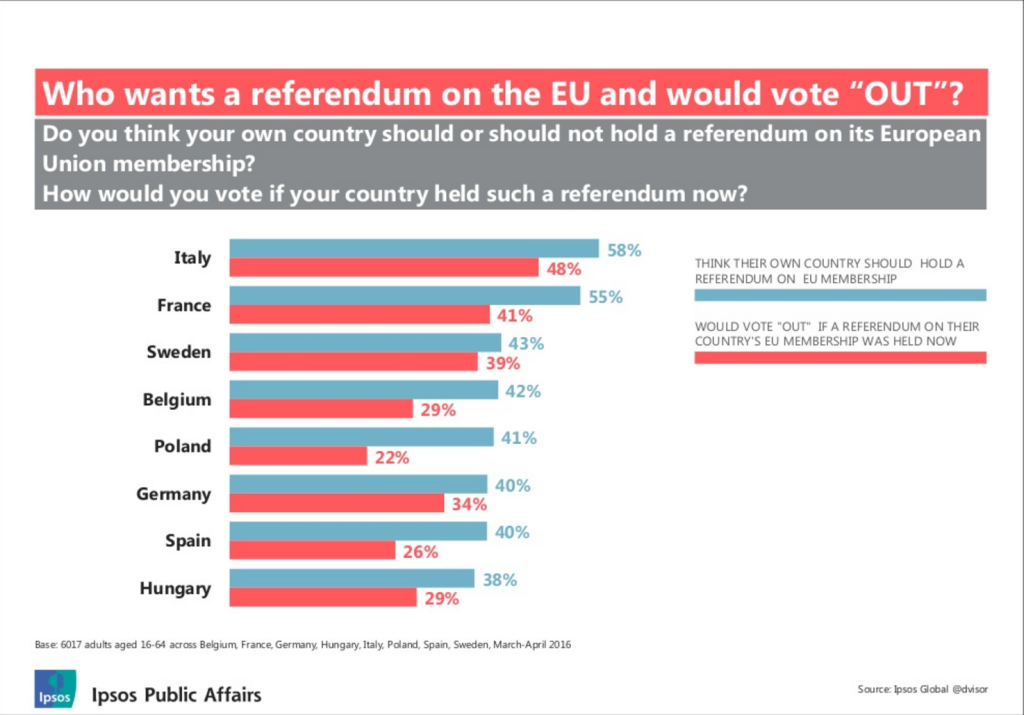 Post the Brexit refrendum, rating agencies cut forecasts for U.K GDP growth. Fitch cut UK GDP growth in 2017 and 2018 by half to 0.9%. The agency also cut U.K’s credit rating to AA from AA+. Standard and Poor, the last major rating agency to give the UK the highest rating, cut U.K’s triple AAA rating by two notch. Due to falling investment as a result of Brexit, U.K may go into technical recession for a few quarters, starting as soon as Q3 this year. The EU as a very significant trading partner to the UK likely will also experience lower GDP growth by 0.3 – 0.5% below current forecast of 1.6% in 2016 and 2017.

The Brexit decision hits the UK economy at a difficult time when the country runs 7% Current Account (C/A) deficit in 1Q 2016. With a period of great uncertainty about UK and its trading relationships, it will only make the C/A deficit worse. The UK C/A deficit is one of the worst in G10 and EM countries, next to Columbia like the chart below shows 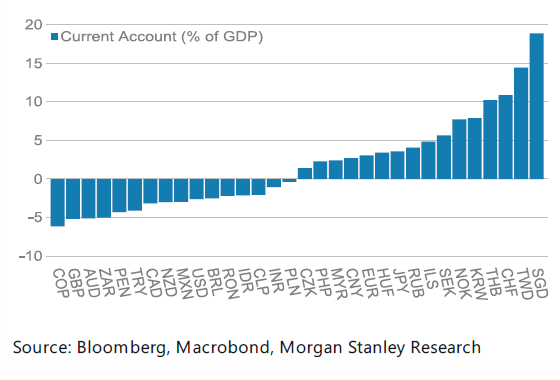 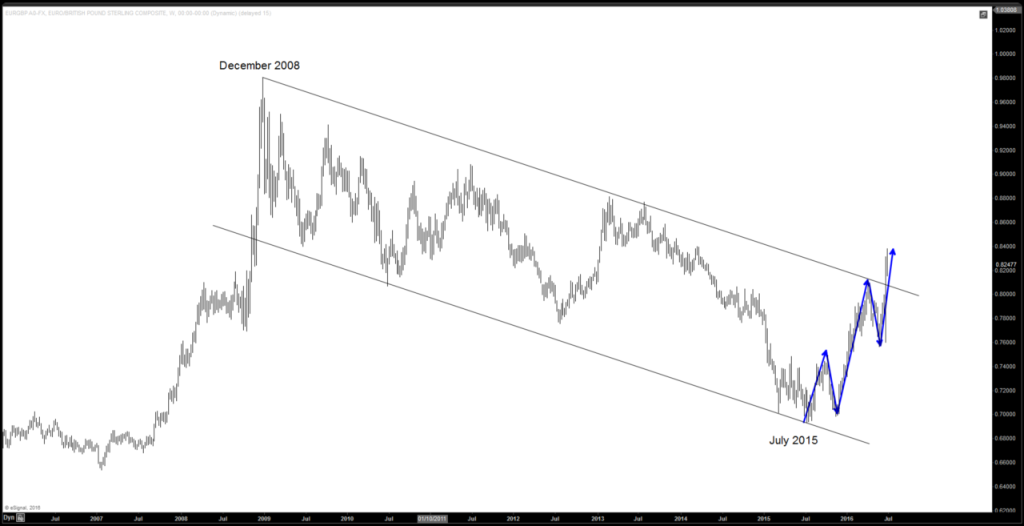 Take our FREE 14 Day Trial to find levels to trade $GBPUSD, $EURGBP, and other forex, indices, and commodities using Elliottwave technique. We provide Elliott Wave chart in 4 different time frames, up to 4 times a day update in 1 hour chart, two live sessions by our expert analysts, 24 hour chat room moderated by our expert analysts, market overview, and much more!