In our previous Jan 19 article “Where is Euro going next“, we explain the negative correlation between asset volatility and the Euro. When stock market declines, the Euro dollar goes up, and vice versa. The table below from Morgan Stanley confirms this inverse relationship. We can see that other than the period between 2007 – 2009 and the period in 2011, this negative correlation between the Euro and risky assets remains true. 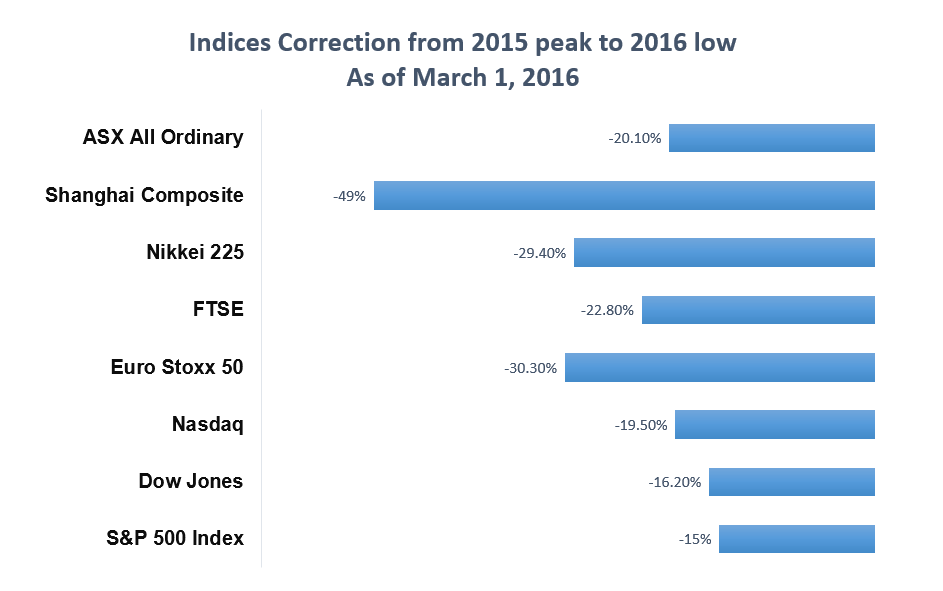 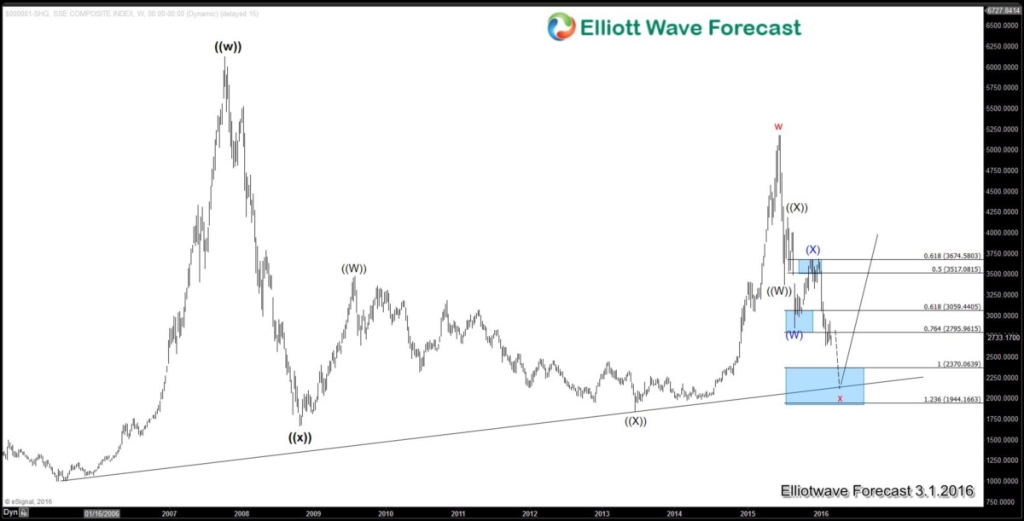 Weekly chart of Shanghai Composite Index above is showing an incomplete 5 swing sequence from 2015 peak and more downside is expected at least towards 1944 – 2370 area in the higher degree time frame. 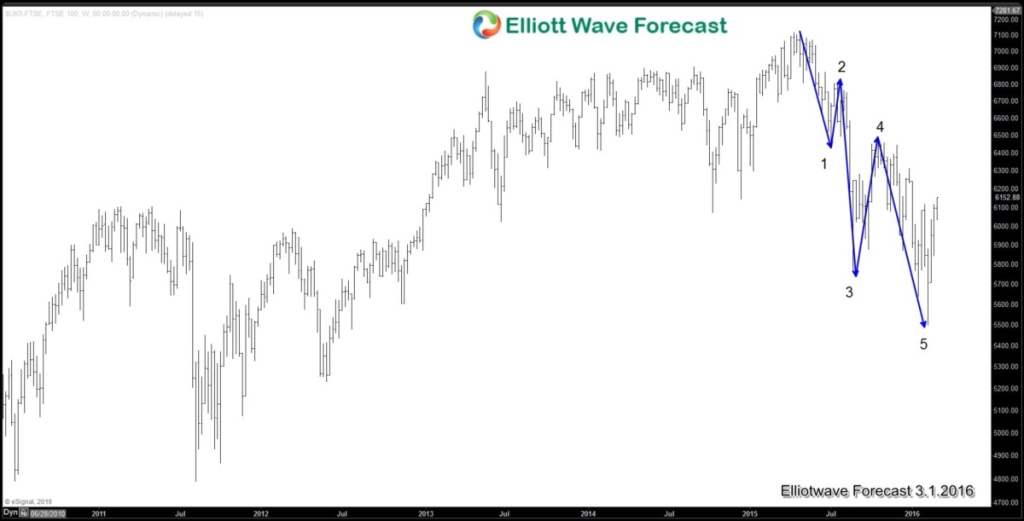 The weekly FTSE chart above also is showing a 5 swing sequence. Please note 5 swing is a sequence count, and it’s not Elliottwave 5 impulse waves, as explained in our Elliottwave Swing Structure and Sequence seminar.

In December last year, ECB disappointed the market by merely cutting deposit rate rate by 25 bps and extending QE program by six months until March 2017. Market was expecting the ECB to expand the Quantitative Easing programme, but ECB did not deliver. The Euro rallied strongly as a reaction at that time. Since then, headline inflation in the Euro area has continued to dip lower, and latest Euro inflation rate report in February 29 shows a -0.2% yoy. As expected, the energy component is the major drag with 8% fall. However, Euro core rate (excluding energy, food, alcohol, and tobacco) also slowed down to 0.7% compared to 1% in the previous month.

This number is far below ECB’s 2% target and gives pressure to ECB to act more in the next coming meeting at March 10. ECB President Mario Draghi has said at the bank’s latest monetary policy meeting in January that ECB will review and possibly reconsider the stimulus program at the March’s meeting. He also said that ECB will not hesitate to act if necessary. Market interprets his statement that more easing is likely in March and currently market has somewhat priced in a further deposit rate cut by ECB, as evidenced by the steady decline in Euro dollar since February. The recent stabilization of risk asset and rally in indices in some ways also reflect the expectation that ECB might ease further.

We have seen that cutting rate (e.g. BOJ going to negative rate in January) does not really push the currency lower. In the case of BOJ, despite cutting deposit rate into negative territory, the Yen selloff is a temporary reaction and it rallied sharply afterwards. Thus, even if ECB cut deposit rate by 25 bps at the next meeting, then using the example of BOJ, Euro is likely not going to go lower significantly.

The big unknown however is whether ECB will expand the QE programme at the March’s meeting. Germany has consistently opposed the idea of expanding the QE programme, and while ECB might be willing to expand, they currently face the problem of limited eligible bonds to buy. The ECB has a rule that it can’t buy any bond that yields less than its current deposit rate, which is minus 0.3%. Using this rule, 50% of German’s debt is no longer eligible for the ECB’s QE progamme as they fall below the -0.3% yields. German two-year yields for example touched -0.57% in Feb 29, thus making it ineligible under the ECB’s QE programme.

Should the ECB decide NOT to expand the QE program at the coming March meeting, then a similar reaction (Euro dollar rally) may happen like the one we saw in December last year. Due to the inverse correlation with indices, then without QE expansion, it can also mean a turning point in Indices for the next leg lower. Chart below shows reaction of three Euro pairs in December’s meeting when ECB decided not to expand the QE programme. 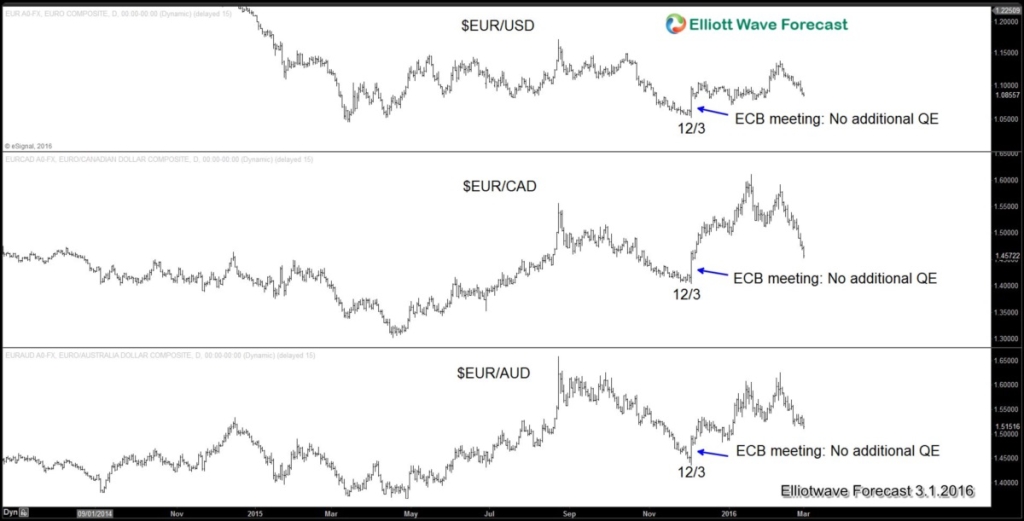 For further information on how to find inflection areas to trade $EURUSD, Indices and other $EUR pairs using Elliottwave and our unique trading method of 3-7-11, sign in today for the limited time only FREE 14 Day Trial to see our Hourly, 4 Hour, Daily and Weekly Technical Analysis.