The Euro dollar (EURUSD) has been trading sideways since March 2015 before breaking into a new low in late December 2016. The single currency remains heavy technically and the underlying political and economic risks in the Euro-area in 2017 could provide a cap for any strength in the currency. The Euro zone has survived various crises since 2008 which cast doubt to the existence of the 19-nation bloc. The crises stem from its fractured economy, bond market, banking system, and Greece. The biggest test however may come this year with Euro-area elections in France, Germany, and the Netherlands.

The big concern is the break up of the European Union if more right wing parties like Marine Le Pen in France win the election. The rise of populism sweeping the Western world with Brexit vote last summer and Trump’s election last November further gives momentum for Le Pen’s Front National (FN) party. Le Pen’s policies are similar to Trump’s: She is a fierce critic of open borders and free trade.  She also believes in nationalism and economic protectionism, promising to pull France out of the European Union.

If she wins the French presidency, investors fear it could be the beginning of the end in European Union experiment. French elections happen in two rounds, and recent polls show Le Pen winning the first round of voting, which is scheduled on April 23, but losing the second round voting in May 7. Despite most polls suggesting that Front National will lose the election, it should be noted that polls haven been wrong recently, including polls about the Brexit referendum and U.S presidential elections.

With ECB signalling it is on hold with bonds purchase for now, the Euro-area politics is likely going to become a key driver of the EUR in the short term. Thus far, concerns about the political risk in France is beginning to get priced in with the widening spread in France-Germany bond yields. The French presidential election remains a key risk for significant EUR downside. Thus, the $EURUSD may trade sideways to lower in the next few months, even more so considering that the U.S Federal Reserve can potentially raise the overnight cash rate in March’s meeting. Strength in EURUSD thus may be limited until we get more clarity about the situation. 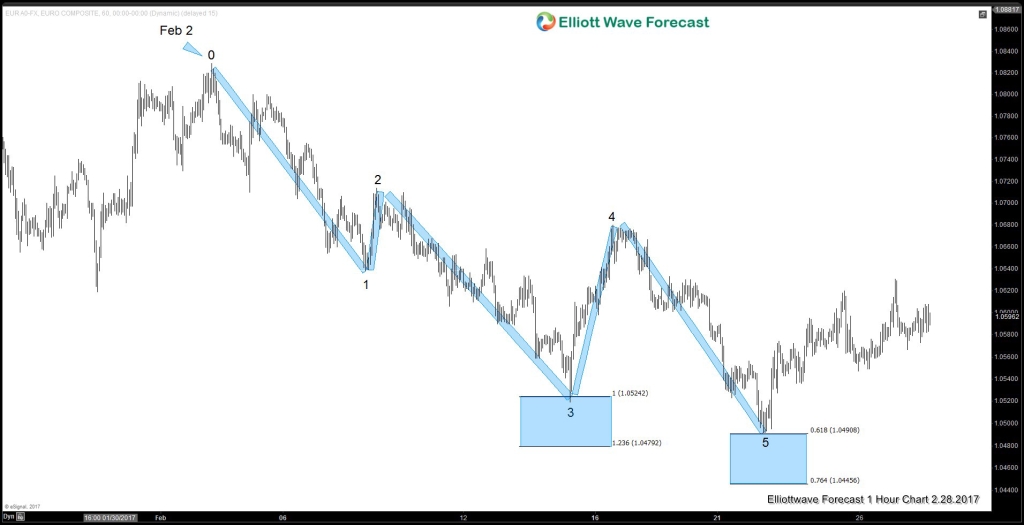 Short term Elliottwave structure from Feb 2 peak (1.0828) in EURUSD is showing a 5 swing sequence, favoring more downside. Please note that the number on the chart denotes a swing count and not suggesting it’s a 5 waves impulse. The decline from Feb 2 peak is not a 5 waves impulse, but we can count 5 swing, and thus we refer it as a 5 swing sequence.

Ideally pair now stays below swing #4 at 1.068 for further weakness in the pair. However, more importantly pair should stay below Feb 2 peak if it’s going to continue to see further weakness. If Feb 2 pivot fails, bearish sequence will be invalidated. In our Live Trading Room, we sold EURUSD at 1.0665 and currently have a risk free position. Our trading technique of 3-7-11 allows us to enter trade at a high probability inflection area, giving us a good chance to get into a risk free trade situation quickly.

If you enjoyed this article, feel free to try our –> Free 14 day trial . We provide Elliott Wave charts in 4 different time frames, up to 4 times a day update in 1 hour chart, live trading room, two live sessions by our expert analysts, 24 hour chat room moderated by our expert analysts, market overview, and much more! Try us out for Free 14 day trial & starts making profits with us.