Yesterday the UK has struck a deal with the EU to the Brexit transition period.  The transition period is the 21 month period which starts from 29 March 2019 (official Brexit day) to 31 December 2020. UK Prime Minister Theresa May likes to call this period an implementation phase. This period allows businesses time to prepare for new arrangement before the eventual permanent arrangements between UK-EU relations kick in. During this transition period, the UK will continue to enjoy the single market and custom union. However, The British government needs to concede defeats in a series of demands. The UK will lose decision making ability during this period and follow EU rules. In addition, the UK also concedes on its demand on the rights of expatriate citizens and emergency backstop option on Irish border.

In the issue of the right of expatriate citizens, British citizens and European citizens arriving in the UK during the transition period will have the same rights to those who arrive before Brexit. The UK also agrees on the emergency “backstop” option to avoid hard border in Ireland. This emergency option says that if Britain and the EU could not find a solution to avoid custom barriers and other mechanisms which renew tensions in Northern Ireland, the province should follow EU economic rules even if the rest of the UK does not.

Brexit secretary David Davis said the agreement in transition period should provide considerable assurance to individuals and companies affected by Brexit. Mr. Davis also hoped that with this breakthrough, negotiations on the UK’s future relationship with the EU, including a free trade arrangement, can start as soon as possible. The aim is for a deal to be agreed in the Autumn to allow time for EU member states and the UK Parliament to ratify it before Brexit in March 2019. Prime Minister’s Theresa May’s priority has been to secure a political accord to ease the concern of businesses operating in UK.  To this end, the breakthrough in the negotiation has achieved the purpose. This accord is now likely to be supported by the leaders of the 27 EU member states at the summit on Friday.

The financial markets love this agreement. Poundsterling receives a boost against other major currencies. GBPUSD rallies 1% against to $1.408 while EURGBP drops 0.8% 0.8746. 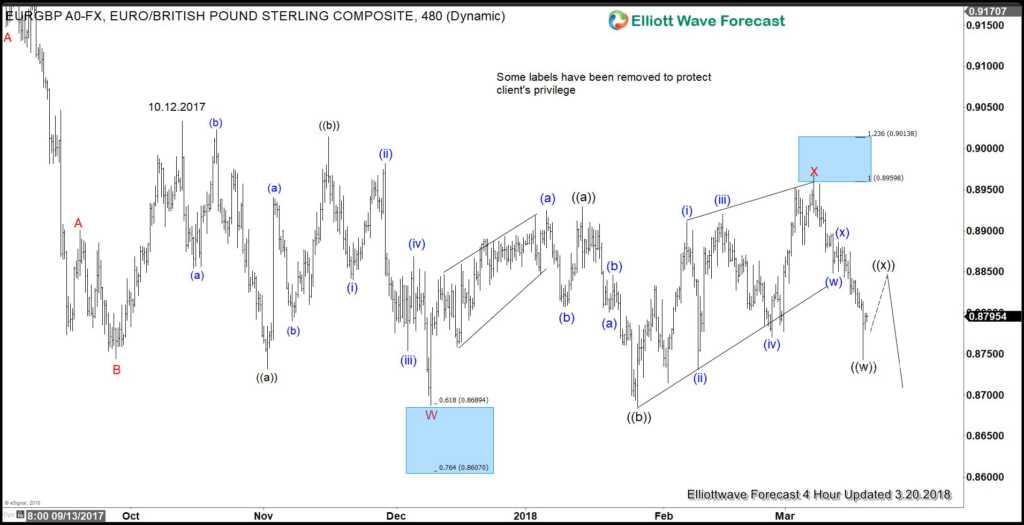 After ending Minor wave X at the extreme area (blue box), pair accelerated the move lower upon the news of successful Brexit transition period negotiation. Now while bounces stay below 0.8968, pair should extend lower in Minor wave Y. However, to add validity to this view, pair needs to break below 1.25.2018 low (0.8685).