Bank of Japan (BOJ) did not take any further easing action on Thursday (April 28) monetary policy meeting, sending Yen soaring more than 3% against the U.S. dollar and Nikkei tumbling 3.6%. Coming into the meeting, expectation by market participants was very high that BOJ would take further actions considering that Yen has strengthened for much of 2016, hitting the strongest level in 18 months in April. Strong Yen is not welcomed by BOJ as it is delaying BOJ’s goal to reach 2% inflation target.

Compounding the woe is Japan’s CPI data released earlier in Wednesday which miss the expectation badly (-0.1% yoy actual vs 0.3% yoy expected). This is the first time that Japan’s CPI fell since May 2013, around the same time that BOJ introduced the first massive $1.4 trillion QQE (Quantitative and Qualitative Easing). Further action to boost the QQE program in 2014 and negative interest rate in Feb 2016 all seem to fail to improve the CPI outlook.

The inaction by BOJ thus surprises market participants and brings forth the questions whether BOJ has run out of options. Indeed, past IMF report has suggested that BOJ can’t continue to buy government bonds as they may run out of willing sellers soon. In the interview after the policy decision, Mr. Kuroda said that BOJ hasn’t run out of ways to ease policy further, but he didn’t mention additional government bonds purchase, rather he talked about many ways to push down the negative rate. With the next BOJ meeting not until June, there is no fundamental catalyst that may stop the Yen from strengthening in the meantime. Market participants have also pointed out that Japan’s current-account surplus increase the demand for Yen, thus may cause the Yen to appreciate. 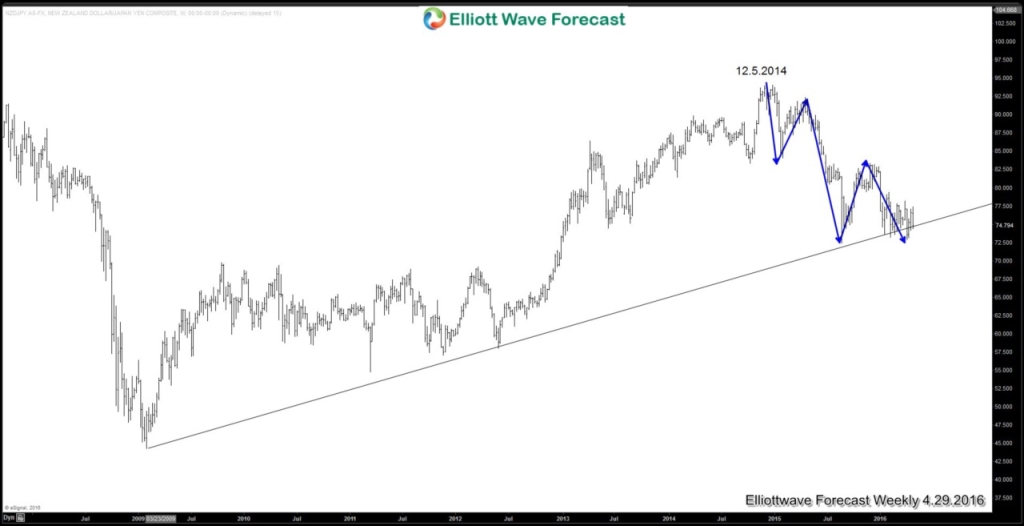 NZDJPY weekly chart above showed a promise a few weeks ago by breaking below the weekly trend line. Unfortunately, there was no follow through and the pair closed back above the trend line. However, the pair is still showing a five swing sequence from 12.15.2014 peak and thus further extension to the downside is ideal to finish a 7 swing sequence. Presently the same weekly trend line is challenged again and with the BOJ news event risk behind, another convincing break below the weekly support line this time may see the pair extending lower.

Yen pairs have been supported in the past few weeks due to the speculation that BOJ might take some actions to ease monetary policy in their April 28’s monetary policy meeting. BOJ opted to take no action instead. With no further BOJ meeting until next June and the news event risk behind, Yen may now continue to strengthen in the meantime. NZDJPY is showing a 5 swing sequence from 12.15.2014 peak and thus another swing lower is ideal. With the pair currently sitting at weekly support again, a convincing break below it may suggest more extension to the downside.

If you enjoy this article, feel free to read other technical articles at our Technical Blogs and also check Chart of The Day. For further information on how to find levels to trade $NZDJPY, $USDJPY or other forex pairs, indices, and commodities using Elliottwave, take our FREE 14 Day Trial. We provide Elliott Wave chart in 4 different time frames, up to 4 times a day update in 1 hour chart, two live sessions by our expert analysts, 24 hour chat room moderated by our expert analysts, market overview, and much more! With our expert team at your side to provide you with all the timely and accurate analysis, you will never be left in the dark and you can concentrate more on the actual trading and making profits.