Canada’s Dollar slumped last Friday due to worse-than-expected gross domestic product data. Canada’s economy practically grinds to a halt at the end of 2018. Real GDP grew by just 0.1 percent in the fourth quarter of 2018. This equals to 0.4% annualized rate, which is significantly lower than analyst expectations of around 1%. This is the worst quarterly performance in two and a half years. For the full year, Canada’s economy grew by 1.8%, compared to the U.S. which grew by 2.9%. In December, Canada’s economy actually contracted by 0.1%. 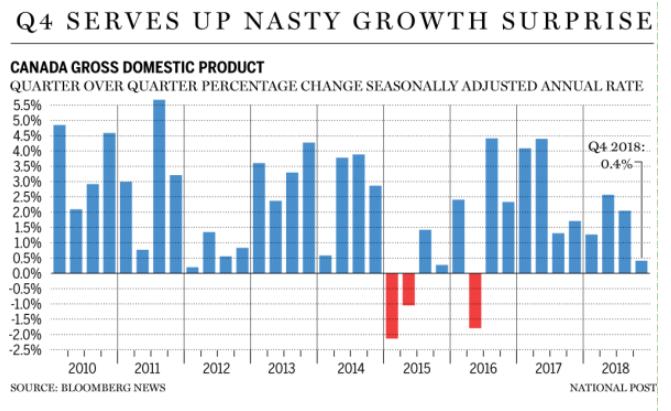 Statistics of Canada says the decline in crude oil prices hit the exports during the period, which contributes to reduce Canada’s quarterly growth. The Loonie responded by weakening more than a full cent to 1.33 against the US Dollar. The Pound-to-Canadian-Dollar rallied more than 2 full cents as Poundsterling continues to be G10’s best performing currency in 2019. Following the release, the market has started to reprice the odds of a Bank of Canada’s rate hike lower.  The report should reinforce the expectation of a prolonged rate hike pause by Bank of Canada.

Keep in mind that market is dynamic and the structure might have changed since this article is written. Follow the next short term chart update as well as trading idea for this pair and others inside member area. Non-members can try our service 14 days for FREE here –> 14 days FREE Trial