A string of interview with Federal Reserve members in the past two weeks suggest that interest rate hike is imminent. Last Friday, Federal Reserve Chair Janet Yellen also confirmed that the Fed should “probably” raise interest rate “in the coming months” if economic growth picks up and the labour market continues to improve. The U.S. Dollar surged higher after Ms. Yellen’s speech. Interest rate futures currently shows the probability of a rate hike in June is 28%, July is 61%, and 80% before the end of the year. Short term, U.S. Dollar may be relatively supported and if this Friday’s job data beats expectation, U.S. Dollar may rally further as rate hike expectation may increase further with improved labor data.

However, Yellen’s remark about raising rate “in the coming months” instead of “soon” may in fact suggest a higher likelihood of a rate hike in July or August. Since the Fed’s June meeting is only 1 week ahead of U.K.’s referendum and given how cautious the Fed has been, a June rate hike remains less likely than later months.

Australian Dollar and other major currencies retreated last week against U.S. Dollar due to the increased expectation of a rate hike. Last week, Australia’s private capital expenditure came out and the number slumped more than expected at -5.2% qoq in Q1 2016. This number however is not entirely bad as it is backward looking. Most of the Q1 capex drop came from the mining sector. Non-mining capex rose by 0.4%. More importantly however, future investment plans by businesses increase for 2016-17 by 6.3 per cent. Today, building approvals data is released showing a rise of 3%, beating expectation of -3.1% by a wide margin. This piece of data is a good gauge for future construction activity and thus also future hiring and employment.

This Wednesday, another important piece of economic data, Australia’s Q1 GDP, will be released. Expectation is for the data to remain relatively robust at 0.6% qoq and may grow 2.6% yoy. If the data meets the expectation, this growth rate is still higher than most developed markets as the chart below shows: 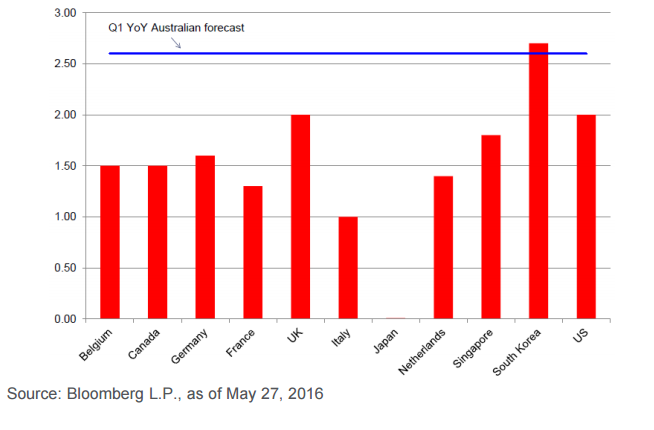 With Australia’s data continue to stabilize and improve, RBA is unlikely to cut rates again in June, although the central bank may cut rates further later in the year. Australia Dollar’s interest rate future now is pricing in only a 10% chance of a rate cut in June.

AUD cross pairs analysis suggest that Australian Dollar may be in the stabilization process in the short term. 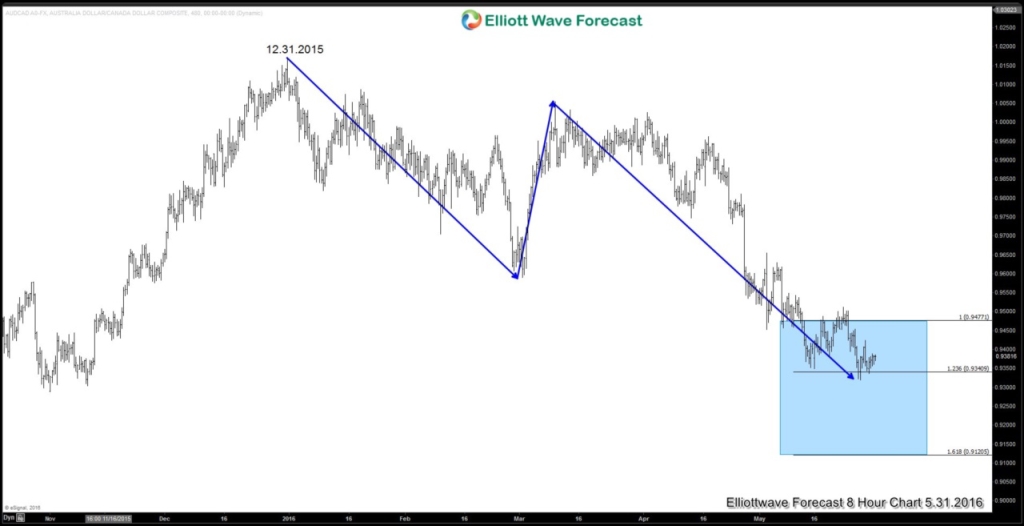 From the chart above, $AUDCAD moved lower in 3 swing from 12.31.2015 peak and the pair has reached extreme area and is expected to end 12.31 cycle soon and bounce at least in 3 waves. This suggests that $AUD can be stabilizing 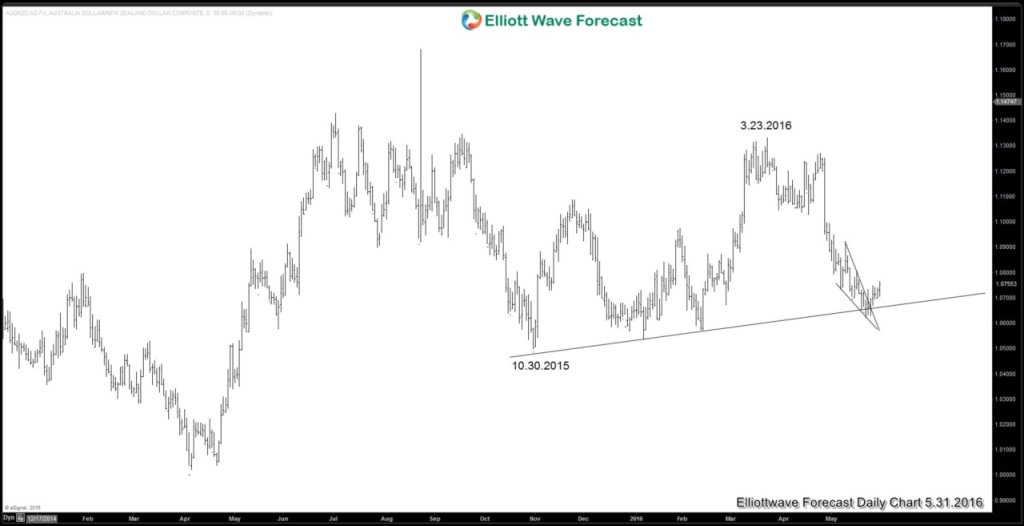 From the chart above, $AUDNZD bounced off a channel support from 10.30.2015 low. The pair looks to have broken out of what looks to be a wedge. The short term structure suggests that the pair may have ended the cycle from 3.23.2016 peak and can at least bounce in 3 waves to correct this cycle.

A hawkish Fed increases rate hike expectation in the coming months and may support U.S. Dollar in the short term. If the U.S. job data this Friday is coming out good, more U.S. Dollar strength may be in store. However, the prospect of a rate hike in June remains smaller compared to later months due to the proximity between the Fed’s June meeting and U.K. referendum (Fed’s meeting is 1 week earlier).

Recent economic data from Australia has improved and with Australian Dollar recently has already dropped 8%, the pair may start to gradually stabilize. Furthermore, the RBA is unlikely to cut anytime soon, although they may still cut again later this year. Technical analysis on the Australian Dollar crosses suggest that Australian Dollar may stabilize soon.

Take our FREE 14 Day Trial if you are interested to learn more and find inflection area to trade $AUDUSD, $AUDNZD, $AUDCAD, or other forex, indices, and commodities using Elliottwave. We provide Elliott Wave chart in 4 different time frames, up to 4 times a day update in 1 hour chart, two live sessions by our expert analysts, 24 hour chat room moderated by our expert analysts, market overview, and much more! With our expert team at your side to provide you with all the timely and accurate analysis, you will never be left in the dark and you can concentrate more on the actual trading and making profits.