In this technical blog, we are going to take a look at the past performance of 10 Year T-Note Futures ticker symbol: $ZN_F 1-Hour Elliott wave Charts that we presented to our members. In which, the rally from November 11, 2019 low ( $127’31) showed a 5 wave impulse structure. Thus suggested that the structure is incomplete to the upside & the $ZN_F should do another 5 waves rally to complete the Elliott Wave zigzag structure. We will explain the Elliott wave structure below: 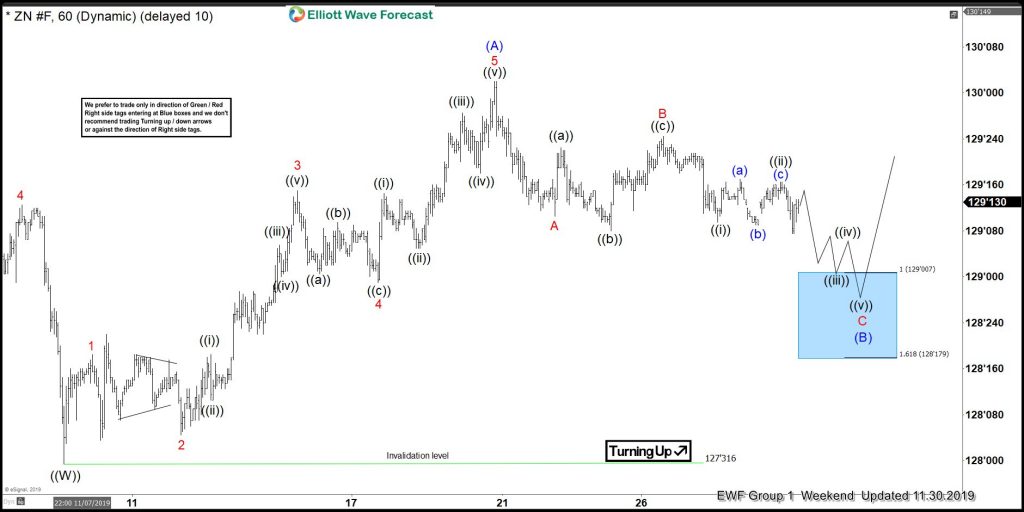 Here’s 1 hour Elliott Wave Chart from 12/04/2019 London update, in which $ZN_F managed to reach the blue box area i.e $129-$128’17 100%-161.8% Fibonacci extension area of A-B. And got the reaction higher as expected in lesser degree 5 waves impulse structure. Please note that after collecting further data we changed the structure of the wave (B) pullback into a double three structure instead of being zigzag.

If you are looking for real-time analysis in $ZN_F along with other Forex pairs & world indices along with majors then join us with New Year Promotion to Avail 2-1 month promotion for the latest updates & price action.

Success in trading requires proper risk and money management as well as an understanding of Elliott Wave theory, cycle analysis, and correlation. We have developed a very good trading strategy that defines the entry. Stop loss and take profit levels with high accuracy and allows you to take a risk-free position, shortly after taking it by protecting your wallet. If you want to learn all about it and become a professional trader. Then join our service by taking discounts with New Year’s Promotion.