Hello fellow traders. In this technical blog we’re going to take a quick look at the Elliott Wave charts of USDJPY published in members area of the website. As our members know, USDJPY has incomplete bearish sequences in the cycle from the 04/24 peak. That makes the pair bearish against the 109.33 high.  Consequently, we advised members to avoid buying the pair and keep favoring the short side.

Recently the pair made Running Flat against the mentioned peak. Before we take a look at the real market example of Running Flat, let’s explain the pattern in a few words.

Elliott Wave Expanded Flat is a 3 wave corrective pattern which can be seen in the market nowadays. Inner subdivision is labeled as A,B,C , with inner 3,3,5 structure. Waves A and B have forms of corrective structures like zigzag, flat, double three or triple three. Third wave C is always 5 waves structure, either motive impulse or ending diagonal pattern. It’s important to notice that in Running Flat Pattern wave B completes below the start point of wave A, and wave C ends below the ending point of wave A. These kind of movements make the Running Flats.  Running FLATS Patterns are also tricky to trade.

At the graphic below, we can see what Running Flat structure looks like. 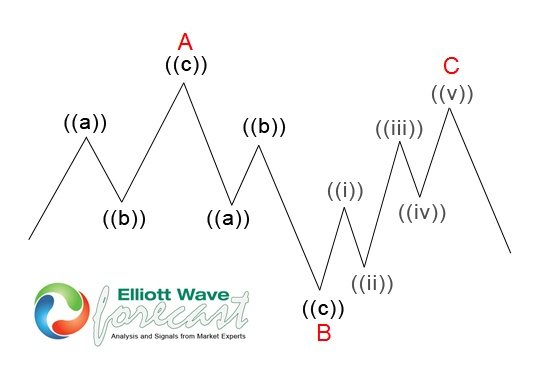 At the chart below we can see classic example of Elliott Wave Flat Pattern in forming. We got 3 waves up in wave (a) blue and then another 3 waves down in (b) which broke starting point of wave (a).  Currently we are getting strong rally with impulsive structure in (c) leg up. At this stage we don’t know yet is the pattern going to end up as Expanded or Running Flat, as the price can easily broke ending point of wave (a). 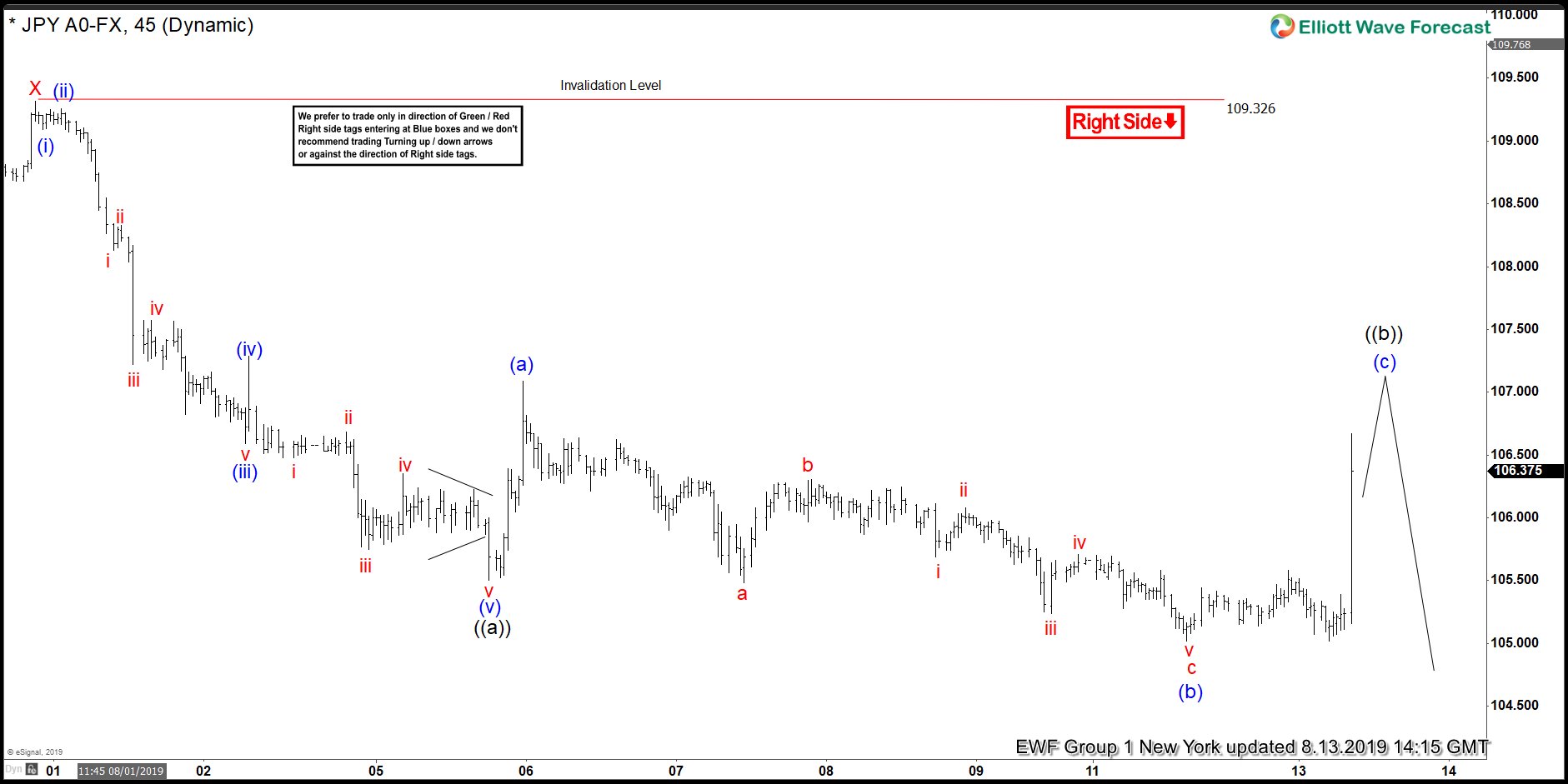 Current view suggests recovery against the 109.29 peak is completed at 106.98 high as wave ((b)) black.  As wave (c) of Flat ended below ending point of wave (a), wave ((b)) is counted completed as Running Flat structure. As far as the price stays below that level we expect further weakness in the pair. Now we need to see break below (b) blue low to confirm next leg down is in progress. 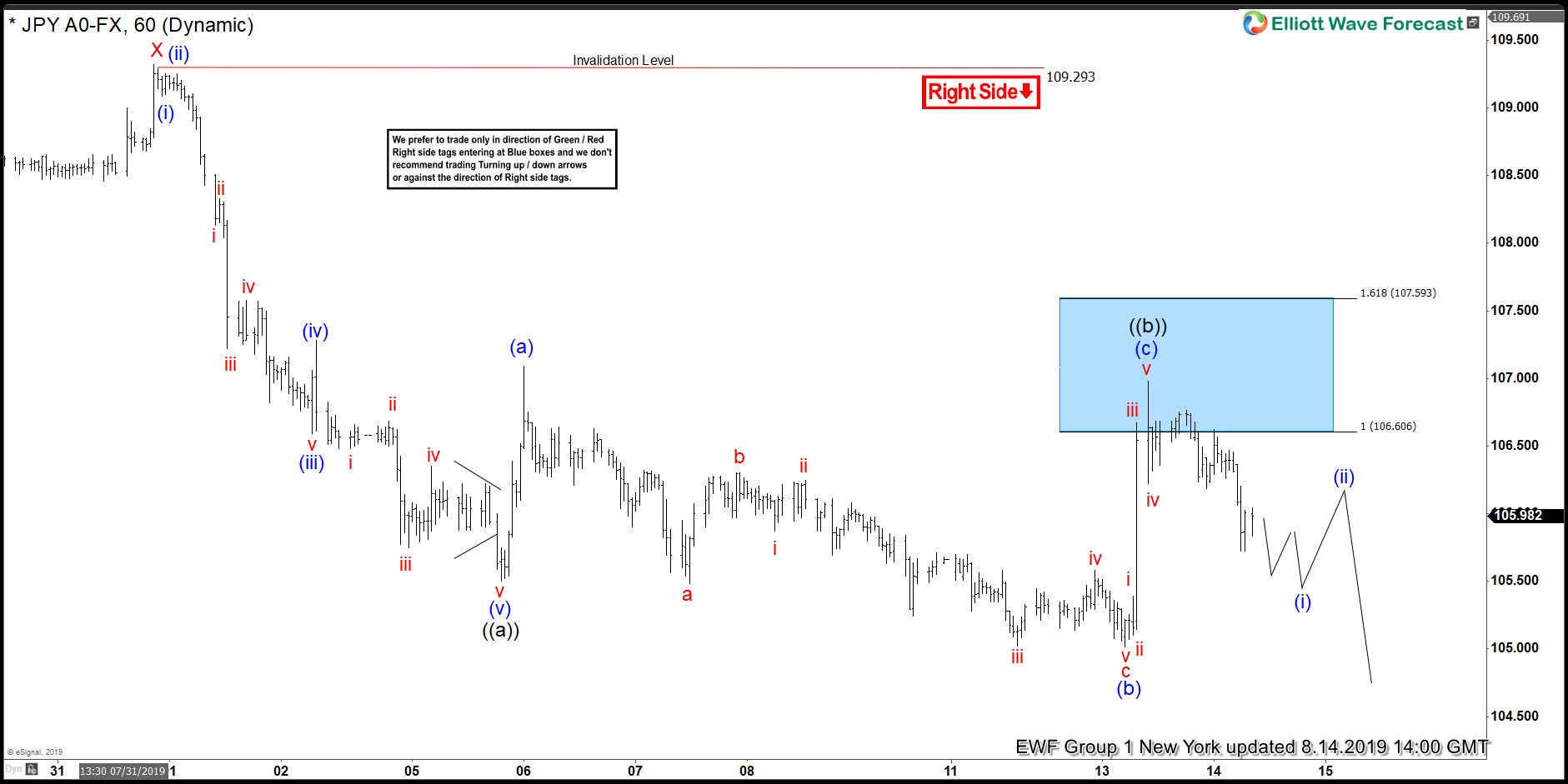 Currently USDJPY is doing short term recovery against the 106.98 peak, which also can be unfolding as Flat Structure. We got 3 waves up in a red, then 3 waves down in b red, currently still forming c red as 5 waves structure. If c red completes below a red high that would be another running flat. Anyway, as far as the price stays below 106.98 peak we expect further weakness in the pair.

Last short term high at 107  held nicely and we got decline as expected. Short term wave ((ii)) recovery also ended as running flat as wave (c) completed below ending point of wave (a). Now as far as the price stays below wave (ii) blue high, and more importantly 107.01 pivot holds, we can be doing next leg down within incomplete cycle. Otherwise break above (ii) blue peak can make 107.012 more vulnerable.

Keep in mind market is dynamic and presented view could have changed in the mean time. You can check most recent charts in the membership area of the site. Not every chart is Trading Signal. Best instruments to trade are those having incomplete bullish or bearish swings sequences. We put them in Sequence Report and best among them are shown in the Live Trading Room.