In our past article dated Feb 21 titled “Weak NZ Inflation in 4Q 2015 may force RBNZ to cut rate“, we lay out a case that RBNZ (Reserve Bank of New Zealand) is one of the few central banks which still has conventional monetary policy in their toolbox to battle low inflation. With the latest quarterly inflation released in Jan 19, 2016 showing only a 0.1% inflation yoy in New Zealand, as we expected, RBNZ reduced the Official Cash Rate (OCR) by 25 basis points to 2.25% in their last March 9 meeting.

In the same article above, we also mentioned $NZDJPY as the pair to watch since the pair is showing a 5 swing sequence from Oct 23, 2015 and also testing the weekly trend support. The pair didn’t immediately drop after the rate cut. Instead, it rallied until March 31 before turning lower again. Our downside bias however remains the same in the pair, as seen in our 4 hour Elliottwave chart on April 7 below: 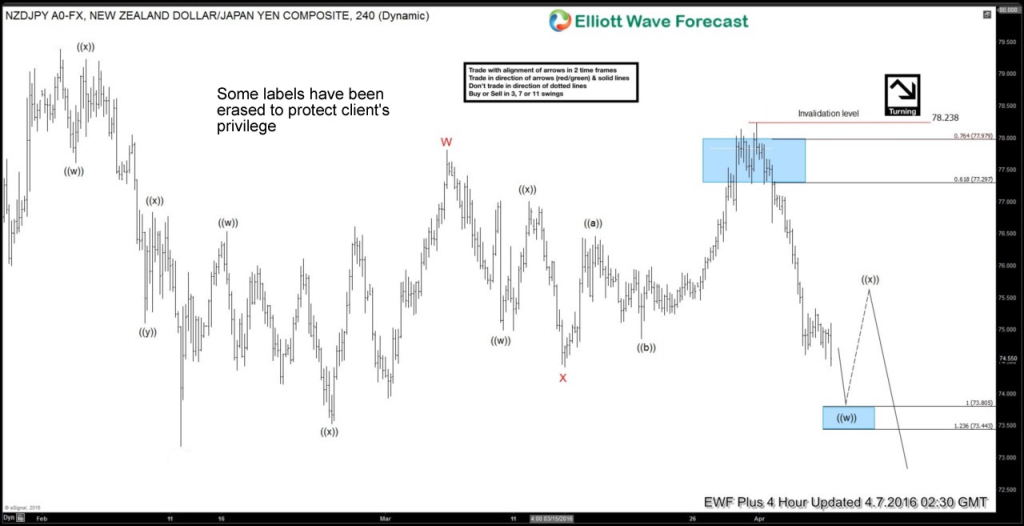 From March 31, $NZDJPY has since continued lower and it looks to have broken below the weekly trend support now, as seen in the chart below. The pair has also made a new low below the Feb 8 low. The balance of evidence therefore suggests that the pair may have more downside. A break below August 24 low at 72.36 should give further weight to the downside. Looking at the weekly chart, the next potential target is 69.25 support. 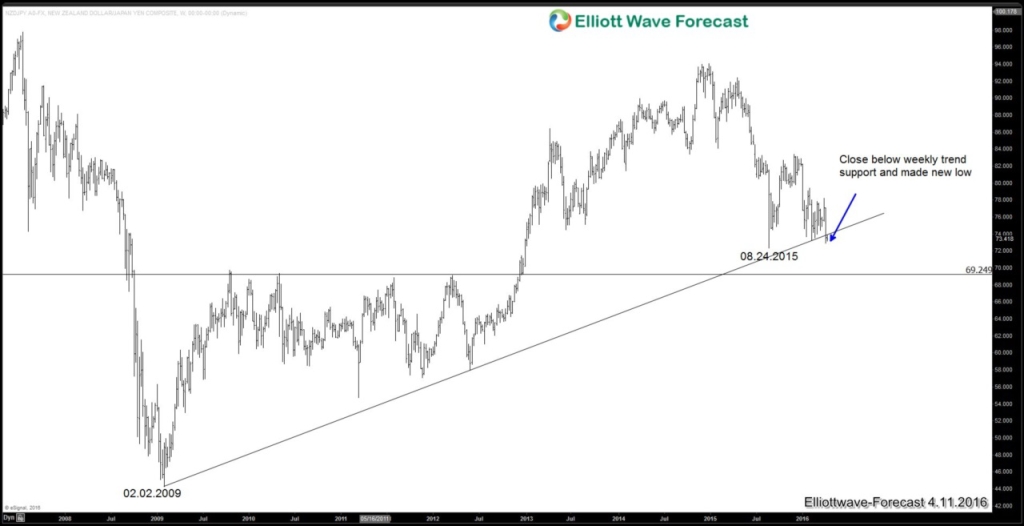 Fundamentally, RBNZ ‘s March Monetary Policy Statement (MPS) mentions that the outlook for global growth has deteriorated due to the weaker growth in China, and headline inflation remains low. In addition, RBNZ also cites the trade-weighted exchange rate is more than 4% higher than projected in December, and that a decline will be appropriate. Lastly, it says further policy easing maybe required. From the language of the last MPS, we can therefore conclude that RBNZ is not very happy with the continued appreciation in New Zealand dollar, and the bank also has some more room to ease policy further if needed to combat low inflation and excessive strength in the local currency.

Both fundamental and technical outlook for the pair seem to suggest the downside as the path of least resistance. Besides, $NZDJPY is typically considered as a carry trade instrument and this type of instrument usually rallies when the risk sentiment is good but falls when volatility is high. Although risky assets (i.e. indices) have risen from the February low, second quarter and summer is seasonally weak for the stock market and thus we can see decent correction in indices if not continuation lower, which can translate to poor performance in carry trade. We have also argued in our article dated April 1 titled “Revisiting China for the Path of Global Indices” that the downside in China market and some other global indices are likely not over yet, and we could be close to the turning point.

Conclusion: Combination of technical factors ($NZDJPY breaking the weekly trend support), seasonality (weak performance in risky assets during summer), and fundamental factors (RBNZ not happy with excessive strength in NZD and the bank’s ability to cut rate further) may give pressure to $NZDJPY during the second quarter and path of least resistance can be the downside.

Knowing the direction however is not enough in trading. More important is the correct trading execution, that is trading in the right inflection areas with a logical entry and defensive plan. For further information on how to find inflection areas to trade $NZD/USD, $NZD/JPY, other forex pairs, indices, or commodities using Elliottwave and our unique trading method of 3-7-11, sign in today for the limited time only FREE 14 Day Trial to see our Hourly, 4 Hour, Daily and Weekly Technical Analysis.