The objective of this blog is to show very briefly the more common patterns and how to use labels for them.

An impulsive pattern is a wave pattern seen during the market moves; it is composed of five wave sequences. In this pattern we have three main criteria: 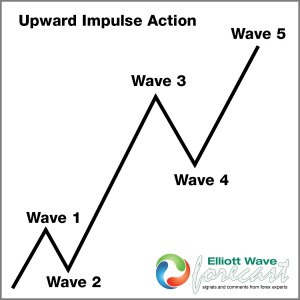 This pattern composed on three wave sequences. In this pattern we have three main criteria:

2) Each leg should have divergence in the peak 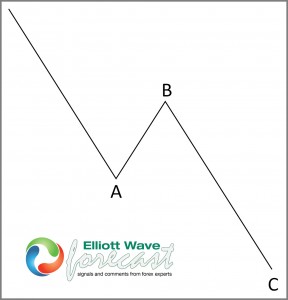 This pattern composed on three wave sequences. In this pattern we have three main criteria:

1) Wave A should be a three wave move.

3) Wave C should be an impulsive pattern.

With regard to point number (2) we can have three different scenarios:

If Wave B does not go beyond start of Wave A: Regular Flat: 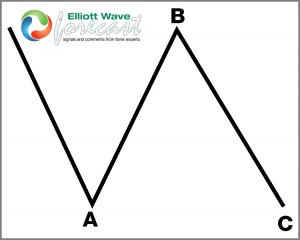 If Wave B goes beyond start of Wave A and Wave C breaks the end of Wave A: Expanded Flat : 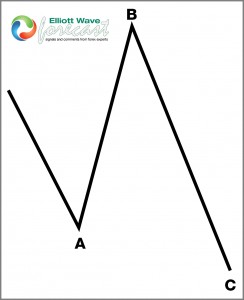 If Wave B goes beyond start of Wave A and Wace C does not break the end of Wave A: Running Flat: 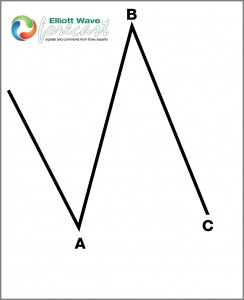 This pattern composed of five contracting wave sequences. In this pattern we have two main criteria:

1) Each wave sequence should be in 3 waves.

2) Each wave should be shorter than the previous wave. 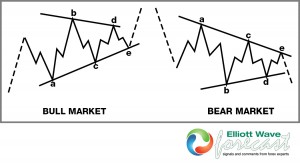 This pattern composed of seven wave sequences. In this pattern we have three main criteria:

1) The first three waves should be a zig-zag.

2) The connector can be any corrective pattern ( zig-zag, Flat or Triangle)

3) The last three waves should be also a zig-zag. 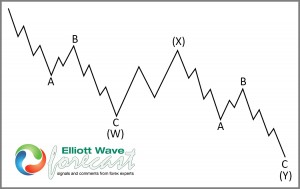 This pattern composed of three wave sequences in which, each wave is composed of any corrective pattern. We can see two examples of double corrections in the following figures: 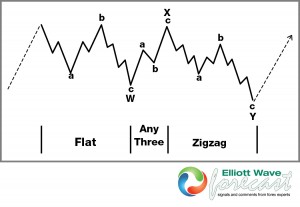 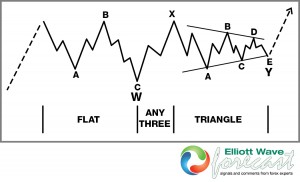 After explaining the patterns labeling in general, we would like to explain here in more details when to label a corrective pattern in A,B,C and when to label it with W,X,Y. As a general rule, the A,B,C label should be used only at least one of the three legs of the pattern is in five waves. Therefore if the first leg is in five waves, we label the pattern with A,B,C but if the first leg is in three waves then by default we label it as W,X,Y and if the third legs comes in five waves (with a deep retracement in wave B justifying 3-3-5 FLAT) then we adjust the labeling to A,B,C.

In order to make this clearer, consider that we have a bull market and this market is going to correct in three waves. If the first leg is in five as you can see in the figure below we have to use A,B,C but if the first leg is in three waves, we start with W and then if the third leg comes in five waves (with a deep retracement in wave B meeting criteria of a FLAT) then we will adjust the wave W to A and use A,B,C. 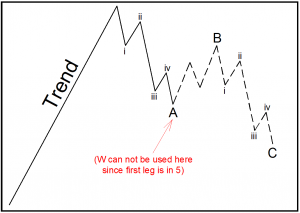 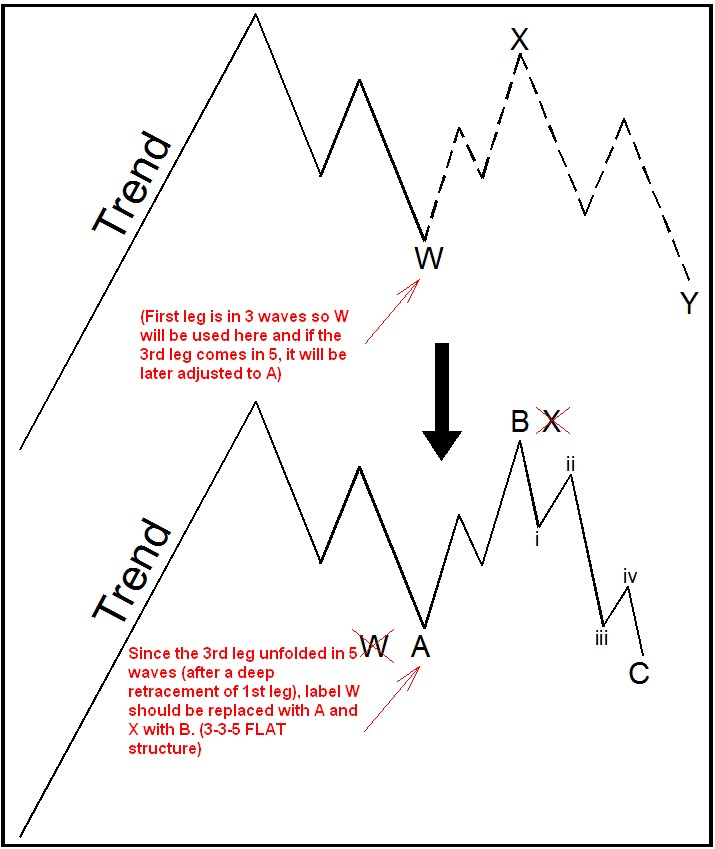 Proper Elliott Wave counting is crucial in order to be successful trader. If you want to learn more on how to implement Elliott Wave Theory in your trading, fell free to join us. You will get access to Professional Elliott Wave analysis in 4 different time frames, 2 live webinars by our expert analysts every day, 24 hour chat room support, market overview, daily and weekly technical videos and much more…

If you are not member yet, just sign up here to get your Free 14 days Premium Plus Trial Welcome to Elliott Wave Forecast !