Double three structures are common occurrences in the market and as it has been pointed out before they can also be the Elliott wave formation that a particular market instrument is trending within the larger degrees and time frames. As pointed out here before, it is simply impossible in some markets to get a legitimate impulsive count as is the conventional 5 waves impulse followed by three corrective waves to retrace the trends progress. That said these may be seen in any time frame or degree. Noted in the graphic below is a correction against a bullish trend which can be applied inversely for a bearish market condition. The leading dotted line can represent either a wave (1), (3) or 5th of a larger degree (A) as in an impulse. It can also represent a wave Y of (W) of a trending move that subdivides as a WXY double three.

As for the double three correction example in the graphic beginning at the solid line it shows an a, b & c flat W however it is not a requirement for those first three swings to be a flat, as it may be a zig-zag or a 7 swing w, x & y double three itself however an initial wave W will never be a stand alone triangle. The same can be said of a wave 2 as it will never be a stand alone triangle. A common measured move of c being equal to or 1.236 extension area related to the wave a is common area for the wave c of W to end. Continuing on after the W, the X wave in the graphic may be anything such as a flat, zig-zag, double or triple three structure. It is very common to see the X become a triangle. For purpose of this illustration we’ll say this is a double three, a, b & c. Again the c of X wave will likely end in the equal legs-1.236 extension area related to the wave a.

After completion of the wave X the illustration continuing down in the solid line it shows a zig-zag a, b & c of Y that ends the double three corrective cycle. Again it is common to see this leg Y will likely end in the equal legs-1.236 extension area of the relationship to wave W of same degree and after completion can be labeled as the next larger degree wave (2), (4), (B), or (X). Afterward the market resumes the previous trend higher in the dotted line. 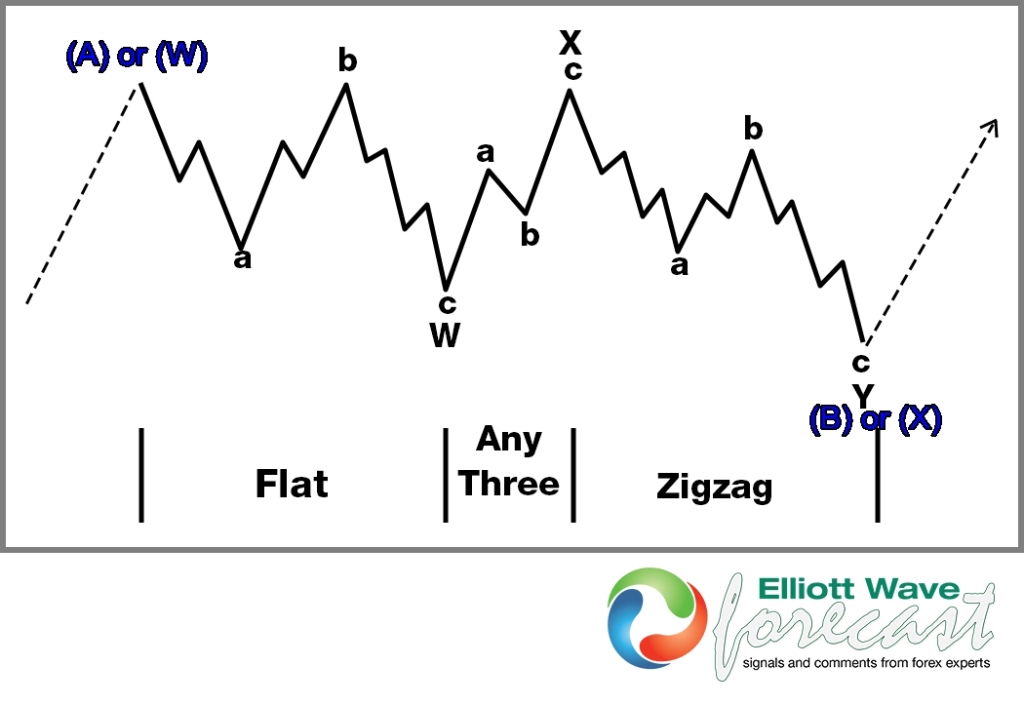