The Fibonacci ratio relationships are as follows. Wave X will retrace anywhere from 50%, 61.8%, 76.4%, or 85.4% of wave W. Wave Y can not pass 161.8% of wave W or it can become an impulsive wave three. The second wave X will retrace the wave Y in the same aforementioned Fibonacci retracement levels as it did the wave W. The second wave X structure does not have be the same structure as the first wave X. The Wave Z target area to finish the triple three correction will be a Fibonacci extension 61.8%, 100%, or 123.6% of the wave W.

The graphic below is an example of three corrective structure combinations that can form triple three corrections. In this one wave W is an expanded flat with a zigzag connector first wave X. This is followed by a double three wave Y. The second wave X connector is a zigzag. Lastly the wave Z is also a zigzag. Continued below the graphics. 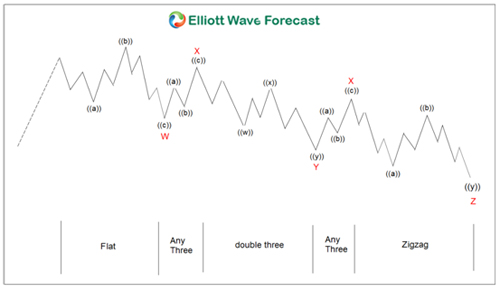 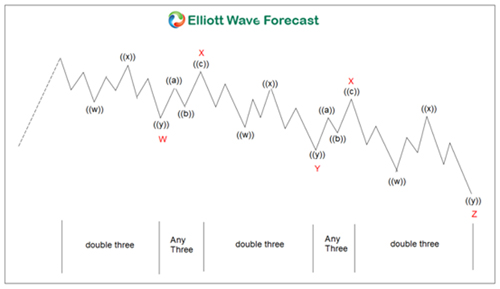 In conclusion. As has been noted triple threes are a combination of three corrective patterns. They can occur in either a bearish trending market or as in the illustrations shown above a bullish trending market.

Thanks for looking. Feel free to come visit our website. Please check out our services Free for 14 days and see if we can be of help. Kind regards & good luck trading. Lewis Jones of the ElliottWave-Forecast.com Team